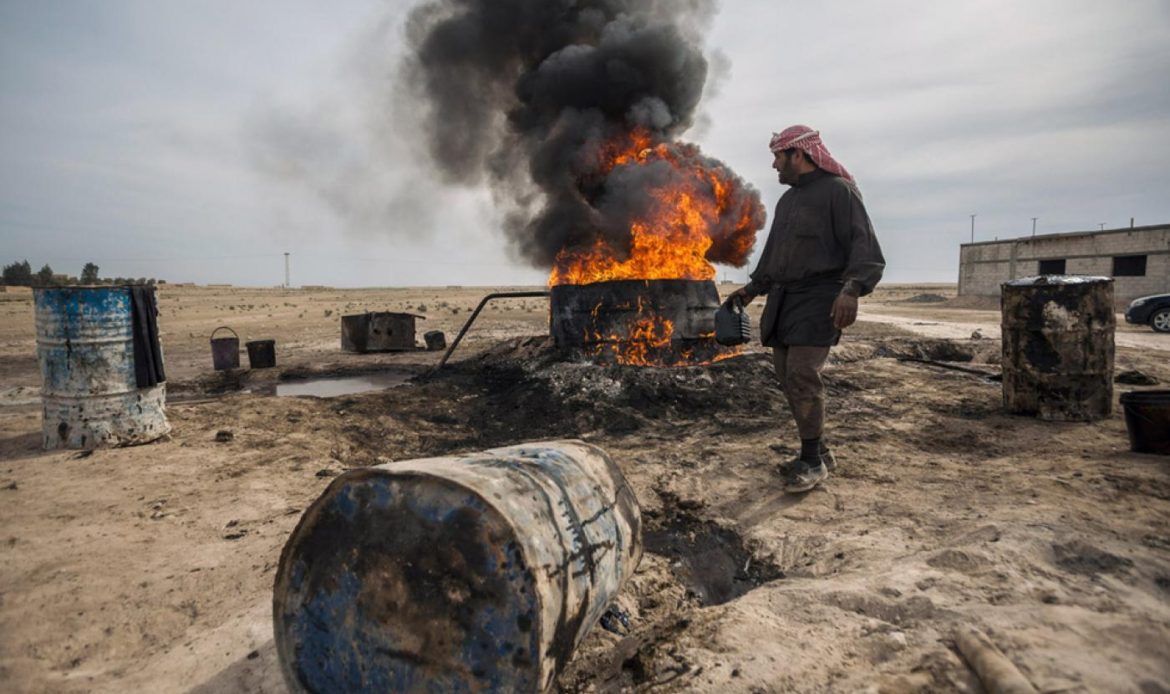 Trump slides an American foot in the door in Syria

In a shocking reversal in Syria, President Trump has ordered the US military to occupy the oil field at Deir Ez Zor, in eastern Syria.

At first glance, it would appear to be a businessman’s plan to plunder the profits of Syria, and he has quoted profits expected and even ear-marked the profits to support the Syrian Democratic Forces (SDF) who are a Syrian Kurdish militia who had been on the US payroll as mercenaries in the past fight against ISIS.

The oil production facility at Deir Ez Zor is destroyed, and incapable of production or generating profits.  The Syrian oil ministry was producing oil there in 2011, eventually the Al Qaeda branch in Syria, Jibhat al Nusra, over-ran the place, and began a period of stealing the oil and smuggling it to Turkey, where Bilal Erdogan, son of President Erdogan, handled the black-market oil and re-sold it to European customers, with the profits going to the Erdogan family privately. Erdogan sought to legitimatize the source of the oil, by using the term “Syrian Opposition”.

ISIS then burst onto the scene, and captured the place from their enemy Jibhat al Nusra; however, the smuggling business and Erdogan partnership continued uninterrupted.  During the US Coalition airstrikes on ISIS targets in Syria, the location had numerous direct hits, which left the facility destroyed and inoperable, and by 2017 was in the hands of SDF. Russia was invited by the Syrian government to enter Syria militarily in late September 2015.  By October Russian air force had begun striking ISIS convoys of tanker trucks carrying smuggled oil to Turkey. This action was one of the main causes of ISIS’s defeat.

In 2008 Syria’s production ranked globally #43 in gas and #31 in oil.  Experts suggest the current losses to the Syrian energy production are over $62 billion. There are oil and gas fields scattered all over Syria, and many are in the northeastern section which is currently a conflict-zone.  The SDF alongside a very small contingent of US troops had been in control of the northeast of Syria, but recently Trump surprised many when he ordered a total withdrawal of US troops in the area, ahead of a Turkish invasion named “Operation Peace Spring”, which was more about war than peace.  For years, Erdogan had complained to Trump that the SDF were armed terrorists aligned with the PKK, who have killed over 40,000 people in Turkey over 30 years of terrorism.

Trump did not condone the Erdogan invasion of Syria, or the heavy-handed attack on Kurds, including unarmed civilians.  Erdogan was using Syrian mercenaries who had formerly fought in the ranks of Jibhat al Nusra and ISIS, while the US-NATO plan for ‘regime-change’ was being waged against President Assad, which had been formulated and supported by President Obama, and almost every leader of the ‘free’ world.

The US occupation of the oil production facility at Deir Ez Zor is strategic for the US, and EU foreign policy on Syria, which depends on sanctions to keep the Syrian civilians and government from importing any necessary supplies to repair and re-build Syria, now that the war is over.  Syrians are prevented from importing oil due to the sanctions, and without oil, the country cannot re-build. If the Syrian oil production facilities were to be in the hands of the legal owners, the Syrian Ministry of Oil, then repairs could be carried out and Syria would no longer need to import oil, and they could go back to being energy sufficient, as they were before 2011.

Russian Defense Ministry, Maj. Gen. Igor Konashenkov spoke about satellite images in Syria which show the extent of past US involvement in the oil smuggling business, which was conducted with the Kurds using a US company “Sadcab”, and the profits were funneled through US private military contractors.

It is, therefore, of the utmost strategic importance for the US to keep its foot in the door, and prevent being shut-out.  Trump acted too quickly in withdrawing troops, and without consulting the authors of the US foreign policy on Syria, which many analysts agree is written in Tel Aviv.  He then corrected the course by ordering the troops and tanks to occupy the Deir Ez Zor oil facility.

The US occupation of the Deir Ez Zor oil production facility is about politics, not economics.  Trump is the author of “The Art of the Deal”, and his end-game may be about using the Deir Ez Zor card as a bargaining chip.  The main reason for the US-NATO attack on Syria, beginning in 2011, was to take control of the oil and gas fields in the Mediterranean Sea off the coast of Syria, and to control the route of oil/gas pipelines through Syria, and to prevent Russia from being involved; however, Russia was able to thwart the plan.

Trump inherited the war in Syria, which the US lost.  The future of Syria includes roles by Russia, Iran, Iraq, and China.  The US backed the Muslim Brotherhood, and their allies in Israel, Turkey, Saudi Arabia, and Qatar, which ended up to be the losing ticket in the horse race.