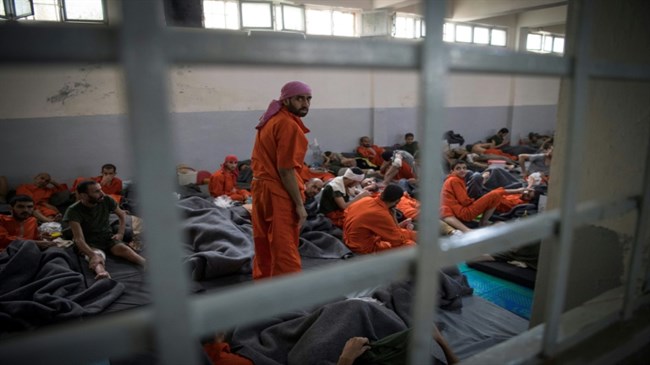 Turkey: Daesh prisoners will be sent back to home countries in Europe

Turkey says it will send foreign members of the Daesh Takfiri terrorist group back to their home countries in Europe after the suspected militants were captured by the Turkish army troops during Ankara’s cross-border offensive into northeastern Syria.

Turkish Interior Minister Suleyman Soylu made the remarks in a press conference on Saturday, saying that Ankara would return the captured militants to their countries of origin despite the unwillingness of European countries to take them in.

“We will send the captured Daesh members to their countries,” Soylu added, complaining about European inaction on the matter.

Turkish military forces and militants of the so-called Free Syrian Army (FSA), who enjoy Ankara’s patronage, on October 9 launched a cross-border offensive into northeastern Syria in a declared attempt to clear Kurdish militants from the so-called People’s Protection Units (YPG) from border areas.

Ankara regards the US-backed YPG as a terrorist organization tied to the homegrown Kurdistan Workers’ Party (PKK) militant group, which has been seeking an autonomous Kurdish region in Turkey since 1984.

Turkeys says its troops have managed to capture some escaped Daesh terrorists over the last month since the onset of the offensive, called Operation Peace Spring. These terrorists had escaped from a prison in northeastern Syria following the Turkish military operation.

“We are not going to keep them until the end of time. We’re not a hotel for Daesh,” Soylu further said, adding that his country would only hold captured militants “for some time. After that we’ll send them back to their countries.”

According to the Turkish minister, member states of the European Union (EU), including the Netherlands and Britain, have already stripped some of the Daesh militants of their nationality to prevent Ankara from sending them home.

“They found an easy solution. They say ‘I took his nationality away, it’s your problem now’. That’s unacceptable in our view, that’s totally irresponsible. What do you want me to do with your terrorist?” Soylu further said.

There are thought to be at least 10,000 detained suspected Daesh terrorists imprisoned in northeastern Syria, with another 100,000 family members held at displaced person camps, including 70,000 in al-Hol refugee camp.

Kurdish officials say nearly 800 Daesh prisoners have managed to escape from a prisoner camp after the Turkish offensive.

Some European countries have commenced talks with Iraqi officials to enable captured Takfiri militants being held in Syria to face trial in Iraq, but progress appeared slow.

Daesh has already been driven out of all its urban bastions both in Iraq and Syria, but its remnants carry out sporadic terror attacks in both Arab countries.