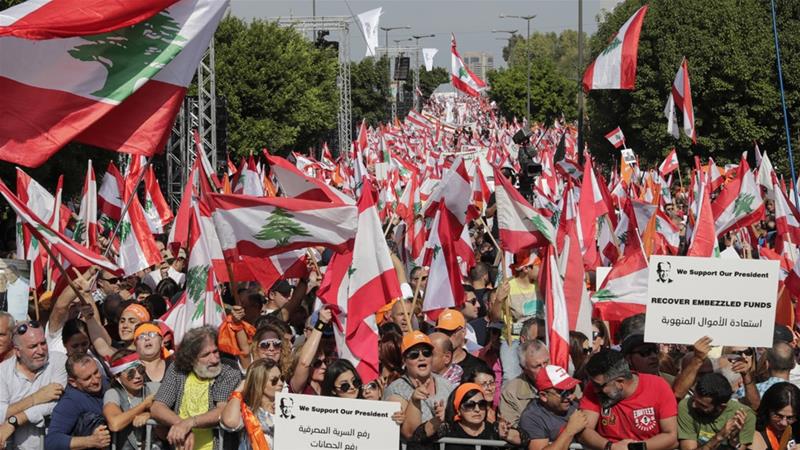 Thousands of people in Lebanon have held a rally in support of President Michel Aoun, after more than two weeks of anti-government demonstrations that ultimately forced Prime Minister Saad Hariri to step down over a troubled economy.

Supporters mostly rallied outside the presidential residence, the Baabda Palace, near the Lebanese capital, Beirut, on Sunday to pay tribute to Aoun, 84, ahead of a rival rally planned in the capital to demand a complete overhaul of a political system allegedly beset by corruption.

The supporters of the president, a retired general-turned-head of state, filled up a two-kilometer-long highway leading to the palace, which is located on a hill in the mountain town of Baabda, overlooking Beirut.

They were reacting to cross-sectarian calls for Aoun to follow Hariri’s suit.

Addressing thousands of his supporters on Sunday, the Lebanese president called on them to rally behind reforms as the sole way out of the country’s ongoing crisis.

Speaking in a live televised address, Aoun said, “I call on you all to unite,” warning against having “one protest against another.”

The president added that a roadmap has been drawn up to tackle corruption, redress the country’s economy, and put together a civil government.

“It won’t be easy, and we want your efforts,” he said, leaning on a pulpit inside the palace in the town of Baabda outside Beirut, AFP reported.

During a speech delivered after Hariri’s resignation, the president indicated support for a more technocratic government, noting that ministers should be selected “according to their competencies and expertise, not political loyalties.”

The sea of demonstrators waved large national flags along with the orange-colored banners of Aoun’s political party, the Free Patriotic Movement, while his portraits could be seen here and there across the highway.

“We are here, General. We won’t abandon you as long as we live,” one poster read.

Since October 17, people have been taking to the streets in Beirut and other cities to express discontent with the government’s failure to find solutions for the country’s economic crisis. The unprecedented protests seem to have been triggered by planned taxes on gasoline, tobacco, and online phone calls, such as on WhatsApp.

Hariri, who resigned on Tuesday, hailed from a different political background than President Aoun. And since earlier this week, a level of normality has returned to the Mediterranean country.

“General Aoun is a reformist and sincere man — neither corrupt nor a thief,” said one of Aoun’s supporters, adding, “There has been corruption in the state for 30 years. The president isn’t responsible. He’s trying to fight against graft.”

The Sunday rally has been the biggest counter-protest to the massive wave of anti-government demonstrations so far.

“We’re here to say to Aoun that we love you and renew our trust in you,” said a demonstrator.

“If people don’t join hands with the president, there will be no Lebanon,” said another.

According to the World Bank, more than 25 percent of the Lebanese live in poverty.