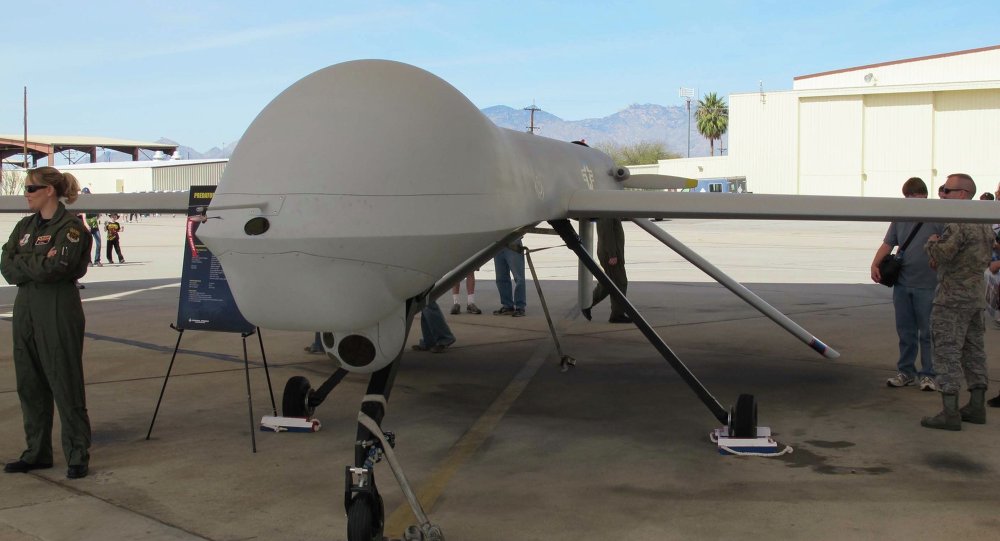 A dangerous escalation of tensions near the Gaza Strip border comes against the backdrop of Tel Aviv’s threat to launch a ground war on the Palestinian enclave, as Israeli fighter jets struck targets in Gaza in retaliation for recent rockets launched from near the border.

Hamas says it has shot down an Israeli drone in the northern Gaza Strip, according to Al-Arabiya.

According to Al Mayadeen TV, the drone that was shot down was a quadcopter.

Amid other conflicting accounts, Al Ain said that Hamas was able to take possession of the drone, while the Israeli daily The Jerusalem Post cited some reports as saying that the drone had flown out of the area after being shot at.

The IDF has not yet offered an official comment regarding the incident.

News of the current alleged downing of a drone comes amid heightened tensions in the region, as Israeli combat planes struck military compounds affiliated with Hamas in the Gaza Strip in response to what it claimed were rocket attacks from the Palestinian enclave, the Israel Defence Forces (IDF) said in its statement on Saturday.

A Palestinian man died as a result of Israeli airstrikes in the Gaza Strip, Ashraf al-Qidra, a spokesman for Gaza’s Health Ministry, said Saturday.

According to the IDF, on 2 November a total of 10 rockets had been fired from the direction of Gaza, including eight projectiles that had been intercepted by the Iron Dome air defence system.

Israeli Prime Minister Benjamin Netanyahu said that Hamas was responsible for all rocket attacks against Israel from Gaza.

A Hamas official told Haaretz on Saturday the rockets that were fired into southern Israel on Friday night from Gaza were not launched by one of the major factions in the Strip, adding this was an act of defiance against Hamas by unknown factors.

Israel “will be forced” to launch a military operation in Gaza unless the situation on the borders is normalised after the recent fire exchange with the Hamas movement, Israeli Energy Minister Yuval Steinitz said in a Sunday interview with ”Galei Tzahal” (Israel’s Army Radio).

“If there is no way out, we will also start a ground operation to destroy the Hamas rule [in Gaza]”, the Minister said.

On Sunday, Israeli cabinet ministers held a meeting in connection with the recent military escalation in Gaza.

Israeli Prime Minister Benjamin Netanyahu said that the situation near the eastern, northern and southern borders of the country had become ”explosive” and the government should continue to work ”in all directions” to ensure security.

GAZA hamas israeli_OCCUPATION Palestine
Previous ArticleBlack Gold: Who Controls Syria’s Oil, and How Much is It All Worth?
Next Article Islamic State (ISIS-Daesh) Exacts Revenge on Turkey for Selling Al-Baghdadi Out