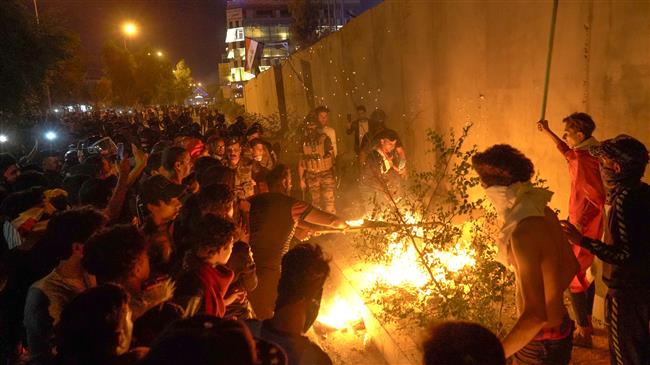 Iraq’s Ministry of Foreign Affairs has condemned an attack on the Iranian consulate in the holy city of Karbala, reaffirming Baghdad’s commitment to protection of diplomatic missions in the Arab country.

The ministry censured on Monday the attack by a group of so-called demonstrators on the Iranian consulate and voiced Baghdad’s commitment to the security and “inviolability” of foreign missions in the country.

“The Ministry of Foreign Affairs condemns the attack by some demonstrators on the Consulate General of the Islamic Republic of Iran in the holy city of Karbala, and reaffirms the ministry’s commitment to the inviolability of diplomatic missions guaranteed by the Vienna Convention on Diplomatic Relations and the need not to endanger their security,” the statement said.

The ministry said diplomatic missions in Iraq have been established on bilateral agreements, adding that they need to be respected and their security must not be endangered.

“The security of foreign missions and consulates is a red line [for Iraqi authorities] and no encroachment would ever be permissible,” the statement noted.

The protesters reportedly scaled the concrete barriers surrounding the diplomatic complex in Karbala late on Sunday and spray-painted scurrilous writings on its perimeter walls.

Some other demonstrators also threw stones and burned tires around the Iranian consulate building, prompting Iraqi security forces to fire in the air to disperse the crowd.

Reports said no serious damage was inflicted on the diplomatic mission building and the Iranian staff and diplomatic employees were uninjured.

On Sunday evening, Qais Khazali, the leader of the Asa’ib Ahl al-Haq, which is part of Iraq’s Popular Mobilization Units (PMU), said Israel and the United Arab Emirates are playing “a bigger role than the US and Saudi Arabia” in the protests, which have gripped the country.

Khazali added that Israel’s Mossad is operating in several provinces in Northern Iraq, including Sulaymaniyah city, and runs a “joint base” with the CIA and Mossad at Baghdad airport.

“Mossad is attempting to use some defectors of certain Iraqi parties to increase clashes and the Ba’athis are also one of the main pivots to provoke unrest in Iraq,” he said.

Many experts and analysts are of the opinion that both Israel and the US are playing a high-key role in stoking unrest in the Arab country.

US President Donald Trump, who is known for his deep-seated animosity toward Iran, reacted to the attack on the Islamic Republic’s consulate in Karbala by retweeting an original Twitter post by the Saudi-backed London-based Iran International network, which posted footage of the attack.

On Monday, the Israeli foreign minister, Israel Katz, took sides with attackers on the Iranian diplomatic premises in Karbala, accusing Iran of what he called “murdering demonstrators in Iraq.”

He also claimed that Iran’s Islamic Revolution Guards Corps (IRGC) and commander of its Quds Force, Major General Qasem Soleimani were behind repression of Iraqi demonstrators.

The top general leads the elite Quds Force of the IRGC, and is widely known as one of the most influential military commanders in the world.

General Soleimani made headlines last July, when he delivered a blistering response to an all-caps tweet addressed to Iranian President Hassan Rouhani, in which Trump had issued a military threat against the Islamic Republic.

The IRGC commander is widely seen as a strategist and adviser in the counter-terrorism operations against Takfiri terrorists in Syria and Iraq.

The powerful general leads Iranian military advisers backing the national armies of Syria and Iraq in their fight against terrorism.

General Soleimani was present on the ground to supervise the decisive stages of Iran-backed operations against Daesh, which lost in late 2017 all the territories it had seized in Iraq and Syria.

He declared the end of Daesh’s territorial rule in a letter addressed to Leader of the Islamic Revolution Ayatollah Seyyed Ali Khamenei in November 2017. Ayatollah Khamenei had earlier described him as a “living martyr.”