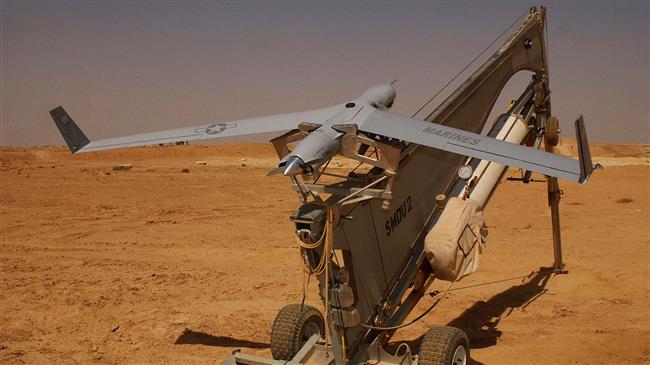 Yemeni army forces, supported by allied fighters from Popular Committees, have intercepted and targeted an unmanned aerial vehicle belonging to the Saudi-led military coalition in the skies over the kingdom’s southern border region of Najran, in retaliation for the alliance’s military aggression against their conflict-stricken country.

The spokesman for Yemeni Armed Forces, Brigadier General Yahya Saree, wrote in a post published on his Twitter page that Yemeni forces and their allies shot down the drone over al-Sawh area of the region, situated 844 kilometers (524 miles) south of the capital Riyadh, on Tuesday morning.

He added that Yemeni army forces and Popular Committees fighters targeted the unmanned aerial vehicle with a proper missile as it was carrying out “reconnaissance and hostile acts” in the area.

The development came less than a week after Yemeni forces and their allies shot down a US-made and long-endurance ScanEagle drone as it was flying over the Yemeni-Saudi border.

There were, however, no immediate reports about the extent of damage caused and possible casualties.

Saudi Arabia and a number of its regional allies launched a devastating campaign against Yemen in March 2015, with the goal of bringing the government of Hadi back to power and crushing the Houthi Ansarullah movement.