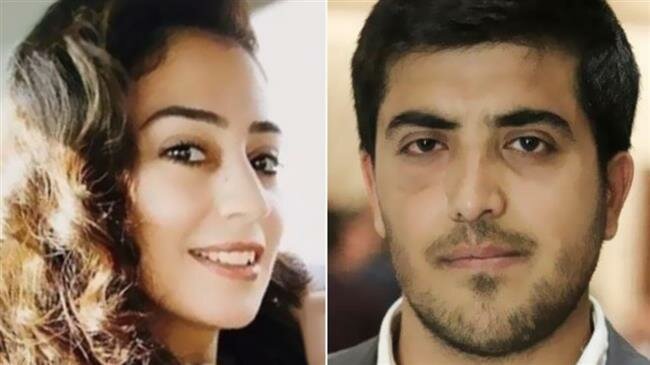 Two Jordanians being held in Israeli detention without charges released

Israeli authorities have released two Jordanian citizens, who were arrested after crossing the kingdom into the occupied West Bank and being held in detention without charges for the past two months.

Jordanian television network confirmed on Wednesday that Heba Abdel-Baqi al-Labadi and Abdul Rahman Mari had been freed and arrived in the capital Amman.

Labadi’s father said his daughter had met with her family on the Jordanian side of the border, adding that she will undergo medical examinations at King Hussein Medical Center in Amman.

“We are very excited and happy that Heba is back home and free. We were very worried for her well-being, and there was a genuine concern to her life due to the harsh conditions she was under during her detention and her 42-day hunger strike,” Labadi’s family said in a statement.

“We thank everyone who supported Heba in her struggle and her release, while stressing the efforts invested by the Jordanian government to free her. We are aware that there were those who supported Heba’s release within Israel,” said Labadi’s mother in an interview with the Arabic-language Radio al-Shams station.

Jordanian Foreign Minister Ayman Safadi noted that the decision to release Labadi and Mari comes after long, intense negotiations between Amman and Tel Aviv, and that Jordan’s King Abdullah II did everything he could to promote their release.

Jordan’s Ambassador to Israel Ghassan Majali, who was summoned for consultations last week to protest the detention of the two Jordanian nationals, will return to the occupied territories in the coming days.
Labadi holds a Palestinian identity card. She was arrested on August 20, when she crossed the King Hussein Bridge, also known as the Allenby Bridge, which crosses the Jordan River near the Palestinian city of Ariha and connects the West Bank with Jordan, with her mother and aunt on their way to a relative’s wedding in the northern West Bank city of Jenin.

According to her attorney, Raslan Mahajna, she was suspected of meeting with people affiliated to the Lebanese resistance movement Hezbollah during trips to Beirut both last year and early this year.

Mahajna added that Labadi often voices her views against the Israeli regime’s occupation of Palestinian territories on social media networks.

“She was interrogated intensively for 35 days, and in the end, there was no basis for indicting her, so she was slapped with an administrative detention order,” he said.

“She’s been on hunger strike, because in her view, this was an arbitrary, unjustified arrest.”

Labadi was reportedly being held at Kishon prison, also known as the al-Jalame detention center.

Arabic-language Arabi 21 online newspaper reported that Mari was arrested on September 2 as he was going to attend the wedding of a relative in the northern West Bank city of Nablus.

The 29-year-old man, a resident of the Abu al-Zayegan area in the central Jordanian city of Zarqa, had traveled with his mother through the King Hussein Bridge.

His family said they had not been able to contact him since his arrest, and had not been told the reason for his detention. Mari is said to be suffering from cancer. His relatives were concerned his medical condition would deteriorate in jail.