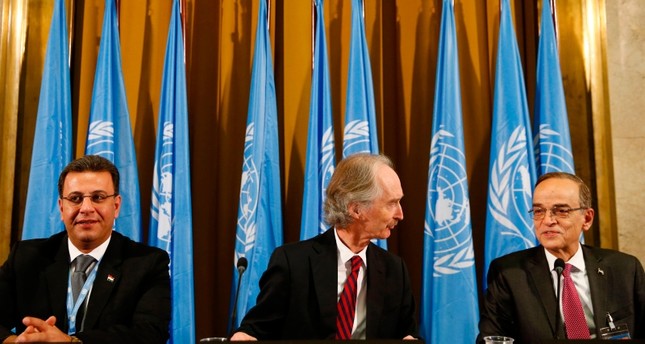 Geneva is key to Syria’s recovery

The political solution to the Syrian conflict is the task at hand for the constitutional committee that has been meeting in Geneva since October 30.  The co-chairs are Ahmad Kuzbari from the Syrian government and Hadi Albahra from the opposition.  The Mini-Committee continued activities on Wednesday for the fourth successive day at the UN headquarters in Geneva while working towards amending the constitution for Syria, which is seen as the roadmap to recovery. The 45-member committee equally divided between the Syrian government, the opposition and civil society will hold a four-hour session per day. The full committee consists of 150 members: 50 each representing the Syrian government, the opposition, and civil society. The political solution is necessary before the US and EU sanctions against Syria are lifted, western embassies reopen in Damascus, and reconstruction funds are pledged to rebuild Syria.

Those representing the Syrian government are a cohesive and unified group; however, the group representing the Syrian opposition is extremely varied in their ideology and it is difficult for them to speak with one voice. Some of those opposed to the Syrian government from the outset of the conflict were secular, liberal dissidents living abroad in western countries; however, the Syrian Islamists, especially the Syrian branch of the Muslim Brotherhood, established close relationships early-on with the US State Department, and the Americans preferred supporting the faction following Radical Islamic political ideology rather than the secular, liberal dissidents.

The current opposition has been overrun by radicals aspiring to a Syrian Sunni State, and the groups affiliated with Al Qaeda and Ahrar al-Sham, which left the non-radicals feeling marginalized.  It was the Obama administration that gave its full support to the Islamists, but it was the Trump administration that shut off that support; however, the US insisted the Syrian Islamists be represented in the Geneva talks while excluding the Kurds at the request of Turkey.

Last week, UN special envoy for Syria Geir Pedersen delivered the Code of Conduct approved by the Syrian opposition and the Syrian government which stipulates that the negotiating parties “show respect and tact toward members and refrain from inflammatory speeches and personal attacks”.  In his opening remarks, he said, “I know that it is not easy for all of you to be here together in this room.”  Despite the opposing side’s deep divisions of ideologies, they all have a similar goal to amend the constitution which can begin the healing process.

Opposition sources said their delegation has submitted a working paper of the proposals presented last week, adding that the civil society representatives presented a range of proposals orally during Wednesday’s meeting.  The Committee will attempt to arrive at its decisions by consensus; however, if that fails they may resort to a majority of 75 percent of votes.

There is no Kurdish representation in the constitution committee.  In a recent interview with the Kurdish General Mazloum Abdi, he said, “Definitely, the Kurdish issue is an essential one and the rights of Kurds have to be ensured in the Syrian constitution.” He added, “We are here and will stay until there is a solution in Syria, and all [ethnic and religious] groups in Syria reach a deal and agree on a constitution and establishment.” The Syrian Democratic Forces and allied militias, composed of mainly Kurds, have more than 100,000 soldiers and had been US allies previously in the fight to defeat ISIS which occurred in Syria.

The diplomatic gymnastics among Presidents Assad, Putin, Erdogan, and the Kurds are in high gear. The Turkish foreign minister has said Turkey would retreat from all occupied areas if the Syrian government would assure the Kurdish self-administration project was dismantled, and the Kurdish militias were dissolved and integrated into the Syrian Arab Army.  Talks could begin on the eventual return of the 3.6 million Syrian refugees in Turkey to their original communities, thus avoiding a ‘safe-zone’ in northeast Syria, which Erdogan had planned as a Sunni non-Kurdish plantation.  President Putin’s backchannel diplomacy between Damascus and Ankara is ongoing.

In last week’s interview, President Assad said he did not expect the Kurds “to hand over their weapons immediately,” adding that while the Syrian state would exert control in the northeast, “Our policy should be gradual and rational and should take the facts into account.”

The current military maneuvers and confrontations in northeast Syria are the beginning of the end of the Syrian conflict, as each of the various players involved on the ground will make deals based on negotiated settlements.  To keep one foot in the door, Trump ordered his military to re-invade Syria from Iraq, to occupy the oil well at Deir Ez Zor. General Mazloum Abdi believes the US move has nothing whatsoever to do with oil or profits from oil.  He said, “There was a new [power] balance here. The Americans want to stay here to take part in the balance.”

Idlib and the northeast may be returned to the control of the central government in Damascus, and with a possible new constitution in place, and future elections scheduled under UN observation, Syria may once again return to the peace and security that has been missing since 2011