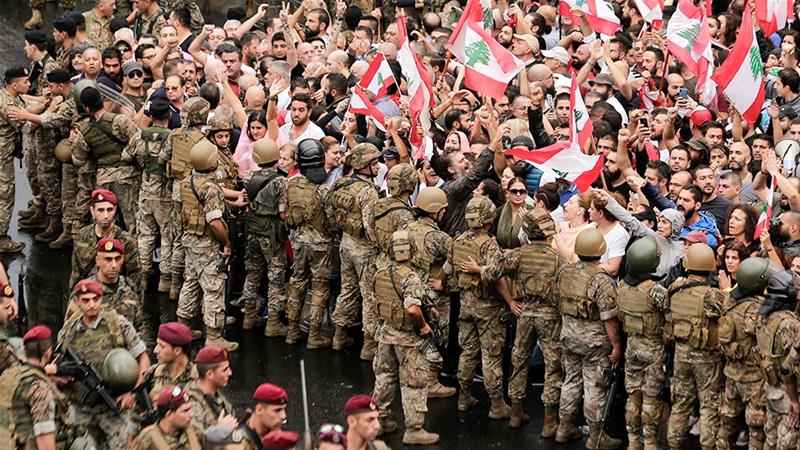 Thousands of people have held yet another ant-government rally in Lebanon against alleged corruption.

On Tuesday, banks and schools were closed in Lebanon as thousands of demonstrators took to the streets in the capital, Beirut, and some other cities and towns and attempted to prevent employees from clocking in at state institutions.

In the town of Aley, east of Beirut, the southern city of Tyre, and the eastern town of Baalbek, protesters held sit-ins outside and inside the offices of the state telecommunications provider.

Since October 17, people have been holding protest rallies in Beirut and other cities to express discontent with the government’s failure to find solutions for the country’s economic woes.

The unprecedented protests, which ultimately forced Prime Minister Saad Hariri to resign over a troubled economy on October 29, seem to have been triggered by planned taxes on gasoline, tobacco, and online phone calls, such as on WhatsApp.

The cross-sectarian mobilization is demanding the ouster of a generation of politicians seen by protesters as inefficient and corrupt.

Separately on Tuesday, President Michel Aoun met with representatives of the International Support Group for Lebanon and briefed them on his position regarding the persisting demonstrations.

“Very soon there will be a Lebanese government ready to implement the planned reforms for the current crisis,” said Aoun, who will appear in a television interview to discuss “current developments” on Tuesday evening.

Additionally on Tuesday, the top United Nations official in the Arab country called for the urgent formation of a cabinet consisting of competent people.

“The financial and economic situation is critical, and the government and other authorities cannot wait any longer to start addressing it,” said the UN Special Coordinator for Lebanon Jan Kubis after meeting with Aoun along with a group of foreign ambassadors.

He added that the formation of a competent cabinet would put the country in a better position to appeal for international support.

Government formation typically takes months in Lebanon, with protracted debates on how to best maintain a fragile balance between ethnic and religious communities.

The country is in urgent need of economic reforms. According to the World Bank, more than 25 percent of the Lebanese live in poverty.