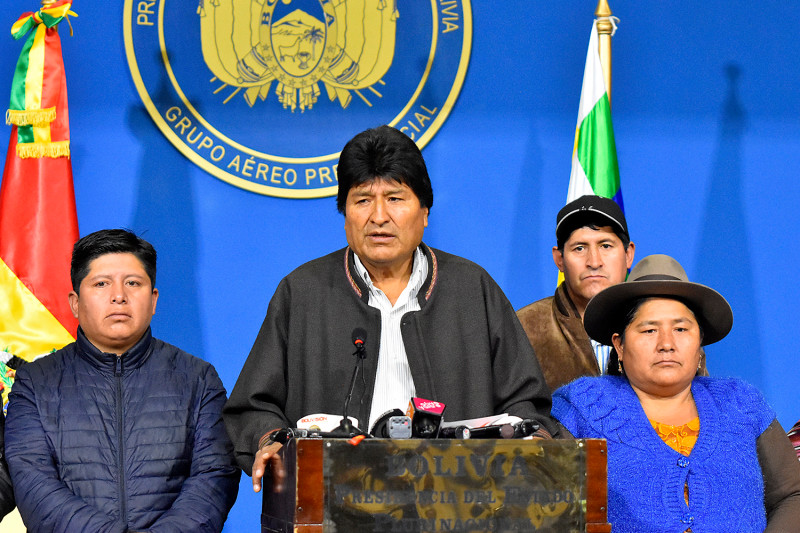 LA PAZ, BOLIVIA - NOVEMBER 10: President of Bolivia Evo Morales Ayma talks during a morning press conference when he announced he was going to call for fresh elections after OAS questioned the results of elections held on October 20th on November 10, 2019 in La Paz, Bolivia. Later today, Morales announced his resignation in Chimore, Cochabamba. (Photo by Alexis Demarco/APG/Getty Images)

Bolivia’s President Evo Morales Is Backtracking Under Heavy US Pressure

Bolivian President Evo Morales‘ decision to abide by the “recommendation” of the US-backed OAS that his country hold another election represents serious backtracking on his pro-sovereignty stance under heavy Hybrid War pressure following the mutiny of several police forces across the nation and the military’s refusal to restore law and order amidst several weeks of rioting.

Bolivian President Evo Morales stayed true to his word that he’d abide by the “recommendation” of the US-backed OAS following the conclusion of their audit on last month’s election by calling for another vote in the coming future. The organization alleged that it was “statistically unlikely” that he won a little more than 10% of the vote and narrowly avoided a second round of elections, claiming that there was “clear manipulation” of the process at play.

President Morales’ decision to heed their “advice” represents a serious backtracking on his pro-sovereignty stance under heavy Hybrid War pressure after the mutiny of several police forces across the nation and the military’s refusal to restore law and order amidst several weeks of rioting. Had he been able to count on the armed forces’ support in quelling the disturbances, he wouldn’t have had to tacitly acknowledge that his latest re-election was possibly “fraudulent”, which therefore throws his legitimacy as the current head of state into doubt.

It’s somewhat understandable that he’s taken the position that he did because the US and its regional allies likely had a preplanned sanctions scheme that they were ready to roll out had he refused to comply with their de-facto demand, one which might have resulted in Bolivia’s top trading partner, Brazil, blockading the country and immediately triggering an economic crisis at home to compound the ongoing political one. Furthermore, the “opposition’s” threats to shut down the border and stop traffic along some of the country’s main roads could have worsened this scenario and brought Bolivia to a standstill. Nevertheless, there isn’t any guarantee that his opponents won’t be emboldened by his backtracking if they believe that he’s doing so from a position of weakness and that they only need to increase the pressure for a little longer in order to compel him to resign. After all, they can always argue that his current tenure isn’t legitimate since he’s sitting in office after a “suspicious” vote that he himself recognizes might have been “fraudulent” since he decided to hold another election after the last one was found by the US-backed OAS to have supposedly been rigged.

There are several key variables that will determine the course of forthcoming events. The first is whether or not the “opposition” will de-escalate their Hybrid War campaign against President Morales. If they follow his lead and start backtracking on their demands that he resign, then it would be a sign that they want to return to the status quo “ante bellum” prior to the “disputed” vote. On the other hand, they might just press forward with those same demands and insist that he must resign before the next vote takes place and that a “caretaker government” assume control of the state in the interim to ensure that the forthcoming elections are conducted in a “free and fair” environment, one that would probably be overseen by US-backed OAS “representatives”.

The “opposition” might also decline to participate in the vote if President Morales runs for re-election, arguing that the Supreme Electoral Court carried out an “illegal” and “corrupt” act by reversing the results of the 2016 referendum where his initiative to run for a fourth term was narrowly defeated.

In other words, the “opposition” might move forward with their plans to “purge” the country’s “deep state” (military, intelligence, diplomatic, and administrative bureaucracies) of what they’d portray as “Morales’ loyalists” as a prerequisite to their participation in the next elections, and they could conceivably receive either the OAS’ or a US-backed regional “coalition of the willing’s” support in this respect (possibly expressed through the threat of sanctions if President Morales doesn’t submit). Their campaign of Hybrid War pressure would continue unabated in this scenario since they’d know that they can rely on different dimensions of support from their external patrons. Not to be forgotten, another key variable is the reaction of President Morales’ mostly indigenous supporters to all of this, since they’re the ones who stand to lose the most if the “opposition” seizes power (whether by “democratic” means, a military coup, or through a Color Revolution) and rolls back the hard-earned socio-political rights that they obtained during the incumbent’s 14-year-long tenure.

There are way too many identity conflict variables — in the political, ethnic, and regional domains — at play to assume that the Hybrid War on Bolivia will resolve itself “peacefully” in any realistic scenario. The “best-case” one would be that the “opposition” desists its destabilization campaign and allows another election to be held without first demanding a “deep state” purge. President Morales might once again win in the first round, though, possibly even with a larger majority than before, but that outcome would almost certainly be alleged to be “fraudulent” once more by his opponents no matter how transparent the electoral process is at that point. It goes without saying that the destabilization cycle would commence once more in that scenario. The second relevant one is that the vote goes to a second round, but again, the “opposition” probably won’t concede defeat if President Morales comes out on top, so recent events would simply repeat themselves until the forces behind them get what they want.

Looking forward, the Hybrid War on Bolivia is still far from over despite President Morales backtracking in practice on his principled pro-sovereignty rhetoric. He appears to recognize just how dangerous the dilemma that he’s been forced into is ever since the military tacitly took the side of the “protesters” and several of his police forces across the nation mutinied against him over the weekend. He also knows that any further escalation of the regime change campaign against him will probably cause a civil war to break out between his supporters and the “opposition”, so he’s doing his best as a responsible head of state to avert that disastrous scenario to the best of his ability, even if it might ultimately be in vain. The dynamics are against him and he’s been forced onto the defensive, with it appearing extremely unlikely that he’ll be able to reverse this trend, especially not without the military’s support. It looks like President Morales is hoping that the “best-case” scenario of the several that were analyzed in this piece will transpire, but he’d be wise to also simultaneously prepare for the worst-case ones that seem much more probable at the moment.