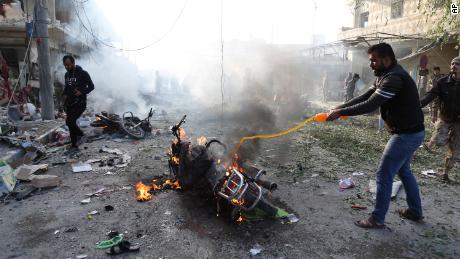 Monday afternoon, 7 civilians were killed and 70 others were injured when three car bombs exploded in the populated city of Qamishli in Hasakah countryside in northeastern Syria.

The second explosion coincided with the explosion of a third car bomb next to the restaurant “Abu Dalil” in “Al-Wehdah” street, during the peak period when the restaurant was full of people who want to eat lunch.

The three explosions caused the death of 7 civilians, while about 70 people were injured, most of them seriously. The injured were taken to the city hospitals in for treatment.

According to local sources, the three explosions caused significant material damages and a wide range of destruction to nearby houses and shops.

The areas controlled by SDF in northeastern Syria are witnessing a state of security instability as a result of the ongoing bombings and assassinations happening there, with inability of SDF members to seize ISIS sleeper cells deployed in the northeastern areas of Syria.