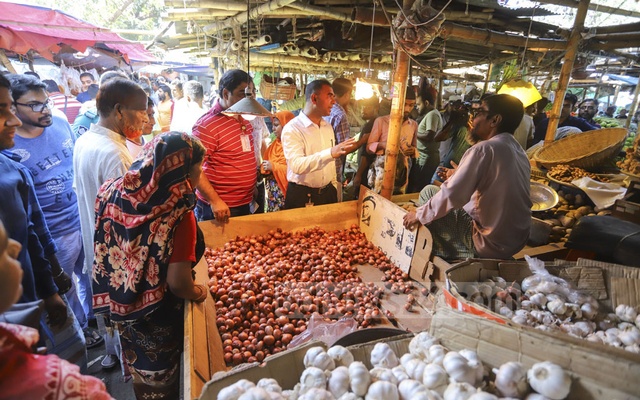 Egypt to reduce subsidized staple food prices from next month

Egypt is to reduce the prices of subsidized food staples from next month, the supply ministry spokesman said Saturday as the country’s economy shows signs of recovery.

“Prices of cooking oil, sugar, rice and flour will be reduced starting the first of December,” said supply ministry spokesperson, Ahmed Kamal. He stressed that the measures aimed to make goods available “in suitable quantities and prices.”
Last month, the government reinstated 1.8 million Egyptians to a food subsidy program, as instructed by President Abdel Fatah al-Sisi.
Also in October, fuel prices were cut by 25 piastres (0.015 US cents) a liter following several rounds of price hikes under a tough austerity program that triggered popular discontent.
The measures came into play after rare, small-scale, protests in September calling for al-Sisi’s removal after an exiled Egyptian businessman accused the president, and top military brass, of corruption.
Harsh austerity measures introduced by al-Sisi’s government since he took office in 2014 have hit poor and middle-class Egyptians.

Nearly one in three Egyptians lives below the poverty line, according to official figures released in July.
The tough reforms, including subsidy cuts and a devaluation of the local currency, were tied to a three-year $12-billion bailout loan from the International Monetary Fund secured in 2016.
The IMF loan was disbursed in full earlier this year, in a boost for the economy.
Egypt’s economy was sent into a downward spiral by the 2011 uprising, which toppled longtime autocrat Hosni Mubarak, and has also been hit by extremist attacks that damaged its vital tourism sector.
But the official statistics agency said inflation fell to its lowest level in nearly a decade last month, easing to 2.4 percent compared with 17.5 percent a year earlier.