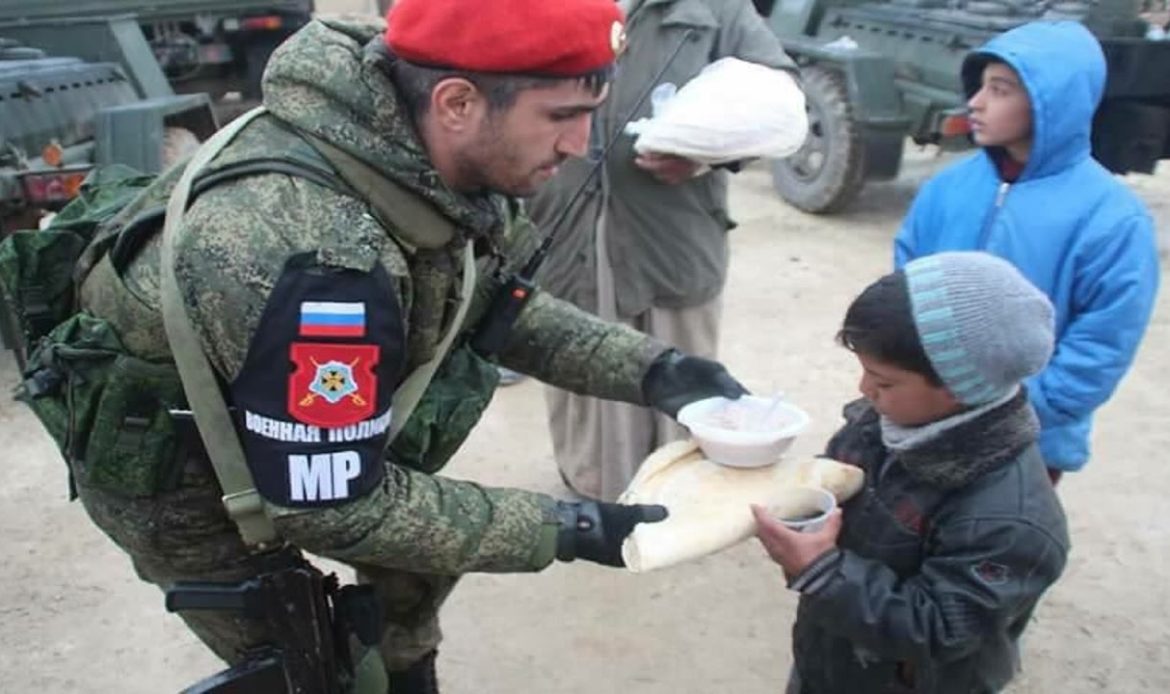 Turkey and Russia began joint patrols in the northeast conflict zone in Syria beginning November 1.  The Russian military police, formed in 2012, is tasked with convoy protection, area security, restoring law and order, and resettlement operations. Russia recently sent about 300 more military police and more than 20 armored vehicles to Syria. Russia landed attack helicopters and troops at a sprawling air base at Qamisli in northeast Syria, recently vacated by US forces.

Armed Russian military police flew into the Syrian airbase in northern Aleppo province near the border with Turkey and fanned out to secure the area.  The facility is used as a distribution center for humanitarian aid for local residents. “We entered the base and took the inner and external perimeter under control,” said a senior Russian military police inspector. “Now sappers are looking and going through every building to make sure there aren’t some kind of explosive substances left behind or some kind of surprises here for us,” he said.

Russia has two permanent military bases in Syria, an airbase in Latakia province, and the decades’ old naval facility at Tartus. On October 24, a column of Russian military police patrolled the Syrian-Turkish border. The patrol route was from the city of Qamishli to the settlement of Abouda. The Russian military police, from the southern Russian region of Chechnya, also helped to remove some of the Kurdish militias and their weapons 30 km away from the Syrian-Turkish border.

Under the terms of the deal, Russian and Turkish forces will start to patrol a narrower, 10-km strip of land on the Syrian side of the border where US troops had been deployed for years alongside their former Kurdish allies.  The arrival of the Russian police marks a shift in the regional balance of power just weeks after Trump began pulling US forces out of northeast Syria. Major General Yuri Borenkov, head of the Russian Defence Ministry’s Reconciliation Centre in Syria, said the Russian military police will continue to patrol communities in the northeast of Syria.

The deal between Russia and Turkey

Russia has emerged as a major power who maintains loyalty to its allies, and who has served as an honest broker between opposite sides in a conflict.  On October 22, Russian President Vladimir Putin and Turkish President Recep Tayyip Erdogan signed a deal concerning northeast Syria. According to the deal, Russian military police and Syrian border guards started to monitor the withdrawal of Kurdish military formations to the depth of 30 km from the border.

On Oct. 9, Turkey launched Operation Peace Spring, in which Erdogan will clear the border zone of the northeast of Syria of Kurdish militias, such as SDF, YPG/PKK, which Turkey views as terrorists.   Previously, Ankara halted its assault under a US-brokered ceasefire, and the Putin-Erdogan deal built on that agreement, while highlighting a growing security relationship between Russia, an ally of Syrian President Bashar al-Assad, and NATO member Turkey.

The role of the Syrian Arab Army

On October 13, SANA reported that Damascus had struck a deal with Kurds and sent troops to northern Syria to protect civilians from the Turkish army. In the next few days, the Syrian army took control over some cities and towns in Kurdish regions without any fighting, including Al-Tabqah, Manbij, Raqqa, and Kobani. On October 17, Syrian army units reached the Turkish border.

The Syrian Arab Army and Russian forces have entered two border cities, Manbij and Kobani, which lie within Turkey’s planned ‘safe-zone’ but are west of recent Turkish military invasion. The Syrian Arab Army’s frontlines are several kilometers from Qirat village on the Sajur River. Once the US forces left the northeast region, the Syrian Arab Army dispersed in all directions, taking up positions across a very large region.

“When it comes to Russia’s own interests, they lay first and foremost in preventing many trained and prepared militants with combat experience from infiltrating Russian territory. In this sense, we cannot say that we resolved 100% of tasks, but in general we did. We have fulfilled the task that we had set for ourselves in Syria,” Putin said on November 14 from Brazil.  Putin stressed that after Russia started supporting the legitimate government in Damascus, 90% of the country’s territory was liberated from terrorists. “Not only liberated, but also returned under the control of the legitimate government. We have achieved what we had set out to do,” he noted.

The Russian leader has called on other countries to join efforts in the fight against terrorism. “There is a threat of infiltration for all countries, a threat that militants will leave Syria and go to other places,” Putin said. “Everyone is in danger, that’s why we need to join efforts. I hope we will work together in a constructive manner,” he added.

The Noble Peace prize of 1988 was awarded to the UN peacekeepers, who had served as observers and soldiers from 1948 to 1988, including over 500,000 persons, of which 733 had died.  Their task wasto report on the situation in crisis areas, set up buffer zones, keep up contacts between conflicting parties, monitor armistice agreements, maintain calm and good order, and give humanitarian aid.

The Russian military police in Syria are doing a similar job, which began in late 2016 in East Aleppo when a battalion was deployed and their mission was not to engage in frontline fighting, but rather to restore law and order and win the trust and confidence of a civilian population.  The Russian military police performed well and soon had earned a reputation of being fair administrators in the many cease-fire agreements brokered through the political process.  They have policed buffer zones between warring sides, escorted convoys of terrorists and their families to a safe-zone, guarded humanitarian corridors for civilians to flee a conflict area, providing temporary shelter, food and medical care to civilians fleeing to safety, and they provided security for OPCW inspectors.

The Russian military police are deserving of recognition as humanitarian peacekeepers, and were part of a multifaceted effort by Russian leaders and diplomats, as they sought to end a conflict that could have engulfed not only the entire Middle East but the world.