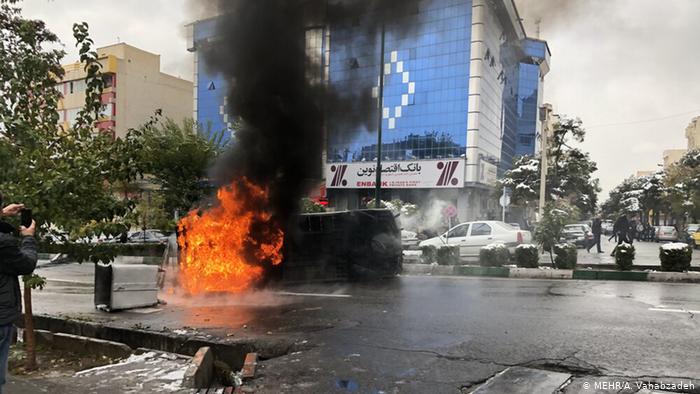 Washington’s Fingerprints All Over Iranian Protests

US Secretary of State Mike Pompeo has once again made remarks in support of riots in Iran, interfering in the country’s domestic affairs in support of, not people’s right of protest, but riots by saboteurs.

Turning a blind eye to the escalating radical violent crimes in a number of cities that seriously trample the rule of law, Pompeo retweeted on Saturday a previous message sent to the Iranian people in July 2018, reminding them, “The United States is with you”.

After the Iranian government announced it is raising fuel prices early on November 15, many people across Iran began pouring into streets in spontaneous protests, which continued the following day. Till Friday evening, protests were not confronted by the police.

But arson and sabotage attacks suddenly started, including armed attacks on police stations and military bases, prompting the law enforcement to take action in order to stop the saboteurs who have raided dozens of banks and gas stations among others.

In a number of cities, rioters have been launching attacks by beating, smashing, looting and setting fires. They attack police officers and civilians, besiege and intercept the central authorities’ agencies in small towns, deface the national emblem and insult the national flag, and even commit arson.

A series of such acts are far beyond the scope of peaceful protests and “free speech” claimed by Pompeo. No country under the rule of law will tolerate such acts, with France being the latest example. The Iranian government brings violent protesters to justice in accordance with the law, which exactly demonstrates that the country safeguards the rule of law.

Silent on the violent crimes, the US blamed Iranian law enforcement’s actions which exercise restraint, saying it hoped that the fuel hike issue could be resolved in a way that is nonviolent. Why were there no politicians from Western countries calling for “nonviolent” solutions when the US and European countries were involved in violent conflicts with protesters including the “Occupy Wall Street” movement in the US, the “Yellow Vest” movement in France and the riots in London? When it comes to Iran, politicians such as Pompeo have “suddenly” changed their attitudes. This is a clear double standard.

Some Western media have also changed their tune by reporting the violent crimes in Iran using words like “ugly.” In fact, trained rioters are demonizing the police and the government with rumors and instigating hatred towards the police through US and UK-based opposition media and some social media platforms. Pompeo’s remarks exactly prove what he has done as the director of the Central Intelligence Agency, as he said: “We lie, we cheat, we steal.”