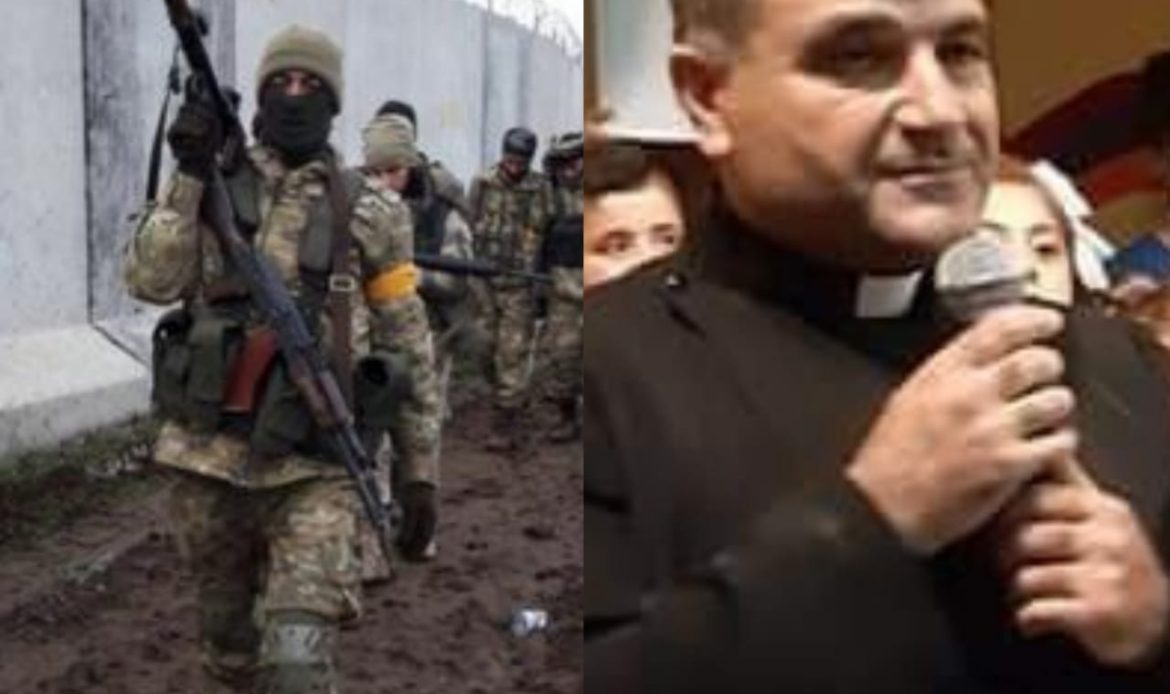 Note: this is part 2 of a 2 part investigation of the FSA, Turkey and their connection to the murder of a Syrian Priest and his father.

In part 1 of this investigation, we learned about Father Hovsep Bedoyan, the head of the Armenian Catholic community in Qamishli, and the priest’s father, Abraham Bedoyan, who was killed November 11, on the road leading from Qamishli to Deir Ez Zor, were they were headed to check on the rebuilding of the Forty Martyr’s Armenian Apostolic Church in Deir Ezzor, which was destroyed in 2014 by terrorists who targeted Christians and churches.  Those terrorists were the Free Syrian Army (FSA) and they are the same group that executed the priest and his father.  The FSA is now employed by Turkey as mercenaries and is the invasion ground forces used in the current Turkish invasion of northeast Syria.

On August 17, 2013, in Marmarita,  Amin Nakour, Maya Barshini, Atalla Aboud, and Ibrahim Saadi were attending a Christian celebration to honor the annual commemoration of “Mother Mary’s Day”.  The small village of Marmarita sits in the historic “Valley of the Christians” which is near Homs.  It was a hot August night, and Christian party-goers were suddenly attacked the FSA and their allies.  The four were killed when they attempted to flee the party in a car.  The FSA and their allies, have vowed to make Syria a Sunni Muslim State, and have targeted Christians and minorities for 8 years.

The invasion, occupation, and destruction of Kessab

On March 21, 2014, Kessab was attacked when shelling from the Turkish side of the border rained down on the undefended Armenian village, sending its 2,000 residents into panic.  Over 20,000 fanatics from the FSA and its allies came pouring over the border.  They desecrated all 3 churches, and looted the village’s graves, before scattering the bones of the deceased around the town. The FSA held 26 elderly Armenians against their will for forty days in Turkey, where the FSA kidnappers brought the US Ambassador to Turkey, Francis J. Riccardone, Jr., to visit the elderly captives, but offered no help or release.  Samuel Poladian, who stayed in Kessab for the 3-month occupation, and claims he heard Turkish military helicopters overhead on the morning of the invasion, and that Turkey assisted in the invasion.

Monseigneur Ayvazian said, ”They burned all my books and documents, many of them very old, and left my library with nothing but 60cm of ash on the floor.” He has a photo of the church altar, which was desecrated by the FSA before the Syrian Arab Army liberated Kessab on June 15, 2014. The Armenians claim the Kessab attack, which was directed solely against Armenian Christians, was Turkey’s brutal way of showing the Armenians and the Syrian government that they can attack at any time.

On November 10, 2014, terrorists blew up the Armenian Church in Deir el-Zour, which is dedicated to the 1.5 million Armenians slaughtered by the Turks during the 1915 genocide, where many hundreds of thousands of victims died in death camps around Deir el-Zour.   Because the FSA has received arms from Turkey, the destruction of the church is regarded by Armenians as crimes carried out by Turks, harkening back to the genocide. “During the Armenian genocide, the Turks entered the church and killed its priest, Father Petrus Terzibashian, in front of the congregation,” Monseigneur Ayvazian said, adding “Then they threw his body into the Euphrates. This time when the Islamists came, our priest there fled for his life.”

The Turkish hatred of Armenians

The 19th century Armenian Surp Asdvadzadzin Church in Gurun district of Sivas (Sebastia), Turkey, will reopen as a museum.  At different times the church has been used as a prison, movie theater, storeroom, and wedding hall. The local mayor hopes it will boost the development of tourism in the region. That is the stark reality in Turkey, where Muslims account for 98% of the population, compared to the large Christian minority in Syria. In Turkey, they have tried to erase their Christian history, and have used the old Armenian churches as museums, or locked up and in ruins.

The Armenian Genocide, Turkish denial, the US House recognition

The Armenian Genocide was the systematic mass extermination and expulsion of 1.5 million ethnic Armenians within the Ottoman Empire, from approximately 1914 to 1923.  Other ethnic groups were similarly targeted for extermination; such as Assyrians and the Greeks, also strictly Christians. Mass executions were followed by the deportation of women, children, the elderly, and the infirm on death marches leading to Deir Ez Zor, which were driven forward by military escorts, as the deportees were deprived of food and water and subjected to periodic robbery, rape, and massacre.

On Oct. 29, 2019, the US House voted overwhelmingly to formally recognize the Armenian genocide and denounce it.  Lawmakers had previously failed from supporting such a resolution to preserve the United States’ relationship with Turkey, a NATO ally that has steadfastly denied that the atrocities amounted to genocide. Livid at Turkey’s recent bloody military invasion in Syria, lawmakers saw a possible tie to the Armenian genocide, as many feared the withdrawal of American forces would lead to ethnic cleansing in northeast Syria.