Home Politics US Is Again Complicit in an Illegal Coup, This Time in Bolivia 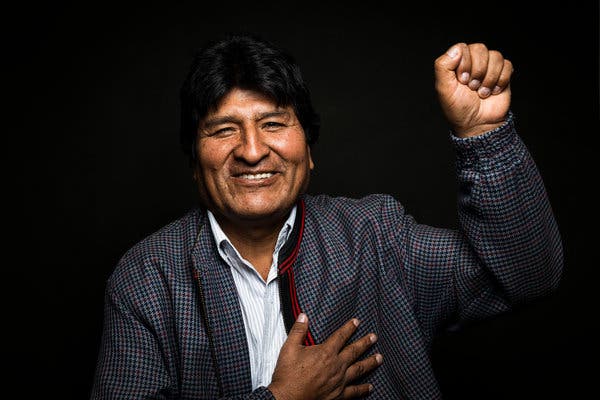 Once again, the United States is complicit in an illegal coup d’état in Latin America, this time in Bolivia. On November 10, a right-wing, anti-Indigenous group seized power after the Bolivian military’s removal of President Evo Morales, who had declared victory in the October 20 presidential election.

The United States’ fingerprints are all over the coup. Advisers from the U.S. Southern Command have been stationed on Bolivia’s border with Argentina, Ivanka Trump made a surprising visit to an Argentine province near the Bolivian border in September, the pro-U.S. Organization of American States (OAS) cast unfounded doubt on Morales’s election victory, and the U.S.’s National Endowment for Democracy provided suspicious grants to Bolivia.

At least 32 people have been killed and hundreds injured since the coup began. Sacha Llorenti, Bolivian ambassador to the United Nations, told Democracy Now!, “We are going through not just a coup d’état, but a violent one.” Indeed, it has resulted in “the rise of a far-right regime of terror,” professor Gabriel Hetland wrote in The Washington Post.

Morales — Bolivia’s first Indigenous leader in a country where 65 percent of the people are Indigenous — received 10 percent more votes than Carlos Mesa, the second-place candidate who has close ties to the U.S. government. Mesa was in regular communication with U.S. officials who were trying to destabilize Morales, U.S. government cables published by WikiLeaks reveal.

The day after the election, the U.S.-funded OAS sought to delegitimize the election results. “The OAS Mission expresses its deep concern and surprise at the drastic and hard-to-explain change in the trend of the preliminary results revealed after the closing of the polls,” it stated.

But the Center for Economic and Policy Research (CEPR) published a comprehensive statistical analysis on November 8 that found no evidence of fraud or irregularities in the election and determined that the results reflected highly similar patterns from past elections. Other research conducted by CELAG (Centro Estratégico Latinoamericano de Geopolítica) confirmed CEPR’s findings and identified insufficient evidence to support the assertions in the OAS statement.

CEPR co-director Mark Weisbrot noted in an op-ed for Market Watch, “The OAS isn’t all that independent at the moment, with the Trump administration actively promoting this military coup, and Washington having more right-wing allies in the OAS than they did just a few years ago.”

The OAS was established during the Cold War to prevent the proliferation of leftist governments. USAID considers OAS a critical tool in “promot[ing] US interests in the Western hemisphere by countering the influence of anti-US countries” such as Bolivia.

The November 10 military coup led to the forced resignation of Morales, who received asylum in Mexico. Right-wing politician Jeanine Añez declared herself interim president, and Donald Trump immediately recognized her illegitimate claim to the presidency. Añez then issued a decree immunizing the military from criminal liability “for carrying out necessary actions in their legitimate defense while performing their constitutional duties.” Morales supporters accused Añez of giving soldiers “carte blanche” to shoot demonstrators. Bolivia’s human rights ombudsman and reporters have documented widespread injuries and fatalities from gunshots.

U.S. Involvement in the Coup

During Morales’s nearly 14 years in office, his Movement Towards Socialism (MAS) party reduced poverty by 42 percent and extreme poverty by 60 percent. It cut unemployment by 50 percent and nearly tripled the per-capita G.D.P. “It’s indisputable that Bolivians are healthier, wealthier, better educated, living longer and more equal than at any time in this South American nation’s history,” Anthony Faiola wrote in The Washington Post.

There was discontent about Morales seeking a fourth term among some sectors in Bolivia, who thought there should be space for new leadership. But Morales had a strong record of establishing policies to help the people of Bolivia, which angered the U.S. government, Western corporations and the corporate media, “who function as ideological shock troops against leftist governments in Latin America,” Alan MacLeod wrote at Fairness and Accuracy in Reporting.

The U.S. and Argentine governments helped to engineer the Bolivian coup, Stella Calloni reported in Resumen: Latinoamerico. She cited the presence of advisers from the U.S. Southern Command on the Argentine border with Bolivia.

Calloni also documented “the surprising trip of Ivanka Trump” to the Argentine province of Jujuy near the Bolivian border on September 4-5. Accompanied by 2,500 U.S. agents and Undersecretary of State John Sullivan, Ivanka Trump was ostensibly there to “visit” a small NGO dedicated to furthering women’s rights, and she delivered an “aid” package of $400 million for “road works.” Alicia Canqui Condori, national representative of MAS, said that, “in Jujuy Donald Trump’s daughter had met with Gov. Gerardo Morales to plan what happened in Bolivia.”

Moreover, according to Calloni, Bolivian Gen. Williams Kaliman, who “suggested” that Morales resign after the election, traveled to the United States 72 hours after the coup began and he received $1 million from the U.S. embassy in Bolivia. Like many Latin American strongmen over the years, at least six of the top military leaders involved in the coup, including Kaliman, were trained at the notorious U.S. Army School of the Americas (now called the Western Hemisphere Institute for Security Cooperation) in Fort Benning, Georgia.

Months before the coup, Bolivia concluded a $2.3 billion deal with a Chinese consortium to mine lithium. Bolivia has 70 percent of the world’s supply of lithium, which is used in car batteries, electronic devices and weapons systems. “The idea that there might be a new social compact for the lithium was unacceptable to the main transnational mining companies,” Vijay Prashad wrote. U.S. and Canadian companies sought to make a lithium agreement with Bolivia but they could not meet Morales’s conditions. “Morales himself was a direct impediment to the takeover of the lithium fields by the non-Chinese transnational firms,” according to Prashad. “He had to go.”

U.S. complicity in the Bolivian coup follows in a sordid tradition of meddling in the political and economic affairs of Latin American countries. “For many years, the US government has provided overt financial support to opposition political parties and civic groups, including to many of the groups that have been engaged in violent insurrections and coup plotting since at least 2008,” Thomas Field wrote in Jacobin.

One key vehicle that the U.S. government uses as a cover for its imperialist policies is the National Endowment for Democracy (NED). After disturbing revelations of covert CIA operations in the second half of the 1970s, NED was established under Ronald Reagan. “The idea was that the NED would do somewhat overtly what the CIA had been doing covertly for decades, and thus, hopefully, eliminate the stigma associated with CIA covert activities,” William Blum wrote in 2005. NED co-founder Allen Weinstein concurred, stating in 1991, “A lot of what we do today was done covertly 25 years ago by the CIA.” Although ostensibly a private, nonprofit organization, NED is largely funded by the United States. “In effect,” Blum noted, “the CIA has been laundering money through NED.”

Peter Haberfeld, a retired lawyer and labor organizer who has studied the “Pink Tide” governments in Latin America, documented NED grants in Bolivia. He told Truthout that “between 2016 and 2019, NED gave grants to over 30 organizations for ‘democracy promotion’ in Bolivia. The grants total $3,209,887.”

Haberfeld said the grants were officially earmarked for “lofty objectives such as expanding participation by women, youth, media and entrepreneurs in a vibrant political process, particularly in connection with elections,” but cautioned “it is wise to be suspicious.” Haberfeld cited author Neil A. Burron, who wrote in The New Democracy Wars: The Politics of North American Democracy Promotion in the Americas, that “democracy promotion is typically formulated to advance commercial, geopolitical and security objectives that conflict with a genuine commitment to democracy development.” Burron noted, “For the US, the political manipulation of democracy promotion in support of a North American-led regional order is a continuation of long-standing forms of intervention [that have been] used as a license to meddle in the domestic affairs of others.”

NED was complicit in the Iran-Contra affair in the 1980s, manipulated the 1990 Nicaraguan elections, heavily funded the 2002 failed coup attempt against socialist President Hugo Chavez in Venezuela, and supported the opposition to progressive President Jean-Bertrand Aristide in Haiti in the 1990s. Between 1990 and 1992, NED donated a quarter-million dollars to the Cuban-American National Foundation, the violent anti-Castro group based in Miami.

In 2018, under the guise of “democracy,” “human rights” and “entrepreneurship,” NED funneled more than $23 million to opposition groups in Latin American countries, including Venezuela, Nicaragua, Cuba and Bolivia.

Trump not only took aim at the progress Barack Obama had made toward normalization of relations with Cuba, he has escalated the U.S. economic war on Cuba and unleashed untold numbers of lawsuits that threaten to destroy the fragile Cuban economy.

The Obama administration, led by former Secretary of State Hillary Clinton, supported the 2009 coup in Honduras. The fraudulent election following the coup was financed by NED and the State Department, ushering in a repressive and militarized regime. Conditions deteriorated, leading to the exodus of thousands of Honduran children fleeing north.

U.S. Complicity in the Coup in Bolivia Is Illegal

U.S. complicity in the coup in Bolivia is illegal under both U.S. and international law. The United Nations Charter prohibits the use of or threat to use force against the territorial integrity or political independence of another nation. The International Covenant on Civil and Political Rights guarantees the right to self-determination.

The Charter of the Organization of American States, to which the U.S. is a party, forbids any country from intervening in the internal or external affairs of another country. The OAS charter declares that, “Every State has the right to choose, without external interference, its political, economic, and social system and to organize itself in the way best suited to it, and has the duty to abstain from intervening in the affairs of another State.”

The Foreign Assistance Act forbids the United States from assisting a country “whose duly elected head of government is deposed by military coup or decree.”

There has been global condemnation of the coup. Sixty-four organizations of jurists, lawyers, NGOs, social movements and trade unions from around the world, including the International Association of Democratic Lawyers and the National Lawyers Guild, sent a letter to the UN High Commissioner for Human Rights Michelle Bachelet, urging her to strongly condemn the human rights violations resulting from the coup.

Fourteen members of the House of Representatives sent a letter to Secretary of State Mike Pompeo saying they were “deeply concerned” about the contribution of the Trump administration to the “escalating political and human rights crisis” in Bolivia.

Over 800 scholars, activists and public figures published an open letter demanding that the United States and the international community halt all support to the right-wing, anti-Indigenous regime that took power after the military coup.

Veterans For Peace condemned the racist coup in Bolivia and demanded an end to U.S. intervention in Latin America:

Veterans For Peace stands in solidarity with the Indigenous majority in Bolivia who are resisting the racist, right-wing takeover of their democracy. We demand that the coup be stopped and democracy restored in Bolivia. As military veterans who have been used and abused in too many unjust wars, we demand an end to 200 years of U.S. intervention in Latin America.

The situation in Bolivia is volatile and there is danger it could devolve into civil war. This is the time to urge senators and Congress members to end all U.S. support for the illegitimate regime, demand free and fair elections with all political parties represented, and insist that fundamental human rights of all Bolivians are protected.