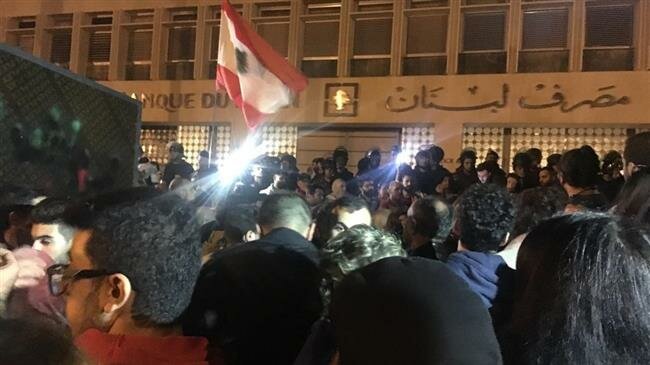 Dozens of Lebanese protest against monetary policies amid economic crisis

Dozens of people have staged a demonstration in Lebanon to express their resentment over the acute economic crisis in the country, as nationwide anti-government demonstrations demanding departure of the ruling elite enters its seventh week.

The protesters converged outside the building of the central bank, officially known as Banque du Liban, in Hamra neighborhood of the capital Beirut on Thursday evening, accusing the bank and all financial institutions of being partly behind the economic crisis that Lebanon, one of the most heavily indebted states in the world, is grappling with.

Protesters chanted slogans against Central Bank Governor Riad Salameh, blaming him in part for the devaluation of the country’s national currency.

They also asked the central bank to remove the government’s public debt, saying that banks are making huge profits from the interests paid by the government on its debt.

The development came a day after demonstrators staged a sit-in outside Banque Du Liban building, and a group of young protesters spent the night inside tents set up outside the bank.

Also on Thursday, Lebanon paid off a Eurobond of $1.5 billion that was due to mature.

Two officials with knowledge of the matter said on condition of anonymity that the next bond payment is scheduled for March, when a $1.2 billion Eurobond comes due.

Aoun Beirut Hariri Hezbollah Lebanese_Army Lebanon Nasrallah
Previous ArticleREPORT: Chinese Long-Range Anti-Ship Missiles Outclass US Navy Radars
Next Article It Was the Day of Thanksgiving and All Trump Talked About Was the Taliban