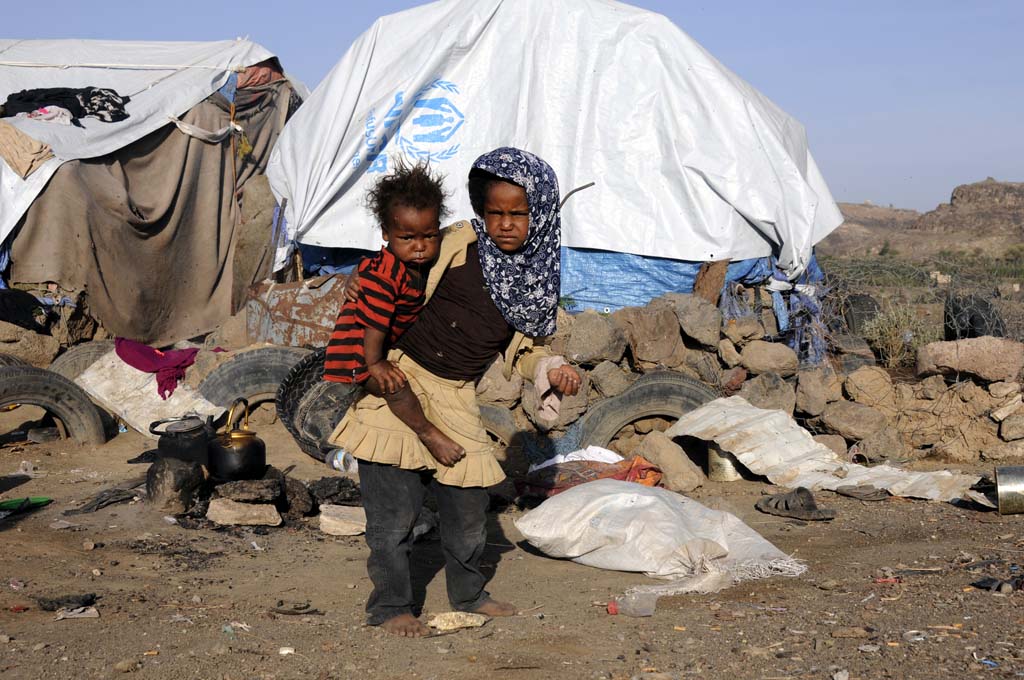 Rahaf Ali Bedaish, 8, carries her little brother Ahmed, 2, outside their tent at the Dharawan settlement. They have been displaced from Taizz governorate since the beginning of the conflict and miss their home. ; UNHCR is responding to the humanitarian crisis in Yemen, providing emergency assistance to those forcibly displaced by the conflict. Recent fighting in Yemen has made years of poverty and insecurity even worse. The conflict has killed 10,000 people and disrupted millions of lives, with 2 million internally displaced and a further 1 million having returned home to dangerous conditions. More than 20 million Yemenis need humanitarian assistance. UNHCR provides emergency shelter and household assistance including mattresses, blankets, sleeping mats, kitchen sets, buckets and other essential items. Our assistance has reached people in all 20 governorates affected by the conflict. We also refurbish public buildings that now host displaced families. We provide legal and financial assistance as well as psycho-social support, and we continue to protect and support some 280,000 refugees, mainly from the Horn of Africa, who remain in Yemen despite the conflict.

An international relief group has said another five years of fighting in Yemen will cost as much as $29 billion just to sustain the current level of humanitarian aid – more than the entire annual global humanitarian budget.

The International Rescue Committee said in a report on Monday that with the current rate of aid, it will take 20 years to return Yemen to pre-conflict levels of child hunger.

The IRC says Yemen has the world’s worst humanitarian crisis with 24 million Yemenis, or 80 percent of the population, needing humanitarian aid and 16 million living on the verge of famine.

A Saudi-led coalition allied with the internationally recognized government has been fighting the Houthi rebels in the country since 2015.