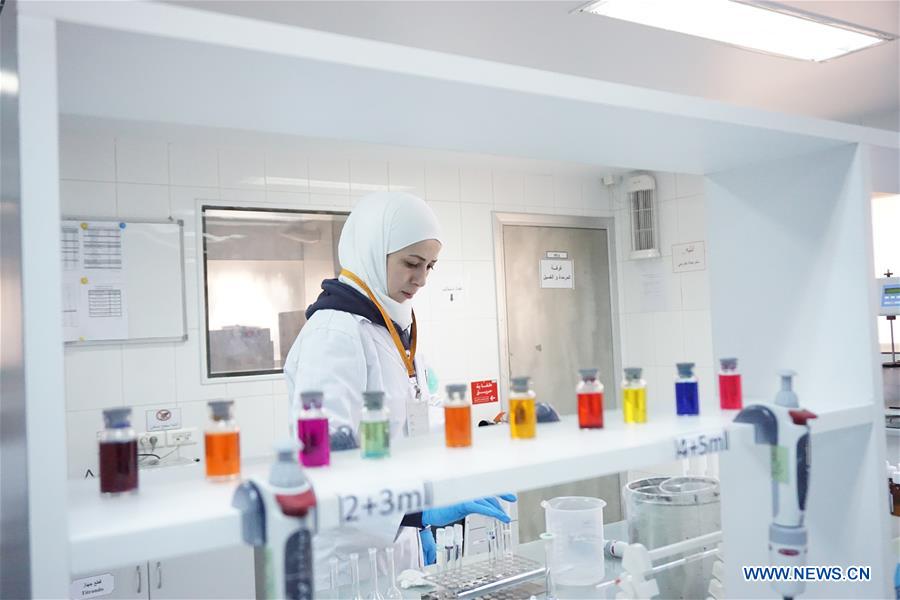 The first factory of its kind in Syria and the Arab world opened November 21, 2019, in Damascus.  Central Pharmaceutical Industries Company, ‘Mainpharma’, celebrated the opening of its factory for the manufacturing of anticancer drugs at Adra Industrial City, in the Damascus countryside.  Syrian Health Minister, Dr. Nizar Yazigi, said that the number of authorized pharmaceutical laboratories has reached 96 laboratories, which cover over 90 percent of domestic needs.  20 additional factories for pharmaceutical manufacturing are in the pipeline for Adra Industrial City.  Adnan Jaafu, chief executive of the company, said the factory will produce 70 percent of the entire spectrum of chemotherapy drugs, which will cover the domestic needs, and the excess will be exported. Syria imports all medicine for the treatment of tumors and vaccines from abroad.  The losses of the pharmaceutical industry due to war are 152 billion Syrian lira.  Over 100 factories are awaiting the Ministry of Health (MOH) approval. Russia, China, Cuba, India, and Iran have contracted to sell the raw materials to Syria for medicine production.

“The MOH gives free medicines to 1,864 health centers, and 150 hospitals around Syria.” said Dr. Yazgi to ‘RT Arabic’ on November 16, 2019.  The state-run hospitals are treating patients free of charge; however, the challenges facing the pharmaceutical industry include the increase in the production costs, because of the fallen currency rate.

The conflict in Syria, which began in 2011, gradually affected the 3 areas with the highest concentration of pharmaceutical factories: Aleppo, Damascus, and Homs, which caused a severe shortage of medicines in Syria.  The US-NATO backed terrorists concentrated on destroying infrastructure, and businesses.  The terrorists made life unbearable for civilians, as the factories closed down because of attacks, and the employees lost their jobs and income, which in turn led to the mass migration of Syrian refugees, most of whom were economic migrants, having lost their income because of the terrorists.  As the factories stopped production, medicines were no longer available, and yet importing medicines were prevented by the US-EU sanctions.  5,000 pharmacies and 24 pharmaceutical factories stopped service during the war, and in Aleppo, the industry was almost wiped out.

Terrorists looting for the Turkish government

Fares Al-Shihabi, Member of Parliament, and President of the Aleppo Chamber of Industry said in August 2012, about 20 medicine factories in Aleppo, and many other factories were exposed to theft, looting, and kidnapping, noting that the production constitutes more than 50 percent of Syria’s production of pharmaceuticals. Shihabi said that two of the owners of these facilities were kidnapped, and many of the industrialists began to close their businesses and leave the country.  The spokesman for the United Nations in Geneva, Tariq Jassar Fitch, said that “a large number of factories closed, which led to a severe shortage of medicines,” adding that the country is in an urgent need of medicine for tuberculosis, hepatitis, high blood pressure, diabetes, cancer, and kidney disease.  Iran provided Syria with quantities of drugs worth 1.2 million US dollars for the treatment of chronic diseases.

In January 2013, Shihabi stressed that the Aleppo Chamber of Industry had decisive evidence on the involvement of the Turkish government in stealing production lines and machines from hundreds of factories in Aleppo city and smuggling them into Turkey, against international laws. Syria formally accused Turkey of looting factories in the industrial city of Aleppo and sent letters to UN chief Ban Ki-moon and the UN Security Council. “Some 1,000 factories in the city of Aleppo have been plundered, and their stolen goods transferred to Turkey with the full knowledge and facilitation of the Turkish government,” the Syrian Foreign Ministry said in the letters.

By 2014, Aleppo industrialists said, more than 300 factories were plundered and their equipment sold in Turkey, and they may take Turkey to The Hague, to settle their accounts at the International Court of Justice.  “The basic reason for the fall of Aleppo and Idlib to armed groups is the terrorists sent from Turkey and the support Turkey gives to them.” said a senior Syrian commander.  The Syrian Arab Army (SAA) took back Sheikh Najjar, in Aleppo,  in July 2014.  “They had occupied 80% of the factories.  It took us 48 hours to take back Sheikh Najjar. They destroyed most businesses by setting off their booby traps as they were fleeing.”, said the commander.

Hazim Accan, the director-general of the Sheikh Najjar Industrial City, said “There are 963 production facilities, mostly textiles, food, chemicals, medicines, aluminum, iron and plastics. Today 366 of them are operational. They were badly damaged. Electricity and water systems collapsed. Half of the non-operational facilities were dismantled and taken to Turkey.”

According to Habib Abboud, Syrian deputy health minister for pharmaceutical affairs, the sanctions US-EU imposed on Syria involved the pharmaceutical industry, by preventing exporting raw materials to Syria, even though medicines are purely humanitarian. “Despite the fact that this is medicine and it should be away from any sanctions, many countries have imposed sanctions and restrictions on Syria,” he said.

Syria has lost certain types of drugs, including those related to deadly and chronic diseases, such as: “Nitroglycerin” for minor strokes attack, “Daflon” for veins’ disorders, “Altroxan”, “Thiamasul” a medicine for the thyroid gland, asthma sprays, “Vlozon”, “Azmirol”, as well as cardiac patches “Netroderm”, and most of these have no alternative.

According to the Central Bureau of Statistics in Syria, in 2010 there were 70 plants producing pharmaceuticals, and only 2 were state-owned.   These provided more than 91% of the domestic needs: especially psychiatric, dermal, gynecological, ophthalmic medications and children’s syrup.   At that time, blood derivatives, cancer drugs, and vaccines were imported, yet the prices were affordable for all levels of society.  The pharmaceutical industry employed around 30,000 workers and Syria held 2nd place among Arab countries in covering its local needs, as well as held the 2nd place among Arab countries in the volume of exports of medicines.  The Syrian medicines ranked #1 in Yemen and Iraq, and had been exported to 57 countries in Asia, Africa, Eastern Europe, and had been used by UNICEF and the World Health Organization.

Today, the pharmaceutical industry in Syria is on the rebound, but hampered by the post-war economic crisis, US-EU sanctions which continue to prevent importing drugs or the raw materials to make drugs, and the devalued Syrian currency, which makes drug prices higher than many consumers can afford. ‘Diamond Pharma’ factory in the countryside of Damascus was able to re-open after the SAA fully liberated the Damascus countryside in May 2018. As of July 2019, Aleppo has managed to complete 1,216 projects of rehabilitation to infrastructure, and this has allowed more than 15,000 industrial facilities to re-open after years of closure.  565 facilities are now in production in Sheikh Najjar Industrial Zone.  Syrian businesses have fought back against the US-NATO attack for ‘regime change’, which has failed, but succeeded in destroying much of Syria and is responsible for hundreds of thousands of deaths, injuries, and displacements.