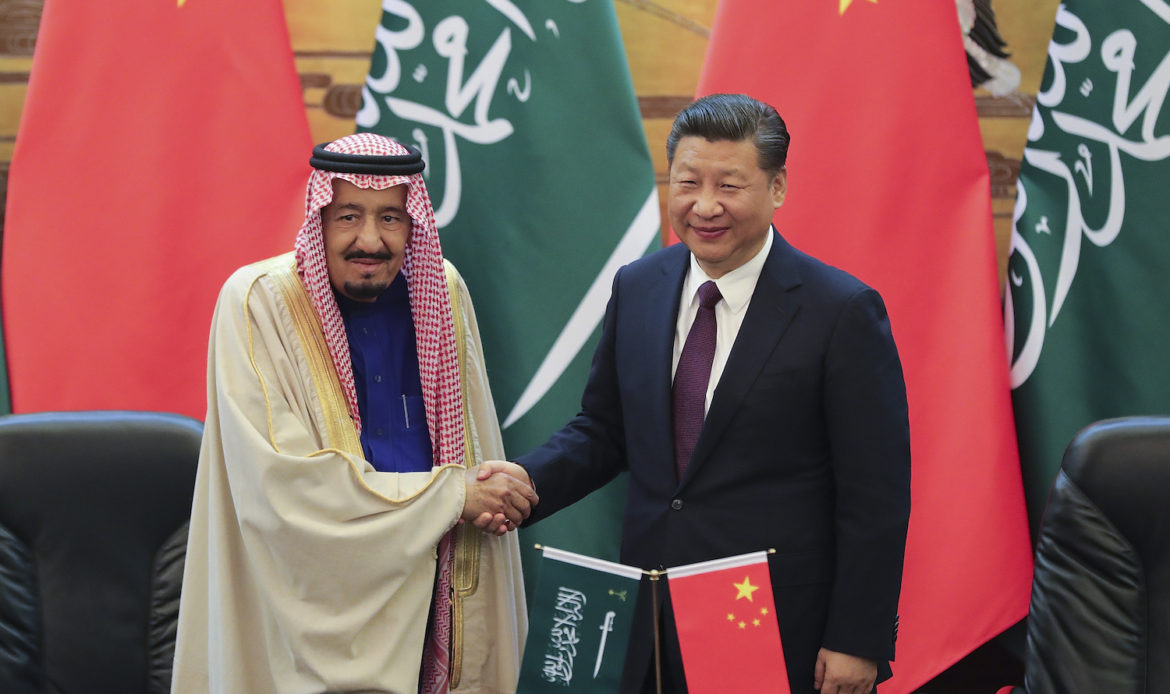 China, the world’s second-largest economy, appears to be in the process of carving out a new Middle East plan that will over time erode and chip away at American dominance in the region.

Granted, Washington’s influence in the Middle East has been steadily disappearing for some time. It became clear this was the case after the US toppled an anti-Iranian dictator, Saddam Hussein, in Iraq and replaced his government with a pro-Tehran Shia-dominated leadership. However, things really took a turn for the worse some years later in Syria, which saw Russia emerge as a major power whose physical presence could not only prevent a pending US invasion, but could potentially broker lasting peace deals.

It should be no surprise then to see China also willingly filling the void left by a slowly but surely deteriorating superpower. The Middle East Security Forum held in Beijing at the end of November brought together over 200 representatives from both the Middle East and China to discuss Beijing’s “new idea” for the Middle East.

According to the Diplomat, the majority of attendees at the summit “criticized the US unilateral and hegemonic policy in the Middle East” while pushing for an end to the “unjust regional order that has resulted from US intervention and pressure.”

I get the impression that this snippet paints a fairly accurate picture of what took place in October when about 1,000 US troops withdrawing from Syria crossed into Iraq without permission.

Despite all of the major criticisms of China and its expanding foreign policy across the Asia-Pacific, the Middle East and Africa, this has to be one of the main points of contention that separates China from the United States.

China doesn’t overtly bully Middle Eastern states into submission. It doesn’t sanction states unilaterally who don’t comply with a particular world order. In practical terms, it doesn’t try to pit one side (say, Saudi Arabia or Israel) against another side (say, Iran). Beijing, for its part, actively tries to work with all of its Middle East partners to achieve its vision of shared growth.

China hasn’t invaded or intervened in the Middle East without the consent of the host state. In fact, Beijing has approximately 1,800 soldiers stationed in the region as part of the UN peacekeeping process. This is less than the 2,000 or so US troops that illegally “invaded Syria,” as President Bashar Assad described it. The Gulf hosts some 45,000 to 65,000 US troops and in Afghanistan there are at least 12,000 to 13,000 US troops currently still fighting a war there that can never be won. Even as I type, the US is reportedly considering deploying another 14,000 troops to the Middle East in a bid to counter Iran.

Curiously enough, among the four points of common understanding between China and the attendees at the Middle East Security Forum was an idea to realise a final peace between Palestine and Israel in a just and equal manner. While Jared Kushner is doing a stellar and stand-up job of putting together a peace plan so far, I can’t imagine how the world will ever take the US seriously again if China is able to beat them to the punch and put the Israel-Palestine issue on the pathway to peace.

Sure, an unlikely scenario, given what would be at stake for Israel if it were to make major concessions to the Palestinians, so we will have to cross that bridge when we come to it.

So far, China has executed partnership agreements with at least 15 Middle Eastern states, including Saudi Arabia, an integral US ally. Beijing is also reportedly the UAE’s largest trading partner.

Could it be for these reasons that NATO chief Jens Stoltenberg announced last week that NATO would be singling out China and seeking to “tackle the issue” which a growing China poses? (Or is NATO just looking for something to do to justify its existence?)

Don’t get me wrong. Even if the American stranglehold of the region was to dwindle to the extent that the US military were effectively forced out, recent history has told us that the US always has a wild trump-card up its sleeve: the brute force of its military might. At the end of the day, even if China’s “new idea” saw less of a reliance on the US and a greater push to a more stable and cooperative Middle East region, the US is unlikely to go down without swinging a few punches (or missiles) along the way. And we also can’t forget Washington’s lucrative arms trade which will continue to provide a lifeline for years to come.

The irony of course is that the US is focusing less on the Middle East so that it can confront China in the Indo-Pacific region, dubbed by US Secretary of Defense Mark Esper as the new “priority theatre.” Then again, if the US begins diverting its attention back to the Middle East to take on Iran instead, China will be even freer to expand its operations in the South China Sea. Most likely in full awareness of this dynamic, China has committed to spending at least $250 billion in new investments in Iran to keep the Islamic Republic intact and afloat (which will only further rattle the US).

It’s partly because of China that promises the US will ever withdraw from Syria, Iraq and especially Afghanistan prove to be quite fanciful. The second it removes its physical presence from the region, other major players might see this as an invitation to move in by the fireplace and put their feet up.

Anywhere it goes, it seems the US is caught between China and a hard place wherever it seeks to maintain its influence across the globe.