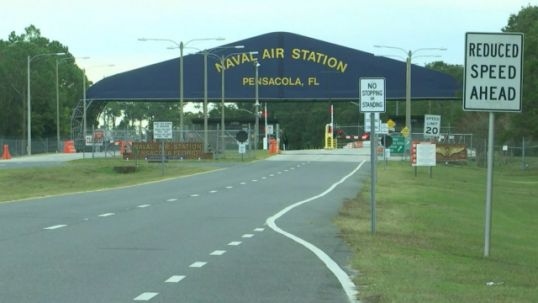 For the second time in two days, a deadly shooting has occurred at a US Navy base leaving at least four people dead and several others injured.

Four people including the suspected shooter were killed and seven others were injured on Friday at Naval Air Station Pensacola in Florida, said the Escambia County, Florida, Sheriff’s Office.

The suspected shooter was believed to be a Saudi national who was in the United States for training, two US defense officials said, speaking on condition of anonymity, according to the Reuters news agency.

The shooting was over and the shooter was killed but the base remained on lockdown, according to a Navy spokeswoman.

“Multiple injured personnel have been transported to local hospitals. We will continue to work closely with law enforcement agencies,” Lt. Cmdr. Megan Isaac said in a statement.

The injured people were being treated at Baptist Hospital, WEAR TV reported.

Sheriff David Morgan told reporters on Friday morning that a sheriff’s deputy fatally shot the shooter in a classroom on the base.

“Walking through the crime scene was like being on the set of a movie,” Morgan said. He declined to share any details about the suspected shooter’s identity.

Two of sheriff’s deputies were injured, but both were likely to survive, officials said at the news conference.

On Wednesday, a Navy sailor shot and killed two civilian employees and injured another at the historic military base at Pearl Harbor, Hawaii, before taking his own life. The shooter died from “an apparent self-inflicted gunshot wound”, the officials said.

The Pensacola base is a major training site for the Navy and home to its aerobatic flight demonstration squadron, the Blue Angels. Naval Air Station Pensacola employs more than 16,000 military and 7,400 civilian personnel, according to the base’s website.

Pensacola Mayor Grover Robinson said at the news conference that the base is “an incredibly important part of our community.”

“We’re a military town,” he said. “Our hearts and prayers are connected to all of those that serve us every day.”