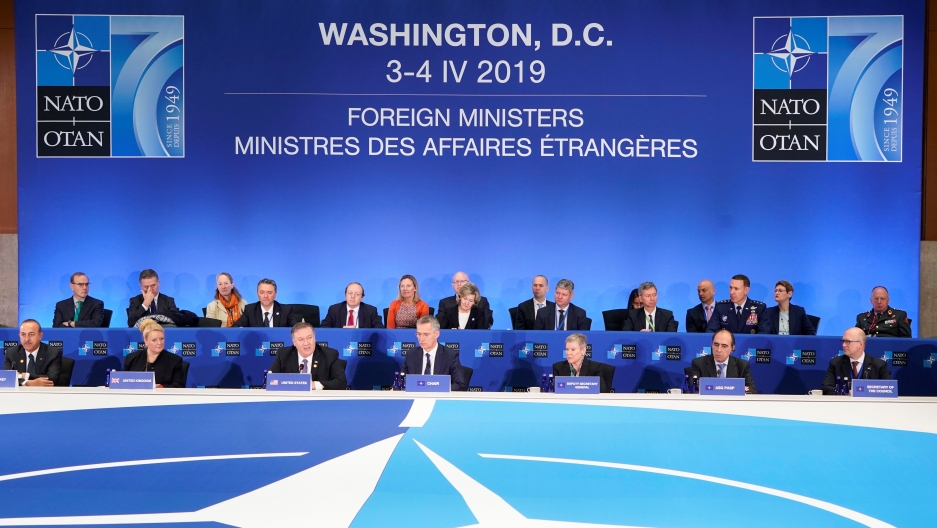 A recent article “NATO is Brain Dead” described the obsolescence Of NATO and NATO’s defense mechanisms against non-existence enemies. Amazing – with pretense of protection and security in Europe and the world, against Russia and China and fighting against “terror” – as the endless war against endless terror fought by the same forces which create the endless terror – is a very lucrative absurdity.

Now we learn from the French Peace Movement which was present at the 70th Birthday at Buckingham, London – that the horrors of NATO planned for the coming year – and if not stopped – they will be sowing destruction way beyond – are even more horrific than originally imagined. We also lean that Macron – who coined the by now legendary phrase “NATO is Brain Dead” is intimately part of the new NATO deal, Macron, again has launched a “nasty boy” propaganda, while in reality embracing NATO wholeheartedly.

Where is Charles De Gaulle when the world needs him!

Please read below – and spread this message to friends and foes – so as to divulge another lie of one of our European leaders – and be sure that there is NO truth that can ever be expected from the west.

Contrary to the media preparation cleverly orchestrated by President Macron, the NATO summit held in London on December 5 and 6, 2019 has not led to a questioning of this military alliance dating back to the Cold War. , on the contrary.

After celebrating 70 years of NATO at Buckingham Palace, the Heads of State and Government unanimously adopted a final declaration stating that “terrorism in all its forms and manifestations … remains a persistent threat to us all “and that” Russia’s aggressive actions pose a threat to Euro-Atlantic security “and for the first time showcasing China’s rise as a” challenge “for NATO. Thus we want to justify the revival of the arms race, a new enlargement of NATO in the Balkans with this year the accession of North Macedonia after the accession of Montenegro in 2018 and the implementation of NATO Readiness Initiative (NRI) announced by Jens Stoltenberg, NATO Secretary General. From 2020, NATO will be able to mobilize 25,000 soldiers, 300 fighter planes and 30 combat ships from the different armies of the partner countries in less than 30 days.

The London summit is therefore very much part of the aggressive and expansionist strategy of the United States, as analyzed by the international counter-summit organized in London on November 30 by pacifist forces from all over the planet – including the Peace Movement and the French collective “No à l’OTAN”. NATO no longer has “North Atlantic” as the name, because we are witnessing a dangerous globalization of NATO present on all continents through defense agreements with many countries.

The decisions taken in London reveal Emmanuel Macron’s statements on NATO’s “brain death” for what they are: a smokescreen aimed at putting France back as a champion of accelerated military integration. European Union, presented as an act of autonomy vis-à-vis NATO while it perfectly meets the objectives of NATO to finance more military spending by the European countries themselves while building capacity military facing Russia presented as a threat.

In 2020, Europe will be the setting for the Defender 2020 maneuvers, the biggest maneuvers since the end of the Cold War, when troops from the United States will deploy to Belgium, the Netherlands and Germany. to go to the borders of Russia, crossing Eastern Europe. These maneuvers will culminate in April-May 2020 and France will participate without questioning their provocation vis-à-vis Russia.

President Macron has undoubtedly succeeded in getting himself talked about before the summit and he has obtained that is indicated in the joint statement the opening of a group of “prospective reflection” on the strategy of the Atlantic Alliance; in fact, France will remain in NATO an unconditional ally of the strategies decided in Washington.

The pacifist counter-summit decided to intensify its actions in 2020 to denounce NATO as a factor of war and insecurity and to demand its dissolution, in favor of a security alternative that includes all the countries of the continent. European. The Defender 2020 maneuvers will be the occasion for the mobilization of public opinion against NATO, an instrument of war in the service of North American hegemony, in favor of a Europe of peace in a safer world.