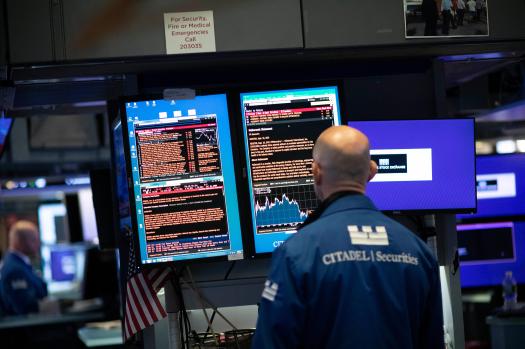 US stock indices fell the day after Washington’s assassination of a top Iranian general, precipitating an international crisis that could lead to a shooting war. However, the stocks of US defense contractors soared.

As the closing bell rang at the New York Stock Exchange on Friday, the Dow Jones registered a 233.92-point drop, while the S&P 500 fell by 23 points and the Nasdaq by 71.42 points.

Late Thursday night, the Pentagon confirmed it had assassinated Qassem Soleimani, the commander of the elite Quds Force unit of Iran’s Islamic Revolutionary Guard Corps (IRGC), in an airstrike at Baghdad airport. The same attack also killed several leaders of Iraq’s Popular Mobilization Units, the semi-official militias formed to fight Daesh who Washington has accused of being “proxies” of Iran.

“Geopolitical risks had really moved to the back burner. Last night was a wake-up call that they are a factor that we may need to contend with in 2020,” Chris Zaccarelli, chief investment officer at Independent Advisor Alliance, told the Wall Street Journal Friday.

Oil prices shot up by more than 4% Friday, with Brent Crude surging nearly $2.50 per barrel to $68.69 and West Texas Intermediate rose to $63.17 per barrel, amid fears of war in a region that produces much of the world’s crude oil.

A poor report by the Institute for Supply Management, which supplies US manufacturing data, also hurt stocks, Marketwatch noted. The index hit its lowest point since June 2009, when the country was wracked with the economic fallout of the Lehman Brothers-precipitated economic collapse.

However, the stocks of several major US defense contractors shot up on Friday, with Northrop Grumman posting a 5.50% gain, Raytheon a 1.74% gain, and Lockheed Martin a 3.69% gain.

US Defense Secretary Mark Esper announced Friday that between 3,000 and 3,500 additional US troops would be deployed to the Middle East and US troops in Iraq have been placed on alert. US civilians in Iraq have been alerted by the State Department to leave the country.