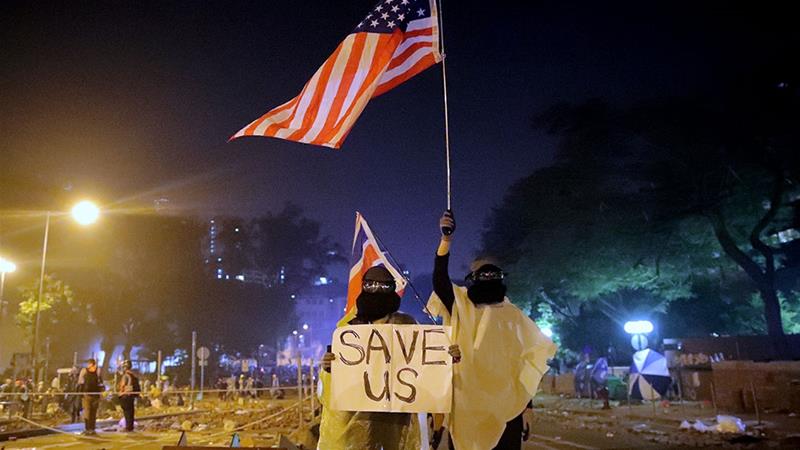 Hong Kong, India & hypocrisy: The two protests look similar, but only one is a lever in US’ power play

While protests in India and Hong Kong may look similar at first glance, Western reactions to them reveal fundamental differences. Dig deeper, and we hit the bedrock of hypocrisy about “human rights” and “democracy.”

There are superficial similarities between the protests that have rocked the Chinese autonomous territory of Hong Kong since May, and the protests around India for the past several weeks. Both ostensibly started due to a proposed law; extradition to the mainland in the case of Hong Kong, a citizenship amendment in the case of India. In both cases, protesters have set public property on fire, and used social media and technology to organize, with students as the driving force. There have also been casualties, among both the protesters and the police.

Another commonality is that the protests seem to be driven in part by misinformation. Hong Kong’s extradition proposal was quickly spun to mean an “end to democracy” in the autonomous city. In India, the Citizenship Amendment Bill (CAB) was likewise misinterpreted as affecting Indian Muslims and favoring Hindus above others, neither of which is true.

All of those parallels, while true, show the human tendency of seeing patterns everywhere – even when they don’t necessarily exist. After all, students tend to be the most disaffected members of society just about everywhere, and who doesn’t use technology to organize a protest these days? Nor is it surprising that Western media routinely misinterpret information about faraway places they know nothing about, filtering it through the prism of their own domestic prejudice.

There is also much that sets the demonstrations in Hong Kong and India apart. For one thing, nobody in India is carrying around US or UK flags, as some masked HK protesters have done. For another, the Hong Kong unrest continues unabated, even though the proposed law was withdrawn, suggesting that it was merely a pretext and not the cause. From the rhetoric of the protesters to the reaction of both the Western media and governments to the events in Hong Kong, it is difficult to escape the impression that we’re watching a “color revolution” at work.

In India, by contrast, the protests genuinely seem to be motivated by the citizenship and immigration laws – or rather, a misunderstanding thereof. That did not stop the issue from being quickly weaponized, both by Indian politicians and neighboring countries that have conflicts with New Delhi. However, and somewhat crucially, the one player who has so far refrained from getting involved is Washington.

Oh sure, the US Commission for International Religious Freedom (USCIRF) has condemned “religious violence” in India and called for PM Narendra Modi to “stop use of force on those exercising right to express concern” about the new laws – but the State Department has so far not followed the lead of its attack dog. In fact, by keeping Pakistan on the “naughty” list of countries concerning religious freedom, Foggy Bottom managed to get India and Pakistan to actually agree on something: condemning the US for meddling in their internal affairs.

Yet such meddling can’t hold a candle to the “Hong Kong Human Rights and Democracy” Act which the US Congress adopted – and President Donald Trump signed – at the beginning of December. If the Indian laws are truly as awful as the mainstream media says, don’t they warrant something similar?

Ah, but the US is currently pursuing a Cold War with China, concerned about Beijing’s growing political, economic and military power and its potential to endanger the perceived US hegemony over the world. Not only is India not seen as a threat of equal magnitude, but as a potential ally in that conflict, due to its own unresolved disputes with China.

As a result, when it comes to India, the US government and its “human rights” bodies pay lip service to “values” such as freedom, democracy, human rights, religious liberty and so on, while reserving the “lethal arrows” such as sanctions, boycotts, tariffs and regime-change techniques for countries designated as adversaries. For all the virtue-signaling and high moral posturing, at the end of the day, it’s all about power.