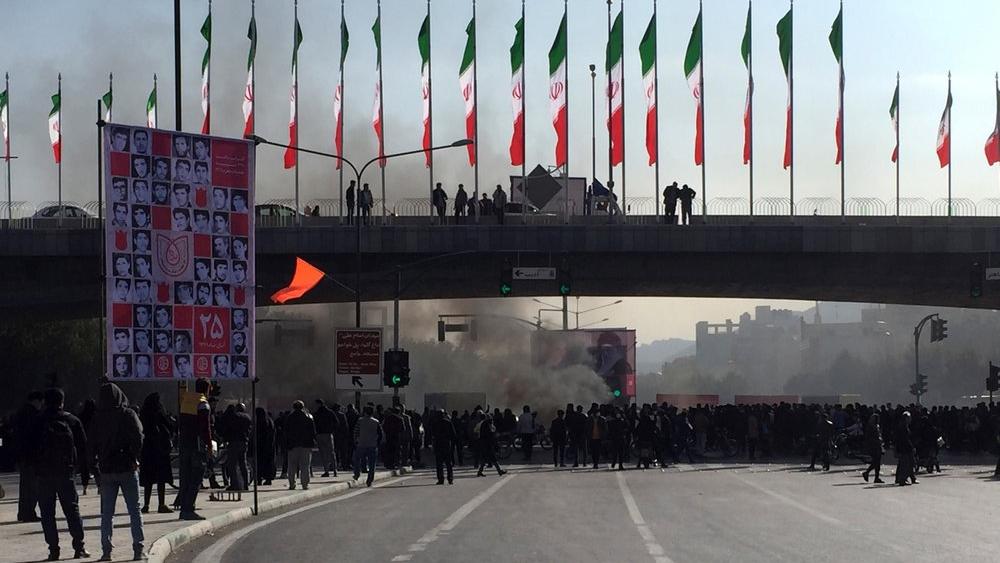 Regime change is in the air’: US establishment seeks to capitalize on Iranian protests… again

The protests in Iran that followed Tehran’s admission of its role in the downing of the Ukrainian passenger jet were met with an outpouring of support from Washington. But is it about Iranians, or regime change?

US officials and establishment figures certainly spared no effort as they went out of their way to show how much they supposedly admire the ‘courage’ of Iranians who took to the streets to vent their anger at the fact that a Ukrainian passenger jet, with many Iranians on board, was mistakenly shot down by Iran’s military – something Tehran admitted of its own volition before the results of the crash investigation were made public.

However, Washington apparently decided that this tragedy, which took the lives of 176 people, is a good enough reason to remind Iranians – who are already consumed by grief – just how much they are ‘suffering’ at the hands of a supposedly ‘oppressive’ regime that, by sheer coincidence, turns out to be America’s arch-rival in the region.

President Donald Trump spent the last couple of days tweeting compliments to the protesters and warnings to Tehran, both in English and in Farsi. On Sunday he demanded that Tehran “stop the killing of your great Iranian people.” There are no reports of deaths during the protests over the plane downing, even though law enforcement had to deploy tear gas and water cannons against an agitated crowd on several occasions.

Earlier, the president went so far as to remind Iranians that he – who vowed just days ago to annihilate 52 targets on Iranian soil in the event of a conflict with Iran, including prominent cultural sites – has allegedly stood with them since the beginning of his presidency.

Other US officials also wasted little time before they joined the cheering chorus of the Iranian protesters’ supporters. American Ambassador to the UK Woody Johnson took to social media on Sunday to express his admiration for the protesters and “call out the cruel Khamenei regime.”

Pentagon Chief Mark Esper, meanwhile, hinted at how Washington really views the protests sparked by the downing of the Ukrainian jet. “You can see the Iranian people are standing up and asserting their rights, their aspirations for a better government — a different regime,” he told CBS’s ‘Face the Nation’.

Former US National Security Advisor John Bolton – a notorious American arch-hawk and a big fan of the idea of launching a war against Iran – was much blunter in his words, openly stating that “regime change is in the air” and “the people of Iran can see it.”

State Secretary – and former CIA Chief – Mike Pompeo was the first, though, to try his hand at interpreting the “voice of the Iranian people”, and stopped just short of openly calling for a regime change on Saturday.

It is true that Iran is still reeling from the tragic Ukraine International Airlines Flight 752 crash. Aggrieved Iranians are hitting the streets of Tehran for the second day amid growing public outcry over the government’s actions.

The latest protests in the Iranian capital are far less brutal than those in Chile or Bolivia in late 2019. However, the US establishment somehow appears to be much less sensitive to the plight of the protesters in countries where it does not suit – or even runs counter to – Washington’s own agenda. After all, America did not say a word when some two dozen protesters opposing the neoliberal austerity policies of President Sebastian Pinera were killed in Chile last year.

The US seemingly stayed just as indifferent to the fate of protesters in Bolivia, where at least 31 people were reportedly killed during clashes with soldiers and riot police in November. The crackdown against demonstrators was launched by a government that came to power after President Evo Morales was forced to resign under pressure from the Bolivian military in a coup, which Washington praised as a “significant moment for democracy.”

When it comes to America’s adversaries, though, any sign of protest sparks a keen interest in Washington. The reasons for this interest, however, do not appear to be humanitarian. During previous protests in Iran, sparked by the rise in fuel costs, Pompeo urged Iranians to send him videos of the police crackdown – but only so that “champions of democracy” in Washington could impose even more sanctions against the rival nation.