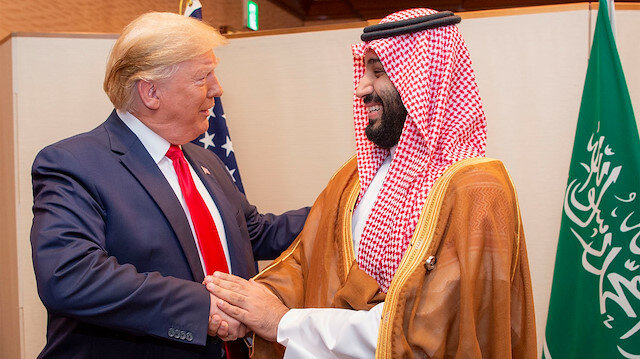 The conflict is personal between the world’s richest man, Bezos, and the world’s most powerful man, Trump.  Both are sons of immigrants: Bezos’ father from Cuba, and Trump’s mother from Scotland, both live in Washington, DC. , but their personal style and political values diverge.

Trump calls the Washington Post “Fake Media”, the term he coined to describe any critical coverage of himself. However, the newspaper’s editor said of Bezos, “I can’t say more emphatically he’s never suggested a story to anybody here, he’s never critiqued a story, he’s never suppressed a story.”

The Post’s coverage of Saudi Arabia, the critical columns by Jamal Khashoggi, and the coverage of his gruesome death and dismemberment at the behest of MBS have all angered MBS.

Andrew Miller, a Middle East expert, said: “He probably believed that if he got something on Bezos it could shape coverage of Saudi Arabia in the Post.”

Bezos has been described as incredibly intelligent, and able to control his emotions and responses.

In a legal complaint, Amazon accused Trump of intervening in a $10 billion Pentagon contract, JEDI project.  Even though Amazon Web Services had previously successfully built cloud services for the CIA, Trump made sure to thwart Amazon from the JEDI contract, because Trump perceives Bezos to be a ‘political enemy’.

Trump has repeatedly attacked Bezos for years on Twitter, falsely claiming that Amazon abuses the US Postal Service, which was debunked by a House Committee, which stated, “It is highly inappropriate to use the authority of your office to attack a political rival and seek to impair his business financially,” after Trump personally pushed postmaster general Megan Brennan to double the rate the USPS charges Amazon.

In January 2019, Pecker’s National Enquirer published a special edition that exposed an extra-marital affair Bezos was having with Lauren Sanchez.   Bezos said AMI had threatened to publish more text messages and explicit photos unless he ceased his investigation into how the National Enquirer obtained his messages. Bezos concluded that the intimate photos of Bezos must have come from MBS, through the phone hack.

Plecker used a $200,000 contract with Michael Sanchez, brother of Lauren, to cover-up the source of the explicit photos. Michael admits he sold some text messages but vehemently denies sending any explicit photos.  Bezos said that AMI specifically was threatening him with ‘penis selfies’.

Gavid de Becker, head of security for Bezos, described MBS and Pecker as close friends, and both were close to Trump.

Despite international and domestic outrage at the brutal death of Jamal Khashoggi in the Saudi Consulate in Istanbul in October 2018, Trump stands in defiant defense of MBS.  “The United States intends to remain a steadfast partner of Saudi Arabia to ensure the interests of our country, Israel” and all other partners in the region,” said Trump, and added, “[It] could very well be that the Crown Prince had knowledge of this tragic event – maybe he did and maybe he didn’t!” Trump’s son in law, Jared Kushner, also maintains close ties with MBS, who he frequently contacts on WhatsApp.

Agnès Callamard, the UN special rapporteur found Khashoggi was the victim of a ‘deliberate, premeditated execution, an extrajudicial killing for which the state of Saudi Arabia is responsible.

The CIA has concluded that MBS, ordered the killing of Khashoggi, and the evidence included an intercept showing a member of the kill team calling an aide to MBS and saying “tell your boss” that the mission was accomplished.

Bezos met MBS at a dinner in California on April 4, 2018. They exchanged phone numbers to communicate later on WhatsApp.  On May 1, an encrypted video file was sent from the MBS phone to Bezos’ phone, and within hours Bezos’ phone began sending massive amounts of data to MBS’s phone, and this continued for months undetected by Bezos.  Khashoggi was murdered and dismembered five months later.

UN special rapporteurs, Agnès Callamard and David Kaye said in a joint statement, “At a time when Saudi Arabia was supposedly investigating the killing of Mr Khashoggi, and prosecuting those it deemed responsible, it was clandestinely waging a massive online campaign against Mr Bezos and Amazon targeting him principally as the owner of the Washington Post.” “The crown prince at the heart of a campaign of surveillance and hacking”, Callamard said.

UN experts are demanding an immediate investigation by the US into evidence indicating that Bezos, was hacked with spyware deployed in a WhatsApp message sent from MBS. The evidence cited in the report carried out by FTI Consulting, at the request of Bezos, and was given to the UN experts.

According to the UN experts, the Saudi Royal Guard bought surveillance software in November 2017, from NSO Group, which is an Israeli company that makes the Pegasus spyware.