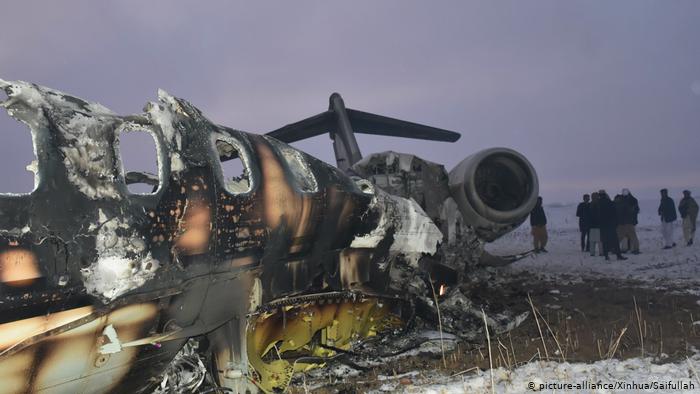 Afghanistan: Remains of US servicemen killed in crash recovered

The United States has recovered the remains of individuals from a US military aircraft that crashed in Afghanistan.

On Monday, the US military said an E-11A jet, built by Bombardier Inc, had crashed in the province of Ghazni in an area controlled largely by the Taliban militant group.

US and Afghan officials told Reuters on Tuesday that the Americans were in the process of confirming the identities of two US service members who were on the plane and killed in the crash .

Earlier on Tuesday, Afghan forces and Taliban militants had clashed in the region where the US military plane had crashed as the government forces tried to reach the wreckage site.

A US military official, speaking on condition of anonymity, said multiple attempts had been made to recover the remains but they had been hampered by the terrain and weather.

The official said the Taliban’s claim to have brought down the plane was misleading, adding that a preliminary probe before reaching the crash site showed that there was a mechanical error.

Meanwhile media reports said a top CIA official responsible for the assassination of Iranian Lieutenant General Qassem Soleimani was on the aircraft.

Michael D’Andrea was the top CIA official responsible for the assassination of General Soleimani, the commander of the Quds Force of Iran’s Islamic Revolution Guards Corps (IRGC), along with Abu Mahdi al-Muhandis, the second-in-command of Iraq’s Popular Mobilization Units (PMU), in a US airstrike in the Iraqi capital Baghdad early this month. “Andrea is the most prominent figure in the US CIA in the Middle East. He has been in charge of operations in Iraq, Iran and Afghanistan,” an unverified media report said.

The cause of the crash remains unclear.

“An aircraft of American occupiers has crashed in Ghazni province,” Taliban spokesman Zabihullah Mujahid said in a Pashto-language statement, adding that all the crewmembers on board have been killed, AFP reported.

Initially Afghan government officials suggested that a Boeing plane belonging to the Ariana Afghan Airlines had crashed and exploded into flames.

Afghanistan Asia Kabul Taliban Trump US_ARMY USA
Previous ArticleTrump deal: A prize for “Israel” at the expense of Palestine
Next Article US military plane crash: was this revenge?