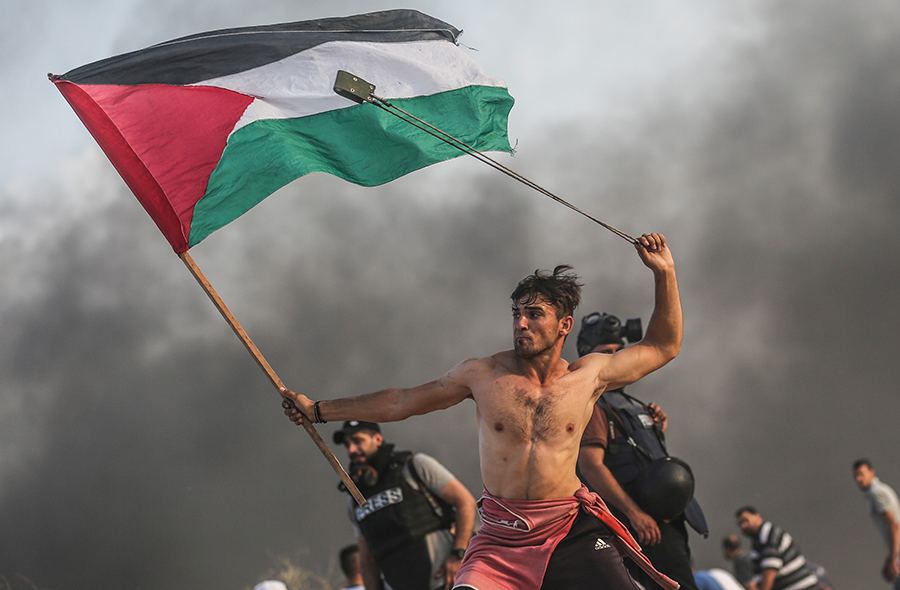 GAZA CITY, GAZA - OCTOBER 22: Palestinians throw stones and burn tyres in response to Israeli forces' intervention as they gather to support the maritime demonstration to break the Gaza blockade by sea with vessels in Gaza City, Gaza on October 22, 2018. (Photo by Mustafa Hassona/Anadolu Agency/Getty Images)

The Shame of the Century: Kushner’s deal is dead on arrival

Imagine a lawsuit being tried in a courtroom.  The case is coming to a close, and one side is sure of their position of being ‘in the right’, and then the opposing side offers a ‘deal’ to settle the case out of court.  However, the deal they offer is empty and does not satisfy the basic legal claims. They decide to reject the offer, and wait for the chance of winning their full rights, depending on the justice system, and the merits of their case as presented.

Details of the deal

The “Deal of the Century” has been written by Israeli officials, which is made clear not only from the style but content as well. President Trump announced the deal in the White House’s East Room on January 28, with his guest Israeli PM Benjamin Netanyahu and others, giving Israel full control of the settlements and Jerusalem as its undivided capital. The illegal settlements will now be considered the same as any other part of Israel under Israeli law and by the US. Netanyahu was thrilled that Israel can now annex land in Judea and Samaria, which previously had threatened to bring sanctions in the UN Security Council.  “The idea of dividing Jerusalem is buried,” Netanyahu said while adding “The idea of returning to 1967 lines as we knew it is buried. The right of return is buried; not even one refugee will be entering Israel.” Additionally, the IDF and Israeli security forces will have access to defend all territory west of the Jordan River, and  Israel will control “air, sea, land and electromagnetic fields,” according to Netanyahu. The US will accept Israeli sovereignty over all Jerusalem neighborhoods within the security fence.

This is an American plan, and an American map, and not binding on anyone.  Some would call it a diktat, defined as ‘a harsh settlement unilaterally imposed on a defeated nation’, or ‘terms of capitulation.’

The two-state solution has for decades been the basis of negotiations in the Israeli-Palestinian conflict and has been the official policy of the United States, the United Nations, the Palestinian Authority and Israel. Beginning in 1948, Palestinians fled, or were expelled from their homes; however, the UN Resolution 194 was adopted on December 11, 1948, which guarantees everyone has the right to leave any country, including his own, and to return to his country. Following the Arab-Israeli war of 1967, the UN adopted Security Council Resolution 242. The resolution calls for the withdrawal of Israeli troops from the occupied territories, adopted unanimously on November 22, 1967, and those are the borders referred to in the two-state solution. Jerusalem was to be divided into an Israeli West and a Palestinian East.

The Trump deal has bulldozed the two-state solution.

Resistance to the occupation of Palestine was most often coordinated by a committee made up of local social and political leaders, who held strikes, protests, and general political activism. The occupied people supported tax revolts, general strikes, teach-ins, prisoner hunger strikes, as Israeli law allows for the arrest and detention of Palestinians without charge or trial.

In 2005 the Boycott, Divestment, and Sanctions (BDS) movement began, targeting corporations and institutions that reinforce Israeli occupation and the denial of Palestinian human rights.

All nonviolent protests have been brutally suppressed and popular resistance leaders have been imprisoned, exiled, and killed.  All public gatherings of more than 10 people are forbidden by Israeli military orders enforced by the Israeli military in the occupied Palestinian territory.  Nonviolent protest actions and public political and/or cultural gatherings of Palestinians in areas under Israeli control are broken up by the Israeli military and police, often using tear gas, pepper spray, water cannons, rubber bullets, live ammunition, and physical force, resulting in deaths and injuries.

The ‘Deal of the Century’ regurgitates apartheid, a racist political system, and we only have to look to Israeli historian Uri Davis’s book “Apartheid Israel”.

Under the Trump deal, the Palestinians may have limited autonomy within a homeland that consists of multiple non-connecting enclaves scattered throughout the West Bank and Gaza. Israel would retain security control over the enclaves and would continue to control borders, airspace, aquifers, maritime waters, and electromagnetic fields. Israel would be allowed to annex the Jordan Valley and Jewish settlements in the West Bank. The Palestinians would be allowed to choose their leaders but would have no political rights in Israel, the state that rules over them.

The Trump deal for racial control and segregation harkens back to South Africa, before the ANC and armed resistance groups fought a bloody fight, which had international support, ultimately winning their freedom and rights with Nelson Mandela at the helm.

Like South Africa’s apartheid, the Trump deal gives the Palestinians autonomy over matters like education and healthcare, while trade, immigration, and security would remain under Israeli control. It would give Israelis a false sense of security while living under a regime based on racial oppression. The deal may constitute a crime against humanity, under the Rome Statute (1998), since it violates the rights and dignity of the Palestinian people.

President Trump has done more for Israel than any previous US President.  He allowed the personal ‘pet-project’ of his son in law, Jared Kushner, an Orthodox Jew, to reverse decades of US foreign policy. Many have questioned what gives the US the power to decide that Palestinians will live under apartheid?

According to Noam Chomsky, Gaza is the world’s largest open-air prison, where some 1.5 million people on a roughly 140-square-mile strip of land are subject to random terror and arbitrary punishment, with no purpose other than to humiliate and degrade. He wrote, a visitor to Gaza can’t help feeling disgusted at the obscenity of the occupation, compounded with guilt, because it is within our power to bring the suffering to an end and allow the Samidin to enjoy the lives of peace and dignity that they deserve.

Yisrael Beytenu leader, Avigdor Liberman, said: “The Trump plan is an escape plan from the real problems on the agenda” for Netanyahu, and the PM is using the deal to hide from real domestic issues he refuses to deal with. While Trump has been impeached by the House, Netanyahu has been indicted by the courts, and it seems the two wounded leaders are using the deal as camouflage.

Daoud Kuttab, a Palestinian journalist and secretary of the Jordan Evangelical Council in Amman, said after reading the deal, it “sounded more like a surrender dictate than a peace plan. The fact that of 13 million Palestinians, the Americans couldn’t find a single one to attend [the rollout] spoke volumes in its one-sidedness,” he added,  “It is a surrender document that will lay the grounds for Palestinians to continue to live under Israeli discrimination. This is a formula for further violence and unrest.”

The deal allows Israel to keep land they have managed illegally to grab, while they promise to pause for four years while the Palestinians capitulate to unjust terms, but the only offer on the table. If the Palestinians decide the deal is unacceptable, then Israel will undoubtedly begin to grab even more lands and justify their actions by pointing the finger of blame at the other side.  This is the likely outcome unless those insisting on justice will intervene from outside and exert pressure on Israel.