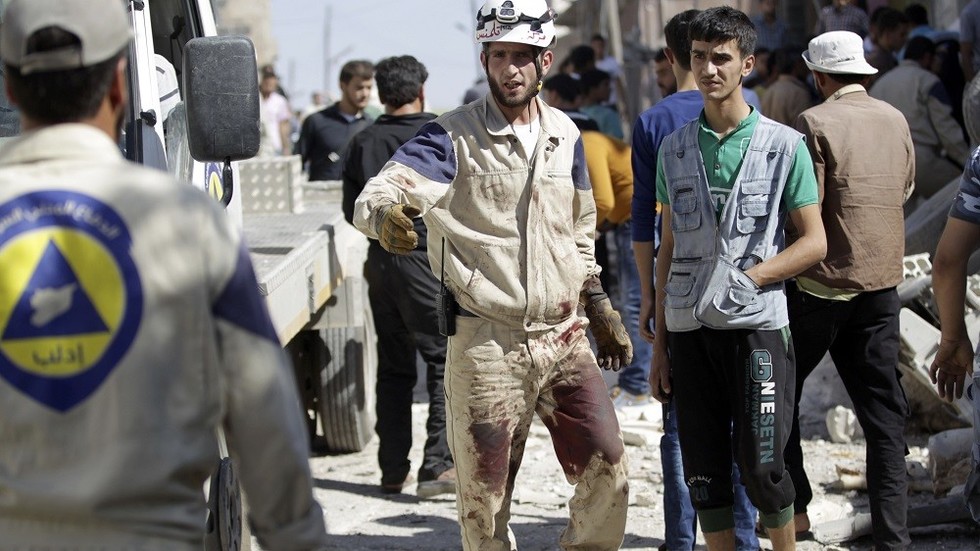 According to the Russian military, around 200 people are to take part in the new chemical provocation, and they are relatives of militants from the southern provinces of Syria.

The Russian Ministry of Defence says it has information indicating that the White Helmets group, backed by terrorists, is preparing a new provocation in Syria involving toxic agents, the ministry’s center for Syria reconciliation said on Monday.

According to the ministry, a group of 15 White Helmets members arrived in the Idlib de-escalation zone on 1 February to prepare a chemical provocation, which is expected to be conducted under the guidance of Hayat Tahrir al-Sham (formerly known as Al-Nusra Front*) leader, who has already engaged in the 2017 chemical provocation in Idlib’s Khan Shaykhun.

“The new provocation is expected to be staged in the Maarat al-Artik settlement, with participation of a crowd, comprised of around 200 people, who are relatives of militants who have arrived in the Idlib de-escalation zone, including children, who have been previously exported from southern provinces”, the reconciliation center said in a statement.

The White Helmets have delivered 400 litres of a chemical agent to the site in Idlib where they plan to stage and film the provocation, the ministry added.

The Reconciliation Center for Syria has called on all the participants of the planned provocation to refrain from carrying it out, and on the Turkish side to put pressure on the militants staying in the de-escalation zone’s area controlled by Ankara in order to prevent the staged attack.

Earlier, the Russian military stated that militants and the remnants of the White Helmets were planning new provocations in the province of Idlib, with the goal of accusing the Syrian government of using chemical weapons against civilians.

Head of the Damascus-headquartered Syrian Human Rights Network Ahmad Kazem also said earlier that more than 40 employees of the White Helmets arrived at the village of Einata in Idlib to allegedly prepare or stage a chemical attack in order to subsequently accuse the Syrian army.

The notorious White Helmets group has been repeatedly spotted operating side by side with militants in Syria, including Hayat Tahrir al-Sham, while it was also repeatedly accused of staging fake chemical attacks in the country. This includes the infamous 2018 false chemical attack in Syria’s Douma, which the Organisation for the Prohibition of Chemical Weapons (OPCW) blamed on the Syrian government.

The Syrian government believes that the Douma attack was staged by the White Helmets and used to justify the subsequent airstrikes by the US, the UK, and France.

The OPCW was also accused of deliberately doctoring and omitting crucial details, obtained from its own team on the ground, from the report on the alleged Douma attack.

As of today, numerous militant groups remain active in Idlib, carrying out attacks against the Syrian government. Located at the junction of the Hama Aleppo highway and linking Syria’s two largest cities of Damascus and Aleppo, Idlib has been a stronghold of militant groups since 2012.