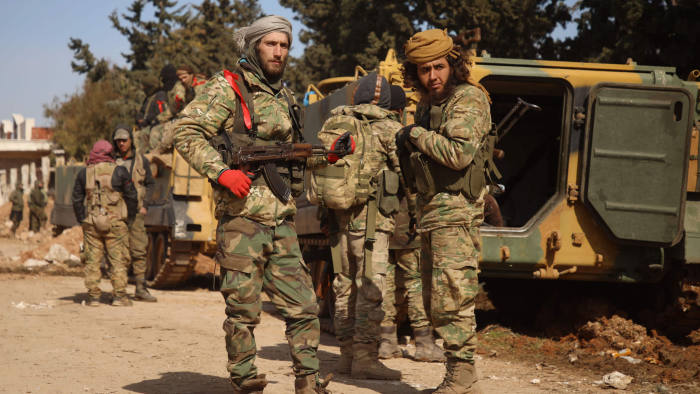 Turkish backed terrorists, following Radical Islam, which is a political ideology, have shot down a Syrian military helicopter in Idlib on Tuesday.  The battlefield of Idlib sits poised for imminent war. President Tayyip Erdogan said on Tuesday the Syrian government of President Bashar al-Assad would pay a “very heavy price” for attacking Turkish troops, as he threatened war against Syria after five Turkish soldiers were killed on Monday and an additional eight earlier.

The situation rose to a fever pitch on Monday as the Syrian Arab Army (SAA) attacked an observation post manned by the Turkish Army in Taftanaz, northeast of Idlib. The SAA is on a mission to clear the Idlib province of all Al Qaeda linked terrorists, which are backed by Erdogan, and others. In addition to the terrorists who occupy Idlib, Turkey has sent into Idlib large numbers of Turkish soldiers, as well as Syrian armed militias living in Turkey, such as the Syrian National Army (SNA) and the Syrian Liberation Front (SLF). Turkey is an invasion force, while the SAA fights to defend their country.

Witnesses on the border reported large convoys of Turkish military hardware, troops, and armored vehicles crossing into Syria in an almost continuous procession.

The terrorists and their Turkish backers have insisted on using the civilians as a bargaining chip in the battles.  Turkey, the UN, and most of the international community warn of a humanitarian disaster if the civilians are driven north from Idlib during battles to regain control of Idlib, the last remaining area in Syria under terrorist control.  For weeks, the Syrian Red Crescent ambulances, food trucks, and green buses sat empty and waiting along the humanitarian corridor of exit from Idlib, and an only small number came out and told of being threatened by the terrorists and generally prevented from escaping their occupation to safe areas in Syria.

The Al Qaeda affiliate in Syria was Jibhat al Nusra, and when they entered the cluttered Syrian battlefield in 2013, they were soon recognized as the fiercest and most violent of all the armed fighting groups. The Free Syrian Army (FSA), backed by the USA had failed to garner civilian support of their Jihad for “Regime Change”, and failed to recruit Syrian civilians to take up arms and join their ranks. After Jibhat al Nusra arrived, the FSA either joined their ranks or deserted the cause and migrated to Germany in the summer of 2015 exodus.

The US and others designated Jibhat al Nusra as a terrorist organization, which made supporting them an illegal act and punishable. Jibhat al Nusra then re-branded as Hayat Tahrir al-Sham (HTS) and is supported by Turkey and other countries.  HTS has worked with ISIS in certain instances in the past.

Idlib is the last terrorist occupied area in Syria, and the only region to have been under their control since 2012. Designated as a de-escalation zone in 2017, terrorists who refused to lay down their arms in battle zones across Syria were given the option of peacefully leaving on Green Buses to Idlib.

The civilians trapped in Idlib are in many cases, there by choice. The Green Buses offered as an alternative to resuming their past lives across Syria, was offered to armed terrorists and their immediate family, extended family, and others who share the Muslim Brotherhood dogma, which seeks to establish an Islamic ‘utopia’ in Syria.  Some of these civilians are Syrian and some are Chinese citizens, who were imported personally by Erdogan, as his secret “Turkic” weapon.  They are ethnic Uyghurs from China, who are a member of the Jihadist group Turkistan Islamic Party (TIP).

The original Idlib residents are scattered: some to Europe, some to Turkey, some to Latakia and the safety of the coast. Those homeowners, landowners and business owners of Idlib who are living as refugees, or displaced persons, are following events in Idlib and hoping to return one day and take up their rightful possessions, and begin anew.

Leila has been living in Latakia since 2012, and cleaning houses to support her family.  Her husband had been a farmer in Idlib, but when the terrorists arrived they began planting land mines in farmland, and civilians were killed while farming. Leila and her family left Idlib and have never gone back.  “Our land and olive trees are waiting for us. Our house was probably used by the terrorists, but we hope we can reclaim it one day,” she said.

In 2018 an agreement was reached between Turkey and Russia, and Turkey promised to remove all Al Qaeda terrorists, and to move all unarmed civilians to safe areas, thus separating the innocent, from the guilty.  Russia promised to assist the SAA in fighting terrorists, which is part of the global war on terror.

However, Turkey never fulfilled their promise to the agreement, which made the situation unsustainable. In early 2019 Russian Foreign Minister Sergey Lavrov commented on the Turkish-Russian agreement about Idlib, and the disturbing news that some Western countries wanted to preserve Idlib as a safe-haven for terrorists.  “There’s been news that some Western countries wish to do precisely that. They want this enclave where Jabhat al-Nusra (terrorist group outlawed in Russia) controls more than 90% of the territory to become a participant in the future political process,” Lavrov stated at a news conference. “It is clear that there can be no talks with terrorists. Our Western counterparts have repeatedly demonstrated double standards, so I cannot rule out that the information I’ve mentioned is well-founded.”

A Russian delegation headed by Sergey Vershinin, deputy minister of foreign affairs in charge of Syrian affairs, and Alexander Lavrentiev, the special envoy of the Russian presidency to Syria, met with Turkish officials in Ankara recently on two occasions but failed to agree.

The Turkish are waiting for a visit from James Jeffrey, the US special representative for Syria, on Wednesday before announcing a plan to reclaim territories the Syrian government has taken over since December last year.

The Russian Foreign Ministry said earlier that the Russian and Turkish militaries had again attempted to declare a ceasefire, but terrorists just stepped up their attacks. In response, the Syrian army launched a counterattack against the terrorists

Turkey set up 12 observation posts in Idlib province after an agreement with Russia in 2018; however, recently three of the observation posts were surrounded by SAA. Turkey invaded Syria and insisted on establishing military outposts, which were supposed to be observation towers, to facilitate their promised plan to separate terrorists from unarmed civilians.  This ruse was effectively used by Turkey to dig-in and defend the terrorists, who follow the same Muslim Brotherhood ideology as does President Erdogan, and his AK Party.

Turkey hosts 3.6 million Syrian refugees and insists it cannot take in any more.  “Russia and Assad are still pushing ahead with this offensive despite the fact Ankara has reiterated its red lines because they underestimate how vital stability in Idlib is for Turkey. Keeping the border shut is a huge national security concern,” said Dareen Khalifa, a senior analyst at the International Crisis Group.

In late 2019 the Syrian government announced a strategic goal to recapture and secure the M4 highway, linking the international Port of Latakia, with Aleppo, the economic hub of Syria, and to accomplish the same with the M5 highway, linking Aleppo, Damascus, and Jordan. This goal is an economic imperative for Syria which is still manufacturing goods, and growing agricultural products used domestically and for export.  The battle to clear Idlib of terrorists is crucial to the economic recovery of Syria. On February 8 the SAA captured the strategic town of Saraqeb, which is located at the junction of M4 and M5.

The terrorists in Idlib are well supplied, trained and have seemingly unlimited weapons and munitions. They have been attacking residential areas in Kessab, Latakia, Mahardeh, Hama, and western Aleppo consistently since 2012. The unarmed civilians who are killed, maimed and live in constant fear of a missile attack emanating from Idlib are the real victims.