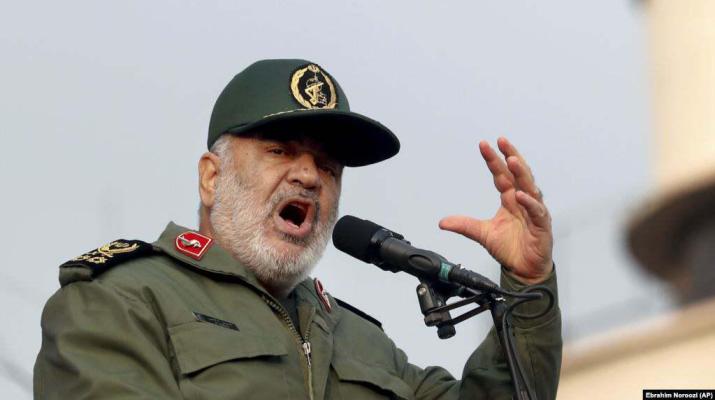 Tensions between Tehran and Washington have been simmering for over a month now after a US drone strike assassinated Soleimani in Baghdad on January 3. Meanwhile, this week, Iran and Israel once again exchanged threats, this time regarding one another’s operations in Syria.

“The cowardly and craven assassination of commander Soleimani and Abu Mahdi al-Muhandis by the Americans will lead to the liberation of Jerusalem by the grace of God,” Sharif said, his remarks cited by the Tasnim News Agency.

Speaking at a ceremony commemorating Soleimani in Urmia, northwestern Iran on Thursday on the 40th day after his death, Sharif claimed that the “terror attack against General Soleimani by the US’ arrogant regime started the end of the Americans’ presence in the region.”

The same was true insofar as the fight against “the Zionist regime” was concerned, the spokesman said. “His martyrdom, too, was also a help to that cause,” he noted.

According to Sharif, the Revolutionary Guards’ retaliatory attack against US forces at two bases in Iraq on January 8, 2020 was a ‘disgrace’ for the Americans, with their ‘expulsion’ from the region becoming a ‘certain fate.’

Sharif did not specify the timeframe for the planned ‘liberation’ of Jerusalem, a holy city to the world’s Jews, Muslims and Christians alike. Iran kicked off an annual event held on the last Friday of Ramadan known as ‘International Quds Day’ immediately after the 1979 Islamic Revolution, with the Islamic Republic’s first leader, Ayatollah Ruhollah Khomeini, declaring that the “liberation” of the city from Israeli “usurpers” was a religious duty of all Muslims.

Also on Thursday, Revolutionary Guards Commander Maj. Gen. Hossein Salami warned both the US and Israel not to make any “errors,” saying that both countries would be targeted if they did. “If you make the slightest error, we will hit both of you,” Salami said in a speech broadcast on Iranian television, according to Reuters.

Soleimani, 62, was killed in Baghdad, Iraq on January 3 when the convoy he and al-Muhandis were traveling in was attacked by a US drone. During the more than two decades that he served as Quds Force commander, Soleimani was responsible for coordinating Iranian operations abroad, targeting Osama bin Laden and al-Qaeda* in Afghanistan in 2001, assisting the Syrian and Iraqi governments in their campaigns against Daesh (ISIS)* and other terrorists between 2014 and 2017, and providing assistance to Lebanon’s Hezbollah movement in its conflicts with Israel.

On January 8, Iran launched missile strikes targeting two facilities hosting US troops, warning their Iraqi counterparts ahead of time about the impending strikes. The strikes were said to have resulted in no deaths or serious injuries, although the Pentagon has since admitted that at least 109 US servicemembers have been diagnosed with traumatic brain injuries, with most of these injuries proving minor enough for troops to return to duty.

The US maintains that it targeted Soleimani over the threat he posed to US forces in the region, and claims the general was responsible for the December 27 rocket attack on an Iraqi base which killed a US civillian contractor and kicked off a deadly series of back-and-forth escalations. However, last week, Iraqi military and intelligence sources told The New York Times that Daesh, and not Iran-affiliated Iraqi Shia militias, were responsible for the December 27 attack.

Also last week, Iran’s ambassador to Iraq confirmed earlier reports that Soleimani was in Baghdad on January 3 to deliver a message related to Iranian efforts to normalise relations with their Saudi neighbours.