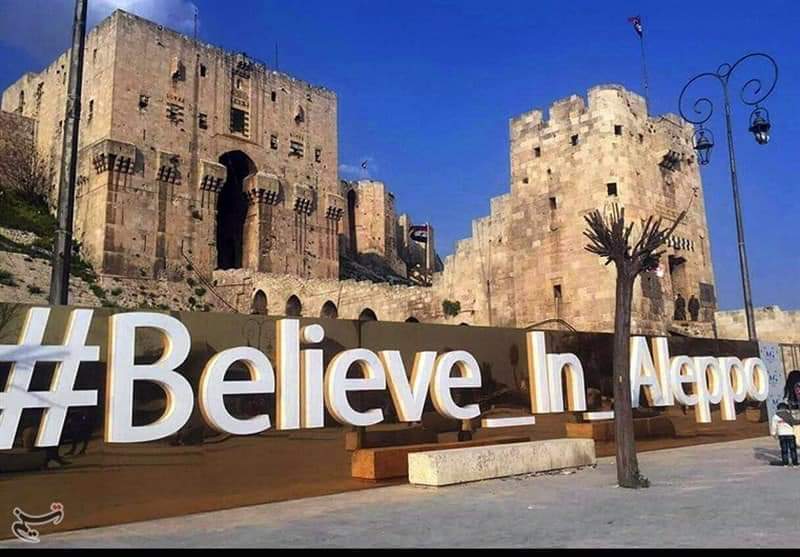 Last night Aleppo residents rejoiced in the streets despite the freezing cold. Men, women, and children, bundled up in winter clothes poured out into the streets to celebrate victory over the terrorists who had held their city under constant threat from the western countryside.  Those with cars drove the streets, honking horns and waving flags. The Syrian Arab Army had been advancing in the western countryside of Aleppo and declared the area free of armed terrorists. Now, all eyes are on Idlib, west of Aleppo, and the last remaining terrorist enclave in Syria.

Aleppo was one of the last places to be overrun by terrorists during the Syrian conflict which began in 2011, and had suffered under the oppression of the ‘Free Syrian Army’ (FSA), an armed militia following Radical Islamic ideology, and supported by the US and NATO.  Russia was asked to intervene militarily by the Syrian government in the fall of 2015, and by late December 2016, the terrorist enclave of east Aleppo was liberated. By then the FSA had been usurped by the Al Qaeda affiliate in Syria, Jibhat al Nusra. The international community and the western media warned that the fall of eastern Aleppo would be the largest humanitarian disaster in modern history.  Instead, the liberation of eastern Aleppo meant civilians who had lived under the black-hand of criminal terrorists for years were set free and could once again seek free medical care at the numerous medical facilities in Aleppo, which had never closed to service, and children could once again attend schools free of charge. Since then, Aleppo has been recovering, displaced persons returning, and businesses re-opening; however, the missiles and rocket strikes from west of Aleppo have not stopped, until last night.

Aleppo is a province, and the city of Aleppo has several millions of residents and is the industrial capital of Syria. Eastern Aleppo was liberated and is mainly ruined and waiting for rebuilding. The area west of Aleppo is the newest liberated and will provide security for the millions who had lived under the daily fear of a missile or rocket strike which often killed, and maimed people.

The terrorists and their supporters who survived the battle to liberate eastern Aleppo made their way to Idlib, which became a Jibhat al Nusra enclave, to the west of Aleppo.  Some of the terrorists and supporters remained, but some went to Turkey and then took the boat ride to Greece, and are now living lives in Europe, mainly Germany, supported fully by the tax-payers in Europe, who have never protested the EU support of armed terrorists, and now are paying the price for their silence.

One woman, who survived the battle of eastern Aleppo, is now an award-winning filmmaker.  Waad al-Kateab has become famous in the US and Europe for a film she made of her own life while living among the Jibhat al Nusra in eastern Aleppo.  “For Sama” tells the story of Waad and her husband, surgeon Hamza al-Kateab, who became well known on social media as ‘the last doctor in Aleppo’. The film never bothered to show the hospitals and doctors all working in central Aleppo treating patients who had been wounded by the daily barrage of rockets emanating from eastern Aleppo.  Her film shows you one side of the Syrian conflict, which is her side, that of the terrorists, their sympathizers and supporters, who oppose the Syrian government, and humanity.

When interviewed by ‘Al-Monitor’ she said, “We tried to tell viewers that the same scenes are being reproduced every day in other Syrian towns. Schools, hospitals and bakeries are shelled in Idlib and its neighboring towns. People want to know more about what is happening in Syria, which makes me happy.”  Waad al-Kateab adheres to a political ideology, which defends armed militias, and extremists. She is devoid of sympathy towards the millions of Syrians who are leading productive lives in areas under law and order. She wants her audience to think all of Syria is a war zone; however, that is not true. Idlib is the only terrorist-controlled enclave in Syria today. The people rejoicing in the streets of Aleppo last night are suffering economic hardship which was imposed upon them by Waad al-Kateab, her husband and their fellow extremists.

Sister Annie Demerjian of the Congregation of the Religious of Jesus and Mary lived through the battles of Aleppo from 2012 to 2016. She recalled days without water, electricity, and heat during the freezing winter. She experienced snipers threatening students taking exams, and terrorist attacks on the many churches in Aleppo.

“Before the war, we lived a very peaceful life in Syria. People lived side by side as brothers and sisters. We never questioned whether someone was Muslim or Christian. We knew them as our neighbors,” she said in an interview published yesterday. “Really, it’s a pity what happened to Syria. We had our freedom. Churches are free to celebrate,” she added.

“I always think about the West, and how they speak of human rights and human dignity, and at the same time they are imposing sanctions on us. What are they doing? Why do they want to harm the people of Syria? The sanctions, let us be honest, it’s the ordinary people who are suffering from it,” she said referring to the economic war imposed on the Syrian people by the US and EU.