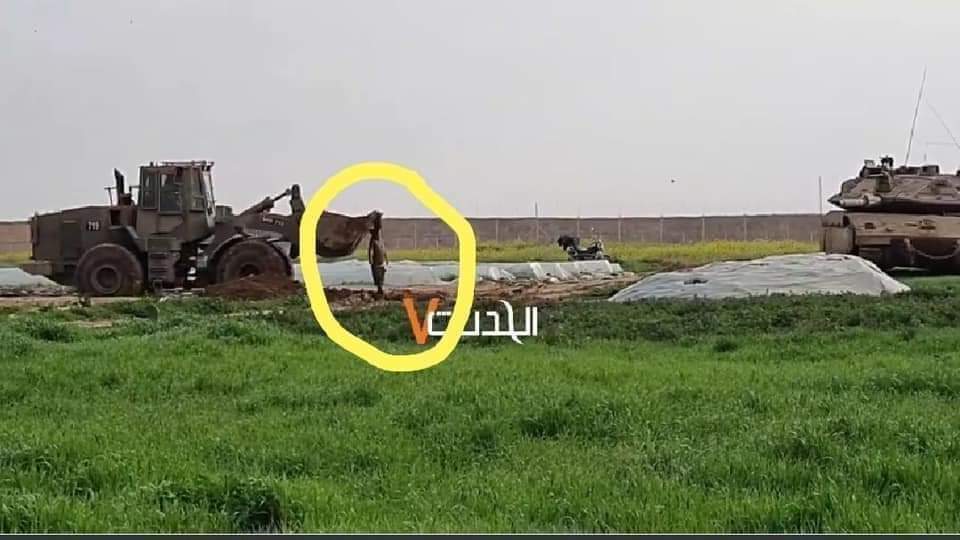 Mohammed Ali al-Naim, age 27 an engineer in Gaza, and married with a child, was shot and killed by the ‘Israeli’ military on February 23, near Khan Younis.  After killing him, fellow Gazan onlookers tried to retrieve his body to deliver it to his family, but an ‘Israeli’ military ‘Caterpillar’ bulldozer arrived, and gunfire was used to disperse the onlookers, with several of them injured.

A local journalist, Muthana al-Najjar, captured the scene on video as the teeth of the bulldozer’s bucket caught the clothing of the deceased, and then the operator lifted the bucket and the lifeless body was dangling in mid-air in a horrific display of the dehumanization of the Palestinian people, both dead and alive.

The bulldozer operator used his skills to make the corpse ‘dance’ momentarily.

The ‘Israeli’ military has a court-sanctioned policy of withholding the bodies of dead Palestinians, to prevent their families from funeral, and burial customs.  Denying families the right to bring their loved ones to burial, practice religious and traditional death rituals, and visit graves cause them indescribable pain.

‘Israel’ is currently holding the bodies of at least 52 Palestinians, and is refusing to return them to their families.  On January 1, 2017, for the first time, the Security Cabinet passed a resolution entitled Uniform Policy on the Handling of Terrorist Bodies, which defies international law and violates the human rights of Palestinian residents of the Occupied Territories.

The ‘Israeli’ Defense Minister, Naftali Bennett, defended his policy, “This is how it should be done, and this is how it will be done,” he wrote.  Bennett was playing to his supporters who are right-wing ‘Israelis’ with a blood-lust. However, one settler’s opinion was published concerning the February 23 event, “Here in short we have the history of the bestialization, the insensitivity, the evil, the corruption and the rot of the occupation.”

As horrific as the desecration of Mohammed’s body was, the incident reminds us of the even more gruesome murder of Rachel Corrie, a young American activist murdered by an ‘Israeli’ ‘Caterpillar’ bulldozer deliberately running over her.  Numerous onlookers, who had been with her in a peaceful and unarmed protest of the wanton demolition of Palestinian homes, came forward to document their eye witness account of her death on March 16, 2003. The ‘Israeli’ policy of punitive home demolitions is widely accepted to be in breach of international law.

Tom Dale, a British citizen from Lichfield, Birmingham, wrote his testimony on March 18, 2003.  “All the activists were screaming at the bulldozer to stop and gesturing to the crew about Rachel’s presence. We were in clear view as Rachel had been, they continued. They pushed Rachel, first beneath the scoop, then beneath the blade, then continued till her body was beneath the cockpit. They waited over her for a few seconds, before reversing. They reversed with the blade pressed down, so it scraped over her body a second time. Every second I believed they would stop but they never did. I ran for an ambulance, she was gasping and her face was covered in blood from a gash cutting her face from lip to cheek. She was showing signs of brain hemorrhaging. She died in the ambulance a few minutes later of massive internal injuries.”

Tom Dale continued, about the murder weapon: “If you’re wondering about the bulldozers: They’re American, Caterpillar-made armored D9 Bulldozers. I estimate the blade is maybe 8 ft high, 15 ft wide and the bulldozer more than 9 tons. They’re purchased from America using the $12 billion per annum military aid package that America gives to Israel.”

‘Caterpillar’ has been used by Israeli in crimes against the Palestinians for many decades.  ‘Boycott, Divest, Sanction’ actions are targeting ‘Caterpillar’ for its violations of human rights, and systematic abuse of the UN Guiding Principles on Human Rights and Business.

The Geneva Convention of 1949, Additional Protocol I, ensures that resistance and even armed struggle against a colonial occupation force are not just recognized under international law but specifically endorsed, particularly for peoples under colonial and racist regimes.  On December 3, 1982, the UN passed resolution 37/43, the lawful entitlement of occupied people to resist occupying forces by all lawful means.  Under section 21, the resolution strongly condemns “expansionist activities”, which would directly apply to ‘Israeli’ policy of illegal settlements upon already illegally occupied land in occupied Palestine.

The American, Frederick Douglass, a former slave, wrote of struggle. These words ring true today, even though he wrote them over 150 years ago:

“If there is no struggle, there is no progress. Those who profess to favor freedom, and yet depreciate agitation, are men who want crops without plowing up the ground. They want rain without thunder and lightning. They want the ocean without the awful roar of its many waters. This struggle may be a moral one; or it may be a physical one; or it may be both moral and physical; but it must be a struggle. Power concedes nothing without a demand. It never did and it never will.”