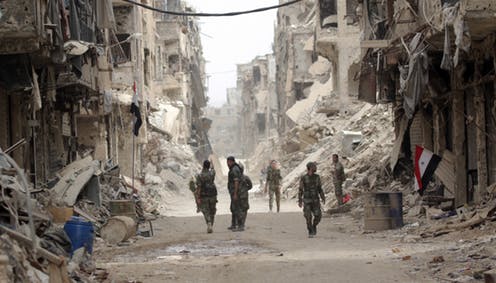 The road to rebuilding Syria runs through Aleppo

The current Turkish-Russian agreement in Idlib

Yesterday, the meeting between Turkish and Russian military delegations continued for their third day and will resume today.  The discussion focuses on the safe movement of traffic on the M4 highway connecting the international Port at Latakia with the industrial powerhouse of Aleppo.  A deal was signed on March 5th at Moscow between Presidents Putin and Erdogan after a five-hour meeting which produced a ceasefire based upon the establishment of a security corridor stretching both north and south of the M4, and implemented by joint military patrols.  The ceasefire does not include terrorist groups such as Hay’at Tahrir al-Sham (HTS) and Turkestan Islamic Party (TIP), and if those groups have not withdrawn by March 15th, the Syrian Arab Army, with Russian air support, may resume the battle to liberate all of Idlib.

In September 2018 an agreement was signed at Sochi between Turkey and Russia concerning Idlib, and stipulated that Turkey was responsible for the removal of all terrorists from the area; however, by October 15, 2019, Turkey had failed to deliver on their promise.  Some experts have wondered why Erdogan would commit to the removal of the terrorists when he is their biggest sponsor, and his ruling AK Party is following the Muslim Brotherhood platform, which seeks to establish an ‘Islamic State’ in Idlib.

In 2011, the ‘Free Syrian Army’ (FSA), supported by the US government, and campaigned for by US Senator John McCain, Republican of Arizona, was the armed wing of the Syrian opposition located in Istanbul, Turkey.  That militia did not last long, due to a lack of support from the Syrian people inside Syria. They had support from Syrians living abroad, who were predominately following the political ideology of ‘Radical Islam’ which is not a religion, or a sect.  These were followers of the Muslim Brotherhood, a global Islamofascist political group that has a large following in the USA, Canada, Australia, the UK, Germany, France, and Belgium.  Followers of the group are often highly educated, and in many cases pillars of society with strong political connections, in Western Europe, the US and Canada.

The FSA lacked support from Syrians and were facing defeat, this is when they were instructed by the CIA to call out to their ‘brothers-in-arms’, Al Qaeda aligned terrorists, around the world to come to Syria and fight the Syrian people.  Those terrorists who arrived, in the hundreds of thousands, through Turkey were on the payroll, and well-armed and supplied by the countries committed to ‘regime change’ in Syria: USA, UK, EU, NATO, Australia, Turkey, Qatar, and Saudi Arabia.  Once Al Qaeda was on the ground in Syria, from their HQ in Idlib on the Turkish border, there ceased to be any Syrian opposition, or any group classified as ‘rebels’, because the armed fighters were foreigners, and the FSA became history.  A foreigner in Syria cannot rebel against any government, except their own.

There are numerous armed groups in Idlib, but all experts agree that HTS is the biggest occupying force.  HTS was formerly named Jibhat al-Nusra, which was the Al Qaeda affiliate in Syria.  Jibhat al-Nusra had been supported by the CIA, but President Trump cut them off in 2017 and they re-named themselves to circumvent the US ban on assistance to Al Qaeda groups.  The western media repeatedly misidentifies Idlib as under ‘rebel’ control.  Idlib is only under terrorist control, as defined by the UN, EU and the US.  One of the biggest terrorist groups in Idlib is TIP, who was brought to Idlib under the personal support of Erdogan.  TIP fighters are Chinese citizens, of the Uyghur ethnic group, and were issued Turkish passports by Erdogan and transited through Turkey.  Erdogan identifies with the Uyghurs as the ancestors of Turkey and sharing the same Turkic language and culture.

The western media narrative is “peaceful protests in 2011 were met by a brutal crackdown by the Syrian government.”  Those words have been recited and written so many times, that some people believe them. A review of the documented facts reveals from the first day in Deraa in March 2011 Syrian security forces were shot and many died, firmly dispelling the notion of a peaceful protest.   The Libyan terrorists in Deraa had stockpiled arms in the mosque, where an almost blind cleric was used to provide cover for the highly organized operations, under the guidance of the CIA operating from the US military base in Jordan, just over the border from Deraa.

The rebuilding of Syria will be shared by Russia, China, Iran, and perhaps others.  The US and Europe have said they will not contribute to rebuilding Syria as long as the current Syrian leadership remains.  The West paid to destroy Syria but doesn’t want to pay for repairs. This position from the US-EU-NATO bloc further demonstrates the fact that the war in Syria was only about ‘regime change’ and was never a grass-roots project.

The western-backed terrorists continually targeted infrastructures, such as power-generating centers, water sources, hospitals, schools, and cultural centers.  The terrorists did not target military assets, but targeted churches and Christian villages.  Because the terrorists were following Radical Islam they wanted to turn Syria into a ‘Sunni Muslim utopia’ where Christians were unwelcome.  Their strategy was very effective, as the Syrian Christian community, dating back 2,000 years, has been decimated through deaths and forced migration.  The US-backed terrorists put the Syrian Christians on a ‘long march’ to Canada, the US, Germany, and Armenia.

Some Syrians who have become productive members of society in foreign countries may remain there and only travel to Syria as visitors.  These people might have found good incomes abroad, and have adapted to a new culture. However, not everyone living in a refugee camp in Germany or Sweden is happy.  Many Syrians long for the day when peace is restored to be able to go home. Approximately 1/3 of the original population is living outside of Syria.  Some will remain in their new homes, and others will return to their origins. The internally displaced Syrians will return to their origins once the peace of Idlib and the North East are secure.  The current residents of Idlib who may be sheltering in tents on the Turkish border will have to make a decision, will they lay down their arms and go back to their origins, or will they refuse to give up their political ideology and remain squatters in Idlib?  Those squatters in Idlib are not the homeowners and original residents of Idlib.  They are from Deraa, Homs, Hama, Aleppo, and are only living in Idlib because they had hoped their Islamic State of Idlib would survive under the patronage of the UN, Turkey, Qatar and other international humanitarian groups who have supplied them with food, clothes and medical care for 8 years.

This article is exclusive for mideastdiscourse.com and journalist Steven Sahiounie