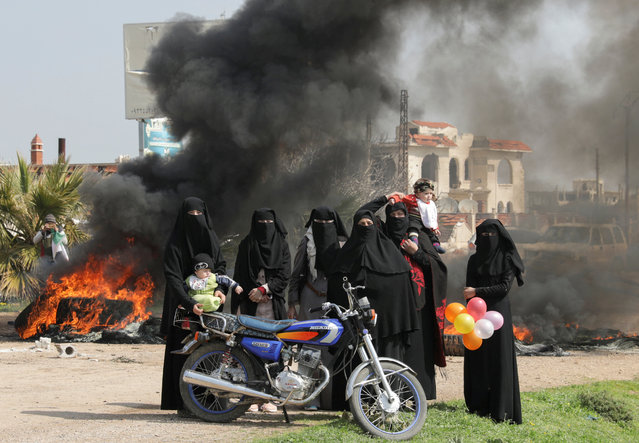 A picture tells a thousand words.  The photo was taken on March 15, 2020, in Idlib on the M4 highway by Reuter’s photographer Khalil Ashawi is revealing.  To the western world, the photo of a group of women in Syria dressed in black cloaks and face veils may seem to be normal.  Western news audiences have never been to Syria, and have no understanding of the culture of dressing customs of Syrian women.  The photos and videos of the wives of ISIS terrorists, many of whom are in prison camps in Syria and Iraq, are familiar to western viewers.  The head-to-toe black cloaking of women is not part of the Syrian culture or tradition. The photo taken by Ashawi recently is shocking to the Syrian people, who are not used to seeing women dressed like that inside Syria, and representing the Syrian women in international news coverage.

Syrian women come from 18 religious sects. The Sunni population comprises about 60% of the total; however, not all women wear a head-scarf.  Many Syrian women dress similarly to European and American women. Some women in rural areas, such as Idlib before the war, wear a long dress called ‘Jelabia’, which is colored, embroidered and even patterned.  Although it could be black, it most often is not. Those same women would most often have a headscarf, but never a face veil.

Syrians looking at the photo are deeply affected, with a realization that Syria has been changed by the war.  Not only have people been injured, killed, displaced, but have had a foreign image imposed upon them.

Rym, a young woman from Damascus, found herself in Idlib as she was trying to be smuggled to Turkey. She was confronted with the shock of being forced to wear “Islamic dress”, which was dictated by the Al Qaeda branch in Syria imposing Shariaa on residents. The terrorist group established the “Women Advocacy Office”, which prohibited women from wearing makeup, plucking eyebrows, using perfume, and required wearing a full black abaya (cloak) with a full-face veil (niqab).  The office patrolled streets enforcing the dress code on women, but never imposed any restrictions on men.

Senior international correspondents for CNN, Arwa Damon, and Clarissa Ward have both been inside the territory in Syria under the occupation of terrorists. Damon and Ward dress-up for their part in the drama, and choose to wear headscarves and clothing which are the fashion statement of Radical Islam.  Dressing up like the terrorists is not required, and can only mean they do this costuming to move the audience of CNN into accepting Radical Islam as ‘normal’. Syria does not have a dress code for women, it is a free country. Their costuming is not about blending-in, or being accepted by the group they are with, but about legitimizing it.

Deutsche Welle (DW) reported on March 19 about an ongoing conversation with a young woman, Mona, who was living with her husband in Idlib.  The article reveals that Mona does not belong in Idlib.  She is from Tabqa, a small city almost 60 kilometers (35 miles) southwest of Raqqa, which is more than a 4-hour drive from Idlib.  Mona is in Idlib because she chose to follow Radical Islam, which is a political ideology, and not a religion nor sect. She and her husband chose to live in “The Islamic State of Idlib”.  The DW article does not explain why people would choose to live in Idlib when they have no connection to Idlib’s lands, homes, farms, or businesses. Why would Mona, and others, choose to live as squatters in Idlib, paying no rent, owning nothing, and refusing to leave to a safe area such as Aleppo, Homs, Hama, Tartus, Latakia, or Damascus?  The rest of Syria offers free medical services to all citizens, whereas Idlib is not part of the Syrian Ministry of Health, which works with the World Health Organization. Before the war started nine years ago, Mona lived a good life, she says: “I was so happy. My family was relatively wealthy, my father ran several clothing stores, we had two cars. I was a spoiled, relaxed girl.”

Mona sent videos of life in Idlib to DW, with fully veiled women walking through the video. “Many women still wear the abaya and full veils because the armed rebel groups introduced it,” she said. Not every resident in Idlib agrees with the Islamic police state of Idlib, dictating women’s dress.  Shukran Orfali said, “For fifty years, every farm had their clothing style, and everything was okay, and nothing was wrong, everyone was living a good life. However, nowadays, we keep criticizing and interfering in each others’ private affairs in a way that even harms our pleasure of life.”

The offices of the Syrian Arab Red Crescent, a neutral humanitarian NGO, were ransacked in Idlib on March 14 by the Al Qaeda terrorists controlling Idlib. The UN and the IC Red Cross condemned the acts of Hayat Tahrir al-Sham (HTS), while also condemning Syria and Russia for trying to fight the terrorists.

On March 5 Turkish President Erdogan and Russian President Putin hammered out a ceasefire in Idlib after a 5-hour meeting in Moscow.  On March 15 the first joint patrol on the M4 highway, connecting Latakia with Aleppo, and passing to the south of Idlib, was disrupted by terrorists and the veiled woman who came out to protest the ceasefire.  The terrorists threw military-grade ‘nails’ in the road, to prevent trucks and vehicles from passing, and they also blew up an overpass which created a huge crater in the highway, making passage impossible.  The terrorists do not recognize the ceasefire, even though it was praised by the western media as a way to stop an impending humanitarian disaster in Idlib. The US-UK-EU pleas to stop the fighting in Idlib, and place blame on Syria and Russia, have not found acceptance among the terrorists and their civilian supporters in Idlib.  The Syrian population is being held hostage by a group of terrorists in Idlib, and their followers, who want to continue their “Islamic State of Idlib”. The media, and western leaders, fail to explain that the actual landowners, shop keepers, and their families want to return home to Idlib once the terrorists and the squatters are cleared out.  Western media fails to tell the story of the real people of Idlib, who are displaced and waiting for the freedom to go back home.