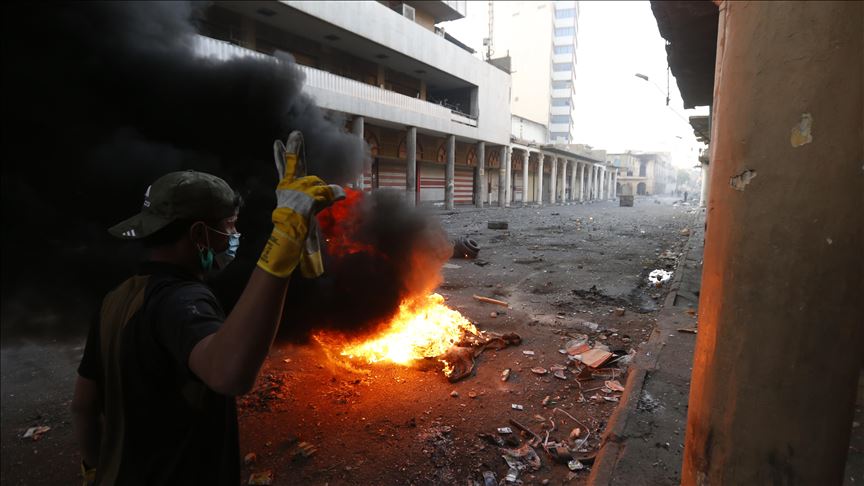 Iraqi Politics in a Storm, Heading Towards Instability and Chaos

Following Iraqi president Barham Saleh’s nomination of Adnan al-Zarfi (Zurufi or Zurfi) as the new Prime Minister, Iraq has entered a critical stage.  The Shia block is divided. The 30 days given to al-Zarfi to nominate his cabinet will lead either to a quorum of the parliament recognising his new cabinet and in consequences to a bloody future that could lead to unrest and even partition of Iraq or absence of a quorum. Why did President Saleh nominate al-Zarfi?

In 2018 Speaker Mohamad Halbousi proposed Barham Saleh as President. The proposal was adopted by “Al-Fateh”, the largest Shia coalition, with the agreement of the Sunni. Kurdish leader Masoud Barzani and US presidential envoy Brett McGurk were against the nomination of Saleh. It was Iranian IRGC Major General Qassem Soleimani who pushed for Barham Saleh to become president. Saleh, upon his nomination, promised Soleimani to be “better than Mam Jalal” (Uncle Jalal Talibani, one of Iran’s closest allies). Once Saleh was elected, he was asked by the “Al-Fateh” coalition, to nominate Adel Abdel Mahdi as prime minister, and he complied.  One year later, Abdel Mahdi was asked by the Marjaiya in Najaf to resign in response to street demonstrations demanding reforms, necessary infrastructure and better job opportunities.

Soleimani met with Shia leaders who all agreed– with the exception of Hadi al-Ameri, who wanted to be the Prime Minister of Iraq – to nominate Qusay al-Suheil. Al-Fateh forwarded the name to President Barham Salih who refused to appoint al-Suheil and went to Erbil for a few days, enough time for the street to reject the nomination. It was Sayyed Moqtada al Sadr – who rejected the nomination of al Suheil – who then contacted President Saleh and informed him that he represented the largest coalition, called “Sairoon”. Saleh, who feared Moqtada’s reaction, sent a letter to the parliament and the constitutional court asking them to define the “largest coalition”. None managed to respond clearly to this request.

The Iraqi constitution’s definition of the “largest coalition” is elastic and subject to interpretation. President Barham Saleh maliciously threw this apple of discord between the parliament and the constitutional court. It was Nuri al-Maliki who in 2010 introduced a new definition of “large coalition” to beat Ayad Allawi, who had managed to gather 91 MPs and was eligible to form a government. Al-Maliki formed a broad coalition after the MPs took their oaths and established that he was leading the largest coalition, as defined by the final alliances formed after the parliamentary elections, rather than by the poll results.

President Salih told Soleimani that the Shia coalition was divided and that he was not in a position to decide. At the same time, Salih accommodated the Americans who saw that Soleimani’s candidates were failing to win consensual approval. Iran’s Shia allies were effectively contributing to the failure of Soleimani’s efforts to reach an agreement among Shia over a PM nominee.

By forwarding his resignation on November 29, 2019, to President Salih, Adil Abdel Mahdi made it clear he no longer wished return to power. On February 1, Salih nominated Mohamad Allawi on Moqtada al-Sadr’s demand. Moqtada was given the leading role in choosing a candidate following the US assassination of Soleimani at Baghdad’s airport. This leadership was agreed to in Tehran by General Ismail Qaaani, who believed Moqtada should lead all groups because he was the main instigator of the protests. Even if the people in the street no longer welcomed Moqtada, he remained the only one capable of clearing the road and allowing the formation of a new government.


Iran’s priority was for the parliament and the government to concentrate on the withdrawal of all foreign forces, led by the US.

Mohammad Allawi failed to achieve a parliamentary quorum because he behaved condescendingly towards some of the Shia, the Sunni and the Kurds. Allawi believed that Moqtada’s support was sufficient and that all the other groups and ethnicities would have to accept his choice of ministers. Allawi presented his resignation to Salih on March 2.

According to article 73/3 of the Iraqi constitution, the sole authority for nominating a prime minister belongs to the president, who has 15 days to select a candidate. However, President Salih gave the Shia 15 days to choose a candidate. A coalition of seven members representing all Shia groups was formed—they presented 17 candidates. Three names were offered: Naim al-Suheil, Mohamad al-Soudani and Adnan al-Zarfi. Naim al-Suheil received the most votes but was rejected by Faleh al-Fayad.

Although al-Zarfi is a member of the al-Nasr party led by former PM Haidar Abadi (al-Nasr was formed in 2018), Nuri al-Maliki pushed hard for al-Zarfi (also a member of al-Da’wa party) and sent him to Beirut to convince the Lebanese to bless his nomination. Iran was against the designation of a US national (al-Zarfi holds a US passport). Confronted by Iran’s rejection, Al-Maliki managed to convince Moqtada al-Sadr to nominate al-Zarfi. Al-Maliki managed even if al-Zarfi was the one who fought against Jaish al-Mahdi – with US support – in Najaf in 2004, persecuted Moqtada in the city and expelled him to Baghdad. Moqtada al-Sadr – who recently refused any prime minister holding dual nationality – put his signature on the agreed paper offered to Salih along with Nuri al-Maliki, Haidar Abadi and Sayyed Ammar al-Hakim as per the newly claimed “largest coalition”.

It was a golden opportunity for Salih, with the absence of Soleimani, to please the Americans, the Kurds, the Sunni and a large group of Shia. Salih used his constitutional authority to nominate al-Zarfi as a prime minister. It will be a blow to Iran if al-Zarfi manages to form his government and present it to the parliament.  With the support of such a large coalition of Shia-Sunni-Kurdish MPs, he will no doubt reach the necessary quorum.

One of the main reasons Moqtada al-Sadr supported al-Zarif (apart from al-Zarif’s promise to satisfy Moqtada’s requests in the new cabinet) is the birth of a new group called “Osbat al-Thaereen” (the “Movement of the Revolutionary Association” – MRA). This group claimed twice its responsibility for bombing al-Taji military base where the US and other members of the coalition have a permanent presence. Sayyed Moqtada rejects any attacks on US forces and prefers acting through diplomatic channels (via the parliament). Many Iraqi groups close to Iran swore to seek the withdrawal of the US forces mainly due to the Pentagon’s refusal to discuss a full removal of troops. The US is only willing to relocate troops. Moreover, the US is reinforcing its presence in crucial bases in Iraq (K1, Ayn al-Assad and Erbil) and is about to bring the Patriot interception missile system to its bases in Iraq, without Iraqi government consent.

If al-Zarfi manages to get parliament approval, he may seek to avoid any withdrawal negotiations with the US. He would also merge Hashd al-Shaabi and attempt to disarm the Iraqi groups close to Iran. But al-Zarfi is not in a position to seek a change of the parliament’s decision related to the US withdrawal. That issue will concern the newly elected parliament. However, al-Zarfi, like any new prime minister, is expected to gather a large number of MPs in the forthcoming parliamentary elections, enough to seek the prolonged presence of the US forces in Iraq.

This scenario is only applicable if al-Zarfi manages to reach the parliament in 30 days with a new cabinet and to retain his allies, notably the Shia. Iran will do everything possible to make things difficult for al-Zarfi. The ex-governor of Najaf was accused of burning the two Iranian consulates in Karbala and Najaf last year and is expected to follow the path of his al-Nasr coalition leader (former PM Abadi) in respecting US sanctions on Iran. That would be devastating to Iran’s economy, already suffering from the harshest US sanctions ever.

Al-Zarfi as prime minister will be a major blow to Iran and to those who support its objectives and ideology in Iraq. The coronavirus will not keep Iran away from the Iraqi theatre; Iran will not allow Iraq to fall under US control. If al-Zarfi comes to power, the stability of Iraq will be shaken, and partition will be back on the table. An era of instability can be expected in Mesopotamia under an Iraqi prime minister considered to be an ally of the US, particularly following the assassination of Qassem Soleimani.