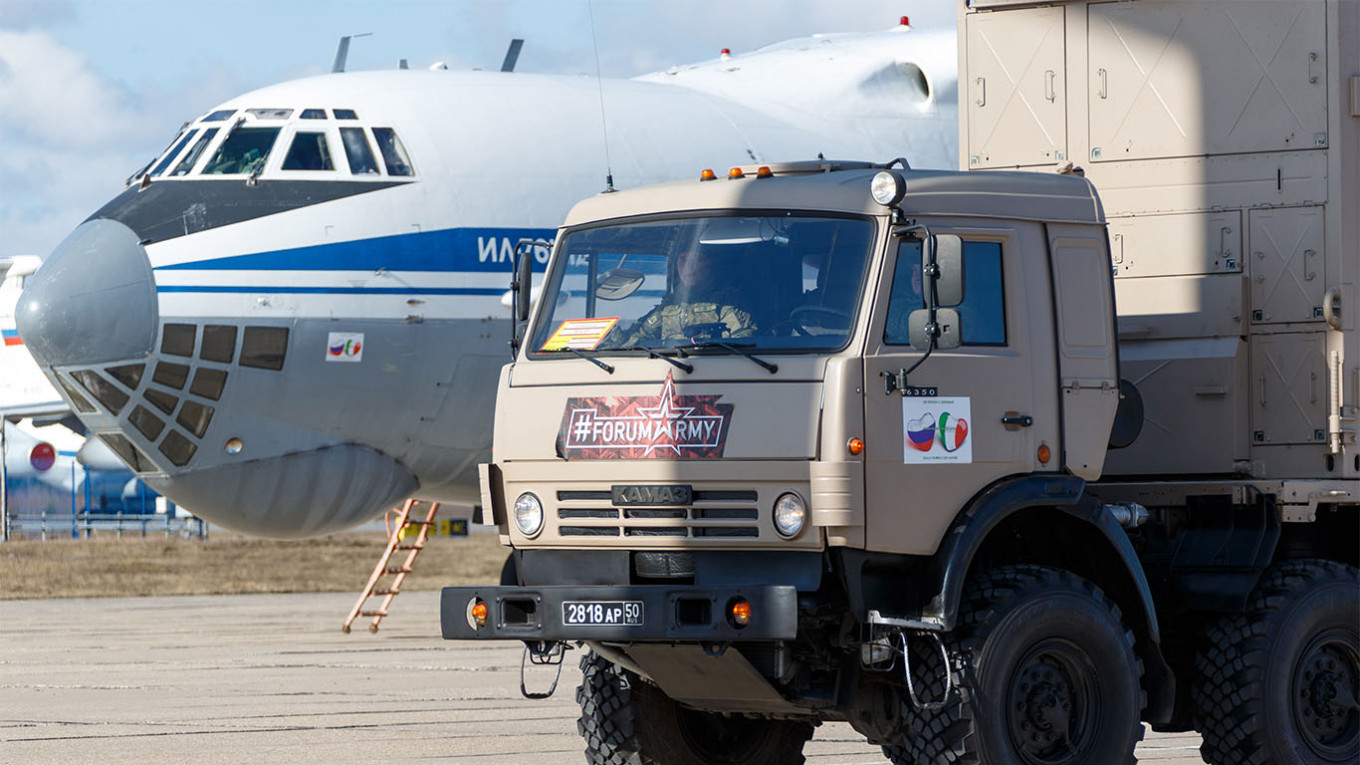 More than 15 military transport planes flew from Russia to Italy delivering disinfection units, 180 doctors, 100 personnel which include specialists in biological protection, nurses, ventilators, and masks.  The experts sent to Italy have worked on international epidemics including African Swine Fever and in developing an Ebola vaccine. Italy’s Prime Minister Guiseppe Conte had requested help from Russia, and the government commissioner for the coronavirus emergency, Domenico Arcuri, confirmed the help had arrived.  ‎‎Luigi Di Maio, Italy’s Foreign Minister, personally welcomed the first Russian plane to arrive on Sunday.   Videos emerged online of the trucks on their way to northern Bergamo near Milan, the hardest hit by the virus.

Lombardy regional councilor for health services, Giulio Gallera, announced the arrival of Russian doctors at Papa Giovanni Hospital in Bergamo. Moscow has a tradition of international solidarity that dates back to the Soviet era. “Never had so many Russian planes and personnel landed before in a NATO country,” reported the Italian daily ‘La Repubblica’.

Italy imports gas to fuel their power plants, and Rome has previously called on the EU sanctions against Russia to be relaxed, even though the plea has not been heeded, and sanctions have been repeatedly renewed.

Italy’s Civil Protection Agency Facebook page was full of grateful comments, and some anger at the US, which was seen as not forthcoming with aid in the darkest hours of Italy’s need.

The current global political scene is changing rapidly as a result of the coronavirus.  We are seeing new super-powers emerging, such as China and Russia, and former power-houses weakening, such as the US and NATO.  The shifting sands of alliances remind us of a similar situation before WW2. Italy, and several other EU members, may find themselves forging new alliances that are headed east.  The current US domestic political chaos gave Russia and China the chance to offer an alternative to nations who may be ready to wrest-free of the former US domination. This situation leads to a new version of the old ‘Cold War’ era, in which the world was split into West and East camps of influence.

The saying “don’t look a gift horse in the mouth” means that you shouldn’t criticize a gift, but that didn’t stop the Italian daily ‘La Stampa’ from reporting an unnamed high-level political source that most of the Russian supplies sent to Italy were ‘useless’.

Russia’s Ambassador to Italy Sergei Razov dismissed the report as perverse. “Such assertions are the product of a perverse mind. A selfless desire to help friendly people in trouble is seen as insidious,” Razov told Russian media.

When asked if Russia expected Italy to return the favor by trying to get EU sanctions lifted, Kremlin spokesman Dmitry Peskov described the notion as absurd.  “We’re not talking about any conditions or calculations or hopes here,” he said on Monday. “Italy is really in need of much more wide-scale help and what Russia does is manageable.”

Besides the desire to help a neighbor in need, there is the fact that the majority of the 658 people with confirmed cases in Russia have recently flown back from western Europe, making the case for Russian self-protection as well as Italian friendship.

Russian administration is well-organized and able to impose strong measures in such a crisis, as compared to other countries that have been slow to institute strict measures and precautions.

European Union countries have been slow to help their fellow members. Italy, France, and Spain have urged a massive response; however, the EU is divided on a potential rescue plan for the region’s economy, with Germany, the Netherlands, Austria, and Finland opposed to what they see as unreasonable expectations. Nine EU countries including France, Italy, and Spain have called for a common debt plan administered by a European institution to raise funds on the market; but, Germany and the other tight-fisted members stress that all EU countries can finance themselves.

Matteo Salvini, former deputy prime minister, speaking to the Italian Senate, said “In Brussels, it is clear they are yet to understand the situation. If the German Government keeps talking about the European Stability Mechanism (ESM) without conditions which provides that funds are given to Italy but have to be paid back in the future, Berlin and Brussels got it wrong,” clearly furious at the German and EU stance.

The origins of the Italian crisis

Mario Di Vito is a correspondent for the Italian daily, “Il Manifesto”.  He compares the coronavirus crisis in Italy to that of a world war. In explaining how the virus moved rapidly he points to Confindustria, the association of Italian industrialists, who pressured the government to not shut down production, and the Mayor of Milan, Beppe Sala, continued to tell people to leave their houses and to live a normal life; however, once the number of dead and infected spiked it was apparent those early decisions were deadly.  The stay-at-home order from PM Conte came much too late, and the weakness of the Italian healthcare system was exposed as the sick and dying rose into the thousands.

Two weeks of military-enforced stay-at-home orders have paid off with signs of the slowing down of new infections and deaths since Italy’s first positive test on February 20. Italy has by far the most virus deaths of any nation in the world, numbering 8,165. While the official count of positive cases is 80,539, experts assume the actual number may be much higher. At least 33 doctors have died and 6,414 medical personnel have tested positive in Italy.

“We know it before we go into battle, and we accept it,” Dr. Luca Lorini, head of intensive care in a hospital in Bergamo told the Associated Press.