CORONAVIRUS Hype : How Far Can Governments Push People Before It Backfires 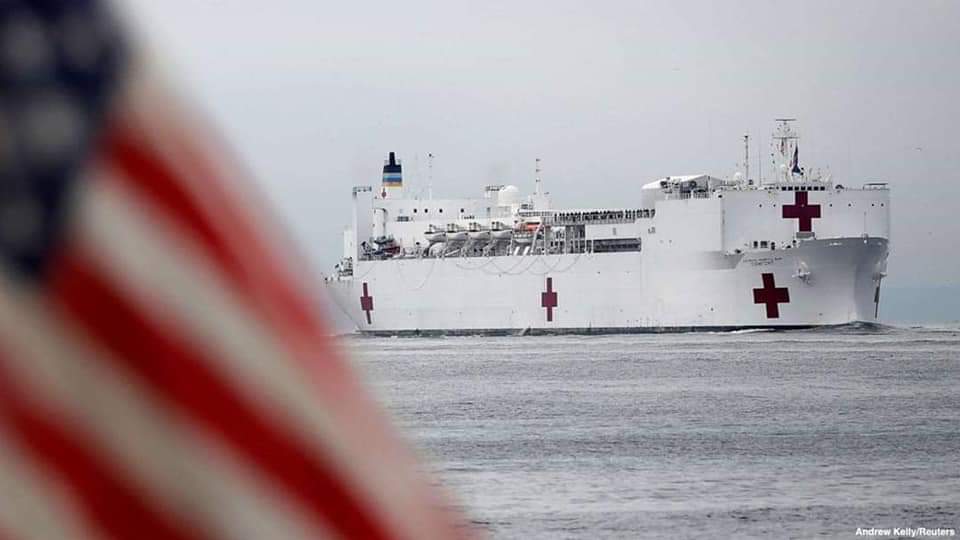 Additionally, New York’s Empire State Building lit up in red and white, revolving around the famous needle to resemble the lights that accompany a siren. The building’s owners call the display “the heartbeat of America.”

Both New York State Governor Andrew Cuomo and New York City Mayor Bill de Blasio went to greet the ship, which docked on Monday morning at Pier 90 in the West Side of Manhattan.

“We all watch something absolutely extraordinary, absolutely inspiring as the USNS Comfort enter New York Harbor, coming here to save the lives of New Yorkers in our hour of need, ” de Blasio made the remarks after welcoming the ship.

It will start treating non-COVID-19 patients so as to free up beds in local hospitals which can be focused on fighting the pandemic by establishing more intensive care units, officials have said.

“We realize at this moment that our nation has heard our plea for help here in New York City. And there could not be a better example of all of America pulling for New York City than the arrival of the USNS Comfort,” the mayor added.

At the same time, it would appear that infection numbers are lowering for a few days in a row, while the deaths remain relatively high, which could potentially mean that the peak of the infection in Italy is nearing, and the situation may begin recovering slowly.

The number of recoveries in Italy grew by 1,590, up to total 14,620. This marked the highest daily increase since the pandemic broke out in northern Italy on February 21st, according to Civil Protection Department chief Angelo Borrelli.

In addition to rapidly spreading in the US, Spain is the European country which appears to be far from its peak, with infected numbers rising rapidly each day – on March 30th the new registered cases were 7,846, to a total of 87,956, while the new deaths were 913, to a total of 7,716.

Various industries and enterprises have been affected during the fight against the COVID-19 epidemic, said Xi.

A series of policies have been introduced and will be improved in tandem with the changes of the situation, said Xi, adding more targeted measures will be rolled out to help SMEs restart production and further develop.

“We need to rise to the challenges. With the support of the Party and the government, we must stick together through thick and thin to overcome the difficulties,” Xi stressed.

In Russia, the active cases remained 1,836 by the end of the day on March 30th and now cases are yet reported in the early hours of March 31st.

Moscow is on lockdown, with other areas following suit.

Notably, the Moscow authorities created a Telegram channel for the anti-COVID-19 headquarters. What is of interest is that Telegram is officially blocked in Russia. This move itself demonstrates that Moscow authorities (and wider the neo-liberal part of elites) toss a challenge to the  patriotic part of elites surrounding President Vladimir Putin. The country’s capital’s authorities are using an application, blocked by a government decision to disseminate official data.

Since, Russia still has a relatively low number of deaths to COVID-19, below is a review of those who have succumbed to the disease, and their underlying conditions.

They are as follows:

First of all, this starts reminding strongly of the statistics of the deaths in Italy and other countries, with more men dying, and people with various (severe and mild) underlying conditions, who were exacerbated by COVID-19, or were simply above the life expectancy and with terminal conditions, but happened to have the virus.

Separately, a new analysis by researchers at Imperial College London, estimated that the potential impact of interventions in 11 European countries to counter the coronavirus pandemic – including school closures and national lockdowns – likely prevented up to 120,000 deaths.

“Europeans, like many people elsewhere, have changed their lives profoundly in recent weeks.  This report makes clear early evidence of the benefits of these social distancing measures.  By keeping our distance from each other, we limit the opportunities for the virus to spread and reduce the risks of illness and even death among those around us.”

“This analysis show that the interventions European countries have put in place have significantly slowed the spread of COVID-19. However, it is not yet clear whether or how quickly these measures will cause the numbers of new cases to decline. Data collected in the next two weeks will be crucial to refining our assessment of this key point.”

Good news regarding measures aside, that means if the total infected rate doesn’t sit at above 700,00 but between 7 and 43 million (which is a gigantic margin), it would mean that the fatality rate of the disease is astronomically low.

And it would also mean that the severe measures, justified or not, are a sort of large-scale “sociological experiment” which aims to see how much repression would people be willing to accept, for a vague justification, and how politicized could the entire situation be. It could potentially also show how far people can be pushed before there’s riots on the streets, and the lack of “entertainment” leads to people finding ways to “entertain” themselves. As it has been proven time and again, mob mentality dictates that “entertainment” usually means decapitating the elite.