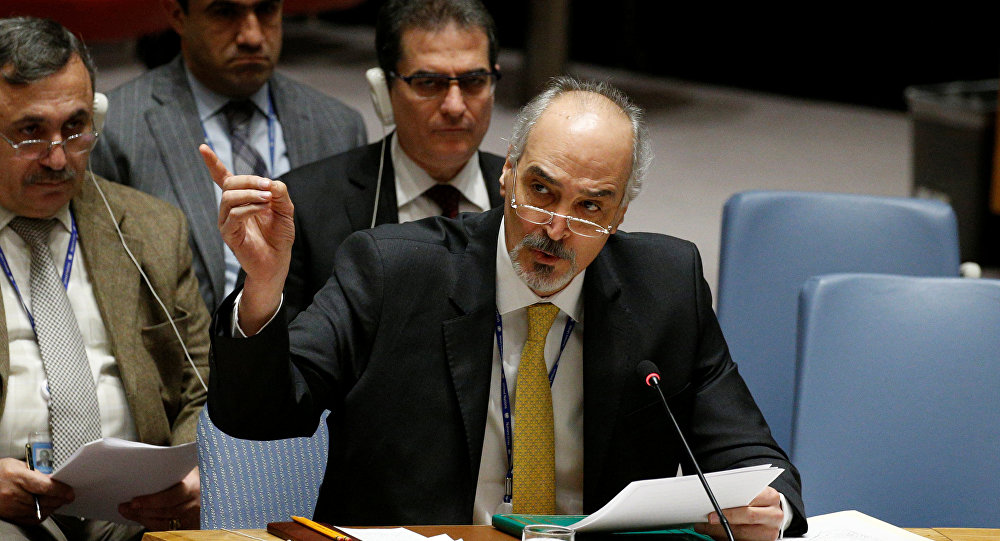 Syria’s Ambassador to the UN Bashar al-Ja’afari has reiterated a call by his country for immediate and unconditional lifting of all US economic sanctions, a few days after the coronavirus killed the first patient in the Arab country.

In a letter to UN chief Antonio Guterres and president of the UN Security Council Zhang Jun, Ja’afari lambasted remarks by US State Department official James Jeffrey who accused Damascus Monday of using “cynical ploys” and urged Syrians to “count” on Washington in “delivering humanitarian assistance to people in need”.

Ja’afari said such “irresponsible and misleading” comments by US officials “are just an attempt to cover the US crimes and violations against the sovereignty, independence and safety of the Syrian territories and against the security, peace and prosperity of the Syrian people”.

The senior Syrian diplomat also said that since 1979, Washington has been imposing arrays of unilateral and crippling economic sanctions against Syria, whose impact have been particularly aggravating since 2011 when a foreign-backed militancy began in the country.

He said the previous as well as the current US administrations have issued at least eight executive orders on further tightening the economic blockade on the Syrian nation.

Ja’afari said the unprecedented economic embargoes on Syria’s banking, energy, investment, import, export, communications and the air, sea and land transport sectors are all imposed with the aim of depriving the Syrians of their basic rights.

Such coercive measure, he added, have disrupted the process of delivering humanitarian aid to Syrians and undermined their ability to meet their basic needs.

Elsewhere in the letter, the Syrian envoy to the UN said the Arab country is facing an additional pressure in curbing the new pandemic, which demands implementing urgent measures by Damascus “to provide the basic infrastructure and the necessary potentials for the health sector”.

The COVID-19 disease, caused by a new coronavirus, jumped from wildlife to people in the Chinese city of Wuhan late last year and is currently affecting 203 countries and territories across the globe. It has so far affected more than 955,400 people and killed over 48,580.

The World Health Organization (WHO) has already declared the coronavirus outbreak a global pandemic.

Official figures by the Syrian government show that as of Thursday, 10 people have tested positive for COVID-19 and two others have lost their lives so far.

Ja’afari condemned “hostile” US polices against Syria as a flagrant violation of the UN Charter and of the principles of international law, particularly during the current pandemic.

He also called for the immediate withdrawal of US troops from all the Syrian territories, particularly its oil and gas fields, in order to allow Damascus to commence the process of reconstruction and rehabilitation of oil and gas plants and to use the income “for the interest of the Syrian people exclusively”.

Damascus “affirms that it has mobilized all of its available human, medical and food resources to serve all the Syrians wherever they are in the face of this global pandemic”, Ja’afari said.

“Any collective and international effort for curbing the spread of this dangerous pandemic cannot be accomplished in light of the continuity of the policy of imposing economic siege by some governments, including the US, on more than two billion people in our world,” he said.