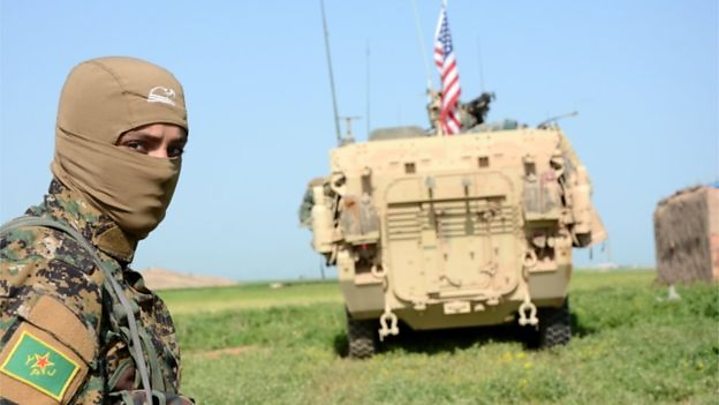 The Syrian Democratic Forces have for some time been no longer completely controlled by Washington. Recall that it was the Kurdish formations that for many years were in Syria the main shock ground force of the international coalition led by the United States. They played the role of infantry, the Pentagon armed them and prepared them, and during the offensive operations, the US military carried out planning, artillery and air cover.

“You don’t want to protect people, and you don’t want another force to come to protect us. You betrayed us. It is immoral!” – said at the end of last year, the Kurdish commander of the Syrian Democratic Forces, Mazlum Abdi, to US Deputy Special Representative in the international coalition against terrorists William Robak.

About six months have passed since then, and the situation in relations between the SDS and the US military command has not fundamentally changed.

Moreover, with enviable frequency, overseas senators and the military call the Kurds the main strategic partners of Washington in the region, and assure the leaders of this ethnic minority of all possible support.

However, in reality, the “Syrian Democratic Forces” have long been no longer completely controlled by the United States …

The first serious disagreements, as it very often happens, arose as early as mid-2019 financially. According to Damascus, the SDS leaders are confident that the command of the American military mission and General Pat White personally profit from the help coming from Washington.

Moreover, for almost a year now, Kurdish leaders have not been completely satisfied with the distribution of money from oil extracted in eastern Syria. Since recently, the command of the US mission in the region has almost completely abandoned the “services” of the Kurds: by mining, transporting and selling “black gold” with the support of mercenaries from various PMCs.

Serious disagreements between the Kurdish formations and the US military also systematically arise due to the US attitude towards the ISIS cells remaining in the region. Representatives of various American intelligence agencies flirted with the former and current ISIS militants without any embarrassment, drawing them to all kinds of provocations against the Syrian government forces.

The relatively loyal attitude of the Americans towards terrorists gave them a certain sense of impunity: imprisoned militants without constraint demand meetings with the American military, arrange debauches and provocations in places of detention.

One of these incidents received widespread coverage in the local media and ended with the ISIS terrorist riot in the Hasek prison. The “Syrian Democratic Forces” squads were able to suppress the uprising and return the militants to jail independently, without US assistance, which, according to some reports, refused to assist the Kurds.

After this incident, SDS leader Mazlum Abdi called on his US partners to completely reconsider their attitude to the anti-terrorist operation in Syria …

On the eve, one of the leaders of the Syrian Kurds, Aisha Hasso, made quite a sensational statement about the possibility of including local armed forces in the government of the SAR for a joint struggle against Turkish expansion in the province of Idlib.

Note that the statement of the representative of the Kurdish people is a kind of response to a recent interview with President Bashar Al-Assad, who stated that the Kurdish people’s self-defense units did not want to participate in the fight against Turkey and the militants loyal to Ankara.

Returning to the topic of the voluntary entry of Kurds into the SAA, one cannot but mention the conditions that are put forward by the representatives of the Syrian Democratic Forces.

Here we are talking about preserving the existing structure of the Kurdish formation in the north and east of the SAR, which, firstly, does not seem real, primarily because of the strong American influence on individual units of the SDS, consisting mainly of foreign mercenaries.

In conclusion, it should be noted that the Americans in every possible way push the Kurds to exit from their guardianship. And besides the above financial side of the issue related to illegal oil production, there is also a politically important moment: the United States turns to the Turkish leadership with enviable frequency with a proposal to abandon the Russian S-400 systems in favor of normalizing relations and “resolving the Syrian issue.” The latter in the USA, of course, means the Kurdish problem …

Well, the solution to the “Syrian issue” is really possible, but not as a result of the collusion of Washington and Ankara: it is the inclusion of Kurdish forces in the Syrian government forces that will allow not only to end the long-standing civil war in the republic, but also to finally defeat ISIS * and prevent the expansion of Turkey expansion and normalize the life of the Syrians on both banks of the Euphrates.