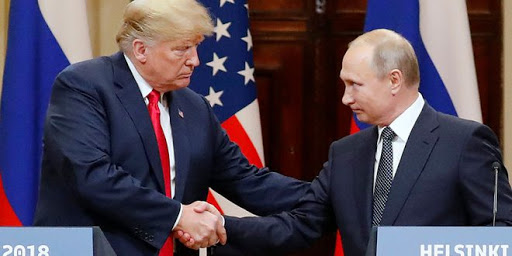 Russia’s urgent dispatch of counter-COVID aid to America was both symbolic and substantial in the sense that it improved the country’s reputation among average Americans which in turn advances Trump’s years-long case for a “New Detente” between these two Great Powers.

From Russia With Love

Observers could be forgiven for not believing it when they first heard the news, but Russia just urgently dispatched counter-COVID aid to America in a real-life scene that seems ripped from the pages of political fiction. Had anyone speculated about this scenario just a few short months ago, practically nobody would have believed them, but World War C is truly turning the world upside down faster than anyone could have expected. This humanitarian assistance was sent after Trump agreed to his Russian counterpart’s proposal during a phone call earlier this week, with President Putin likely offering his country’s aid in order to help the American people caught in the new global epicenter of this crisis and also to show his unwavering solidarity with the US during this time of need just like how he reacted immediately after he found out about the 9/11 terrorist attacks. Looking beyond his noble intentions, it’s clear that this move was both symbolic and substantial in the sense that it improved the country’s reputation among average Americans which in turn advances Trump’s years-long case for a “New Detente” between these two Great Powers.

Regarding the soft power angle, Russia killed several birds with a single stone, though it should always be remembered that it wouldn’t have been able to do this had Trump not approved. The fake news that up to 80% of its earlier aid to Italy was “useless” has now been debunked and all but forgotten after a country much more powerful than the Southern European one (and which arguably exerts a strong degree of hegemonic control over its affairs) accepted President Putin’s similar proposal for humanitarian assistance. Seeing as how the planet is now fighting World War C, this could serve to remind the average American of their country’s wartime alliance with the USSR during World War II against the shared scourge of fascism. Not only could that improve Russia’s overall standing in their eyes following four years of interconnected fake news scandals, but it could also have the effect of getting them to passively agree to any forthcoming moves that Trump might eventually propose related to easing the sanctions regime against that country. While their geopolitical rivalry still undoubtedly exists and probably won’t go away anytime soon (if at all), now is the perfect time for these two to consider the wisdom of more closely cooperating with one another on all fronts.

Their joint struggle against COVID-19 has captivated the world’s attention precisely because of how unexpected it was that Russia of all countries would end up sending humanitarian assistance to America. Trump willingly gave Russia an historically unprecedented soft power victory, but he did so with keen strategic calculations in mind. He’s been facing intense opposition from some of his permanent military, intelligence, and diplomatic bureaucracies (“deep state”) over the past few years over his desire to enter into a “New Detente” with Russia, which the author explained more in detail in his August 2019 analysis about how “The ‘New Detente’ Is Proceeding Apace, And China Should Be Very Concerned“. In a nutshell, the US believes that reaching a series of “pragmatic compromises” with Russia over Syria, Ukraine, and other issues could facilitate that country’s rapprochement with the West and thus comparatively lessen its growing strategic dependence on China by default, which Moscow turned to more out of necessity than choice following the sudden commencement of the New Cold War in 2013-2014. The problem, however, is that so-called “Cold Warriors” and other anti-Russian hawks believe that this strategy is fated to fail because they simply don’t trust Moscow.

Therein lays one of the geneses of the Russiagate conspiracy (the other being to discredit Trump’s populist policies at home), but Trump brilliantly realized the mutual benefits of letting President Putin score a soft power victory in order to advance their countries’ shared strategic interests related to the “New Detente”. With Americans now more aware than ever before that Russia isn’t the “dastardly villain” that many of them have been brainwashed by the “deep state” and its surrogates (both in Congress and the Mainstream Media) into believing, they might naturally be more in support of Trump’s original promise to enter into a meaningful rapprochement with the country after Moscow sent them aid that literally saved people’s lives. Before getting to that point, however, Trump and President Putin appear to be on the verge of a “goodwill experiment” to test one another’s true intentions given what the American leader said about his country potentially joining rumored Russian-Saudi oil talks to reverse the recent price crash that devastated the global economy at its most vulnerable moment. Should this initiative succeed and all three countries establish a mechanism (whether formal or informal) to restore the oil price, then the next phase of the “New Detente” might begin shortly after.

The US and Russia are already in talks on a wide array of issues including energy geopolitics in Europe, NATO, Ukraine, Syria, Iran, Afghanistan, and North Korea, et al., so it’s only natural for them to finally make some progress on reaching the long-awaited series of “pragmatic compromises” that Trump originally wanted to clinch during the first year of his presidency but was prevented from doing so by his “deep state’s” fake news Russiagate scandals. Now is the perfect time for defying the “deep state” with the support of the American people after they’ve come to suddenly have a much more favorable view of their country’s rival after it urgently dispatched humanitarian assistance to them with Trump’s support in order to help everyone improve their odds of surviving World War C. This soft power “coup” was made possible by Presidents Trump and Putin cooperating in pursuit of their shared interests, but it might (inadvertently in terms of Russian motivations) have the potential to become a strategic “coup” with time if Russia’s eventual rapprochement with the West lessens its growing dependence on China and thus places the People’s Republic in a comparatively more disadvantageous position than before. That’s certainly not Russia’s intent, but few doubt that it’s the US’.