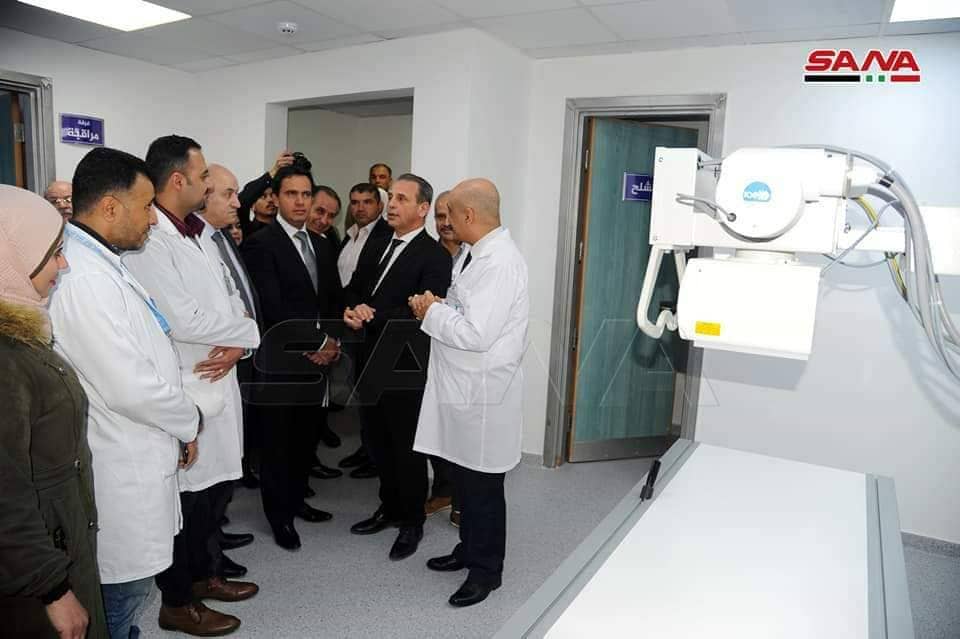 The Syrian Ministry of Health announced on Thursday that 6 new coronavirus (COVID-19) infections were detected in Syria, which raised the total number to 16 cases, and with 2 deaths.  Today, it was announced that 2 cases have recovered.

No cases of COVID-19 have been reported in the northwest province of Idlib, which is occupied by terrorists, but humanitarian organizations are concerned about the situation there, as the terrorists offer no medical services and are holding the civilians as hostages.  Hayat Tahir al-Sham (HTS), the Al Qaeda affiliate in Syria, is following Radical Islam, which is a political ideology and is neither a religion nor a sect. They have declared the province as “The Islamic State of Idlib”.  While the US, NATO, and EU have denounced the Islamic State of Iraq and Syria (ISIS), the ‘western civilized world’ has continued to support and defend the occupiers of Idlib, who some experts have described as a “Death Cult”.  The battle to rid Idlib of terrorists has been put on hold, due to the COVID-19 pandemic.

China’s ambassador to the UN has called for the lifting of sanctions on Syria, as a humanitarian measure that would allow Syria to buy needed medicines, supplies and equipment to combat the spread of COVID-19.  The US and EU sanctions have prevented Syria from buying even the most crucial items, such as medicines and replacement parts for medical equipment which sits unused. China has provided COVID-19 testing kits to Syria, but more is needed.

Dr. Nizar Yazigi is the Minister of Health in the Syrian Arab Republic.  Medical care in Syria is offered free of charge at about 100 public hospitals, and there are University teaching hospitals located in Aleppo, Latakia, and Damascus.  Over 9 years of war, hospitals were often targeted by the terrorists because they represented the Syrian government.  The Al Kindi Hospital in Aleppo was the largest cancer treatment center in the entire Middle East.  It was entirely demolished by terrorists in May 2014, as they had laid explosives under the foundation and detonated it.

Dr. Nima Saeed Abid, the representative of ‘The World Health Organization’ (WHO) in Syria, said: “We consider the situation as dangerous for two reasons, the first of which is that almost all of the detected cases have been for citizens who returned from abroad which means that their number might be larger.” He noted that Syria is an important pilgrimage site, with 2 notable shrines, those of Sayyidah Zaynab and Sayyidah Ruqayyah, both in Damascus, which attract thousands of visitors each year.  The Syrian government has since closed those 2 sites.

Dr. Abid insisted that the US-EU sanctions on Syria must be lifted to fully fight against COVID-19 and the WHO has given testing kits to the Syrian Ministry of Health.

“The current situation is new and unlike any, we have dealt with in Syria for the last nine years.  All Syrians – and all those who provide (humanitarian) assistance – are at risk,” Najat Rochdi told the ‘International Syria Support Group Humanitarian Task Force’, from the UN offices in Geneva. She stressed that efforts throughout Syria are being intensified, as laboratories and isolation wards are prepared, in addition to public awareness and mitigation measures are in place.  Communities at risk are being identified while health facilities and intensive care units are prepared.  Ms. Rochdi insisted that additional medical equipment and supplies are urgently needed, and demanded that US and EU sanctions be lifted for Syria to buy the needed medical supplies to fight the COVID-19 pandemic.

Geir Pedersen, the Secretary-General’s Special Envoy for Syria, told the UN Security Council on Monday, that Syria’s healthcare system is at high risk of being unable to contain the COVID-19 pandemic.  He stressed the need for the ceasefire in Syria to continue and praised the humanitarian staff, doctors, and nurses who risk their own lives to save others.

The European Commissioner for Neighborhood and Enlargement, Olivér Várhelyi, said: “The European Union is stepping up its assistance to countries hosting Syrian refugees, in particular, Jordan and Lebanon but also others, as a signal of solidarity with the most vulnerable populations in difficult circumstances, exacerbated by the coronavirus pandemic.”

EU funds are used for improving the public health system in Jordan, providing education for Syrians in refugee camps in Jordan, prevention and management of diseases, and improving Syrian women’s income opportunities in Jordan. The EU’s ‘Regional Trust Fund in Response to the Syrian Crisis’ was established in 2014, and has provided over 900 million Euros for Lebanon, and over 500 million Euros for both Jordan and Turkey.

However, the EU has never donated any money or aid of any type to the Syrian people who live inside Syria.  It is estimated that one-third of the Syrian population (23 million pre-conflict) have left the country, which leaves about 14 million Syrians living today inside Syria, and the majority are living under the Syrian government control.  Idlib is the only area in Syria under terrorist control, and the population there is about 2 million. While the EU supports the refugees abroad, and the civilians of Idlib, they do not support or help the millions of needy Syrians who are trying to survive the US-NATO attack on their country, the economic collapse caused by war, and the devastating US-EU sanctions which prevent even medicines and medical supplies from being imported to Syria.

Measures were taken by Damascus

The Syrian government began measures on March 15 to combat the spread of COVID-19, by closing universities, schools, government offices, restaurants, and shutting down all intercity public transportation across the country. On March 20, the government banned entry for foreigners, after the first COVID-19 case arrived in Syria, via Lebanon, after departing from Europe.  On March 26, the curfew was instituted, for stay at home orders across the country from 6 pm. To 6 am.  Also banned are large gatherings, such as weddings, funerals, churches and mosques services.

The United States of America’s assistance to Syria

According to official US government websites, they state the following concerning the US assistance to the Syrian people:

“The United States has committed an additional $16.8 million for humanitarian programming for Syria under USAID’s $274 million fund for countries affected byCOVID-19. Since 2011, the ‘US Agency for International Development’ has provided over $5 billion of the $9.5 billion US government humanitarian and stabilization assistance to the people of Syria. The US is the leading donor of humanitarian assistance in response to the Syria crisis and also provides funding for stabilization programs inside Syria.”

“USAID assistance reaches 5 million Syrians every month, and provides critical life-saving support across all of Syria’s 14 governorates.  The United States will not provide any reconstruction funding to regime-held areas in Syria. The US works with local officials, civil society organizations, and private sector actors works closely with trusted and vetted local organizations. USAID also helps support the White Helmets, through a multi-donor funding mechanism supported by fourteen countries benefiting over 8 million Syrians.”

The US only helps Syrians who are living under terrorist occupation, or who are living abroad in refugee camps in Turkey, Jordan or Lebanon. The 14 million Syrians who never left home, and who refused to follow ISIS or Al Qaeda, are never going to see even one loaf of bread or one aspirin from the US assistance.  The USAID is strictly to support regime change, using terrorists as the ‘boots on the ground’.  The US official website shows a photo of school children, and the caption reads, “Syrian children attend class in a classroom district of Jisr al-Shughur, mostly rebel-held Idlib province, on January 30, 2019.”  Idlib province is controlled by HTS, the Al Qaeda affiliate in Syria.  There are no rebels in Syria.