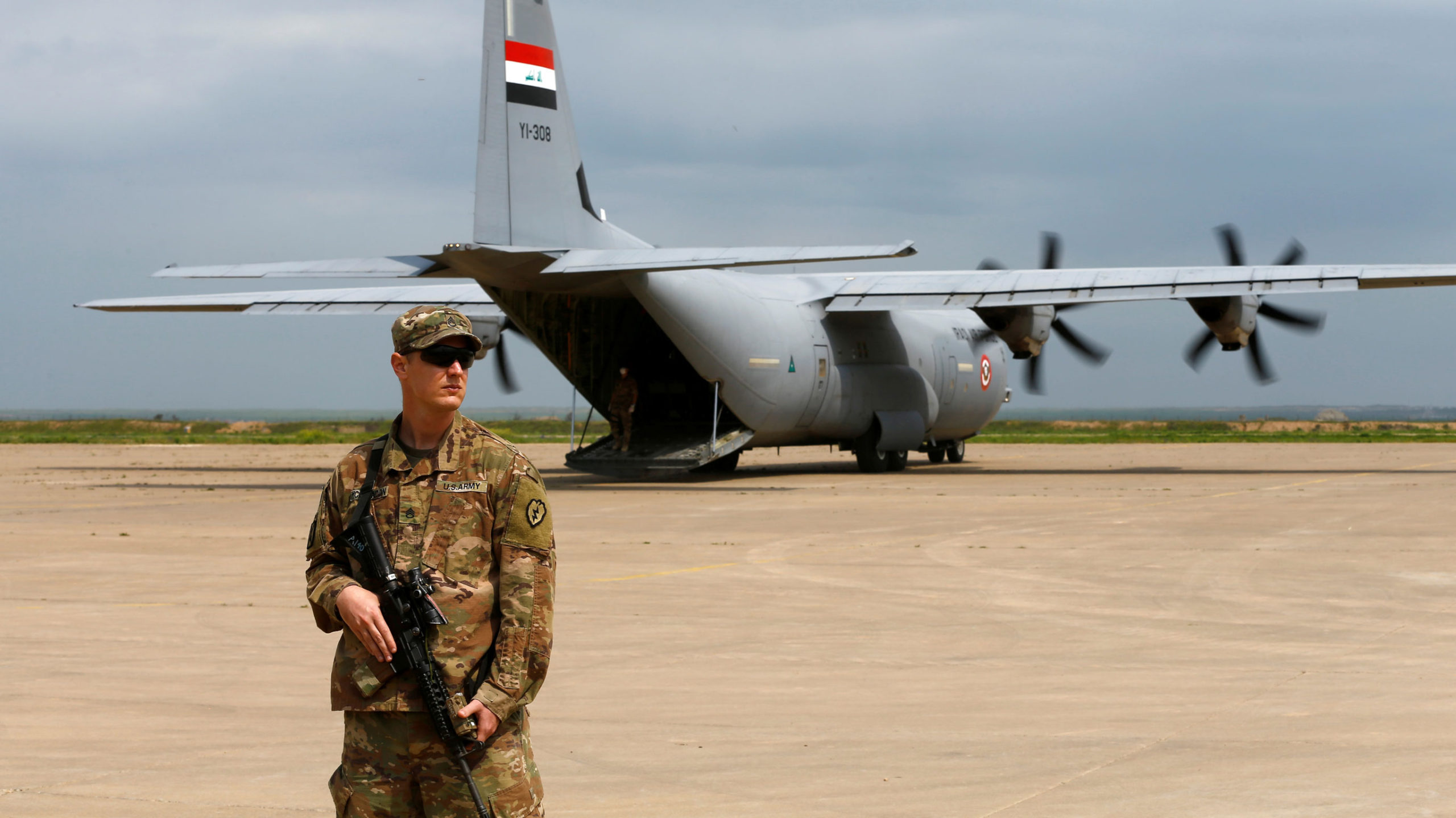 Late last month, the US-led international coalition’s headquarters in the northern Iraqi province of Nineveh near the Syrian border was reportedly transferred to the Iraqi Army, who earlier took over several local military bases left by coalition troops.

Colonel Myles Caggins, spokesman for the combined Joint Task Force – Operation Inherent Resolve (CJTF-OIR), has announced that the US-led anti-terror coalition is leaving an air base located in central Iraq.

He tweeted on Saturday that “after months of planning”, at least 500 CJTF-OIR troops had departed the Taqaddum (Habbaniyah) Air Base, transferring $3.5 million in property to the Iraqi government, and that the Iraqi Ministry of Defence “remains strong against Daesh* in Anbar Province”.

The withdrawal comes after the Iraqi news outlet Baghdad Al Youm reported on 30 March that coalition force headquarters in the country’s northern province of Nineveh near the Syrian border had been transferred to the Iraqi Army.

According to Baghdad Al Youm, the handover took place as part of the process of withdrawing foreign troops from a spate of Iraqi provinces.

This followed Brig. Gen. Vincent Barker, the sustainment director of the CJTF-OIR, saying late last week that the coalition had transferred the K1 Air Base in the northern province of Kirkuk to the Iraqi Armed Forces.

He pledged that the base “will continue to be a key location in our partnered efforts to eliminate the evils of Daesh”, adding that the transfer was coordinated with the Iraqi government and is “possible thanks to the efforts and successes of our ISF [ Iraqi Security Forces] partners”.

The coalition, in turn, referred to a successful campaign against Daesh conducted by the Iraqi military as the reason behind the transfer of the air base. According to the CJTF-OIR, the move was pre-planned and not related to the spread of the coronavirus in Iraq or recent attacks by Shiite militias against Iraqi bases hosting foreign troops.

The transfer was preceded by US forces formally handing over control of the Qayyarah Air Base in Iraq’s Nineveh Province to the ISF last week, in what Barker described as “another milestone for the anti-ISIS [Daesh] international military coalition and our Iraqi Security Forces partners”.

He touted the air base as “a hub for the Iraqi Air Force”, which continues “to deliver lethal strikes on Daesh bed-down locations”.

The developments come as tensions involving the US in Iraq escalated after the assassination of the Islamic Revolutionary Guards Corps’ (IRGC) top general, Qasem Soleimani, and Kataib Hezbollah founder Abu Mahdi al-Muhandis in an operation at the Baghdad International Airport sanctioned by President Donald Trump on 3 January.

The killing further exacerbated Washington-Tehran tensions, which have been simmering since the White House’s unilateral withdrawal from the 2015 Iran nuclear deal, or the Joint Comprehensive Plan of Action (JCPOA), and reinstatement of US anti-Iran sanctions in May 2018.

Since Soleimani’s assassination, facilities in Iraq hosting coalition troops have repeatedly come under attack, which the Pentagon is blaming on Kataib Hezbollah, an Iraqi Shia paramilitary group that is part of the Popular Mobilisation Forces, reportedly supported by Iran.

The attacks were the latest in a series of such strikes after 8 January, when Iran launched several dozen missiles at the Erbil Air Base in the country’s north and the Ayn al-Asad Air Base west of Baghdad. Although President Trump said the US “suffered no casualties” from the attacks, the Pentagon later admitted that more than 100 American servicemen were diagnosed with traumatic brain injury stemming from the strikes.

Iraqi authorities, in turn, warned the US and other foreign forces against using attacks on the coalition troops as a pretext for unauthorised military action in Iraq. While the US military claimed that they had consulted with Baghdad about the “defensive” strikes, it remains unclear if Iraq approved the raids.

Earlier this year, Iraq’s parliament voted to expel the estimated 5,000 US troops stationed in the country following Soleimani’s assassination, but the White House has repeatedly ruled out a total withdrawal, insisting that American forces would exit Iraq “on its own terms”.