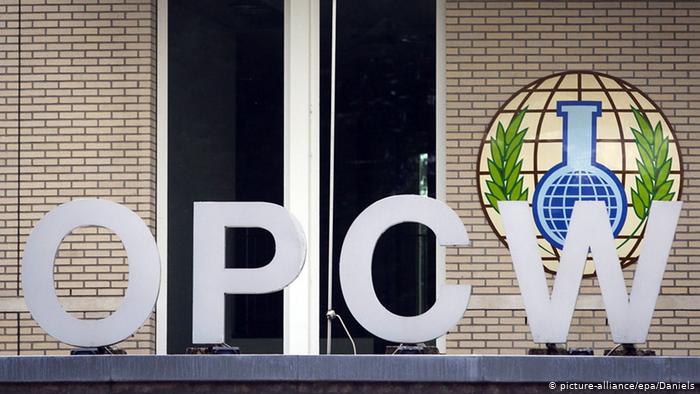 The OPCW is used as a political tool against Syria

OPCW Fact-Finding Mission (FFM) has determined that chemical weapons have been used or likely used in Syria. The first report of the OPCW was released April 8 and points a finger at the Syrian Arab Air Force concerning 3 attacks which occurred in Ltamenah, on March 24, 25, and 30, in 2017.

The report claims the investigation team conducts its activities in an impartial and objective manner. The only reason to believe the conclusion of such a report would be the belief that the team is honest, unbiased, and has no political agenda.

There is no proof presented and the 82-page report clearly states that they are not a legal body with the authority to assign criminal responsibility. The Investigation and Identification Team (IIT) Coordinator, Mr. Santiago Oñate-Laborde remarked that the investigative team has concluded that there are reasonable grounds to believe a chemical was used in the attacks.  He further added, “In the end, the IIT was unable to identify any other plausible explanation.”

In the report, other plausible explanations were identified, but the report sticks with the personal opinion of one person who has some military experience, though is not identified. The report stated: “a military expert advising the IIT noted the use of chemical weapons in this area would not be inconsistent with a strategy aimed at inflicting terror on both civilians and combatants, at eliminating infrastructure such as the medical facilities required to continue fighting, and at ensuring that no one felt safe even behind the front lines proper. The IIT however also took into account that armed groups opposing the Government of the Syrian Arab Republic, on the other hand, might have had an incentive in “staging” a chemical attack against civilians and their own fighters, to blame the Syrian Arab Republic’s authorities.”

The report continued, that the alleged incidents in Ltamenah could potentially be explained through similar scenarios, including the ‘staging’ of an attack with sarin brought from elsewhere.  Also notable in the report, is the fact that the team never visited the site, and only spoke with 20 witnesses.

The Syrian Foreign and Expatriates Ministry released a statement on April 9.  “The Syrian Arab Republic condemns, in the strongest terms, what has come in the report of the illegitimate so-called Investigation and Identification Team, and rejects what has been included in it, in form and content,” the statement said, and added that Syria, at the same time, categorically denies using toxic gases in Ltamenah town or in any city or village, and affirms that the Syrian army has never used such weapons in the most difficult battles carried out against armed terrorist organizations.”

The Ministry of Foreign Affairs of the Russian Federation released a statement on April 9. “The authors of the report, and consequently the leaders of the OPCW Technical Secretariat, have thus become accomplices in the consistent violation of the basic principles and procedures of objective and unbiased investigations stipulated in the CWC, which requires the mandatory dispatch of experts directly to the sites of alleged incidents. The information gathered by the IIT mostly came from anti-government armed groups and pseudo-humanitarian NGOs affiliated with them, including the notorious White Helmets.” The statement further adds, “We have also noted that the report contains references to certain secret services data – apparently from the same states obsessed with a change of power in Damascus. There is no other word for it but misinformation.”

In March 2011, the US-NATO attack on Syria began with the goal of ‘regime change’.  The plan has cost billions, which was to remove the President Assad administration, which is part of the ‘axis-of-resistance’, and to replace it with a pro-US regime headed by the Muslim Brotherhood, such as was accomplished in Egypt.  However, Syria proved to be stronger than the CIA backed terrorists, and finally, in 2017 President Trump cut off the funding, but the US-NATO plan has not died a natural death.  It is being kept alive by artificial means: such as dubious reports of chemical use, which may illicit US-NATO military intervention, under the ruse of ‘humanitarian intervention’, such as was accomplished in Libya in 2011.

It was President Obama who handed the terrorists following Radical Islam with the scheme of using chemical use in Syria as the reason for a US military intervention.  Obama delivered his famous “Red-Line” speech and the terrorists took the bait. In East Ghouta they staged a chemical attack and filmed a video which was shown around the globe. An un-verified video almost caused the US military to attack Syria in a massive planned intervention.  Obama stopped short of ordering the attack when the UK military lab at Porton Down informed him the sarin used was not from Syrian military sources.  There are still many Republicans and Democrats in the US Congress who are united in their blame of Obama’s inaction. They blame him for being weak, although his actions were based on facts, not opinions.

The OPCW sent a team of experts to investigate allegations that a chemical attack took place in Douma on April 7, 2018. However, the report was discredited after an email was leaked to the well-known journalist Peter Hitchens, who confirmed the email was sent by a member of the team to his superiors, in which he exposes the report was ‘tweaked’ to intentionally misrepresent the facts.

A shocking video purported to show victims being treated in the hospital after the attack went viral, with major western media still showing the video whenever Syrian chemical attacks are mentioned.  However, the symptoms shown in the video are not consistent with what witnesses reported having seen and experienced that day.  This glaring inconsistency was intentionally stricken from the OPCW report.  Seemingly, once again, an unconfirmed video is believable.  If a picture tells a thousand words, a video tells a million.

Ian Henderson, a veteran OPCW inspector and specialist chemical engineer with military experience, visited the Douma site.  His investigation concluded there was a ‘higher probability that both cylinders were manually placed … rather than being delivered from aircraft’. Mr. Henderson stored a copy of his research findings in the ‘Documents Registry Archive (DRA) when it became apparent his work would be excluded from the final report.  After a senior OPCW official became aware of Mr. Henderson’s actions, the official sent an email to his staff saying: ‘Please get this document out of DRA … And please remove all traces, if any, of its delivery/storage/whatever in DRA’.

The OPCW has become a political tool for the US-NATO goal of ‘regime change’ in Syria.  Instead of being an independent investigative body operating on a basis of integrity, it has delivered reports which could have been written before the investigation.