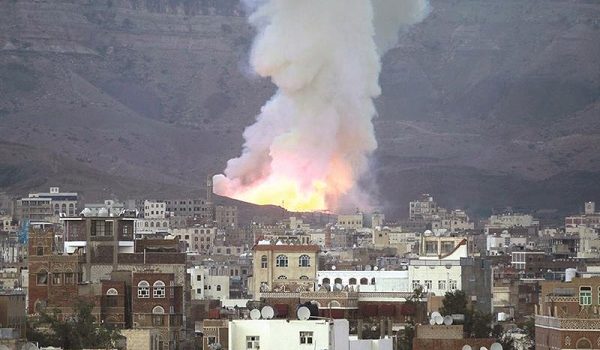 The Spokesman for Yemen’s Armed Forces has rejected a two-week ceasefire declared by the Saudi-led coalition, which is engaged in a brutal military campaign against the Arab country, saying the alliance has carried out over 200 airstrikes despite the truce announced last week.

Brigadier General Yahya Saree wrote in a post published on his official Twitter page on Thursday that Saudi-led forces have carried out more than 32 offensives and infiltration attempts since April 9, and that the operations were performed in the northern province of al-Jawf, central provinces of Ma’rib and al-Bayda, and the southern coastal province of Ta’izz.

Saree further noted that the Saudi-led coalition has mounted 230 airstrikes since last Thursday, and the aerial raids were launched in the provinces of Sana’a, Amran, Ma’rib, Bayda, Sa’ada as well as Hudaydah.

He pointed out that Yemeni armed forces will take practical measures to defended the country and nation, and deter the Saudi-led coalition from its acts of aggression.

Also on Thursday, several civilians, including women, sustained injuries when Saudi-led warplanes targeted a residential building at al-Qati’ area in the al-Marawi’ah district of Hudaydah province.

Elsewhere in the Razih district of Yemen’s northwestern province of Sa’ada, Saudi forces fired barrages of artillery rounds and mortar shells at houses and farmlands, causing damage. There were no immediate reports of casualties.

He said Yemen has seen an escalation in fighting and airstrikes carried out by the coalition at the same time that the siege of Yemen continues.

“The declared ceasefire is deceitful and meant to mislead the world public opinion. If there were a serious intention and absolute willpower towards peace, the UN Security Council should have passed a formal resolution to stop the absurd war on Yemen and lift the unjust siege; rather it sufficed to a worthless statement in order to appease the [Saudi-led] alliance,” Abdul-Salam added.

Saudi Arabia and a number of its regional allies launched the devastating war on Yemen in March 2015 in order to bring the country’s former president Abd Rabbuh Mansur Hadi back to power and crush Ansarullah movement.

The US-based Armed Conflict Location and Event Data Project (ACLED), a nonprofit conflict-research organization, estimates that the war has claimed more than 100,000 lives over the past five years

According to the UN, Yemen remains the world’s worst humanitarian disaster as nearly 80 percent of the population requires some form of humanitarian assistance and protection.

Ten million people are a step away from famine while seven million are malnourished, the world body says.

It has also warned that nearly 14 million people depend on humanitarian aid every month.