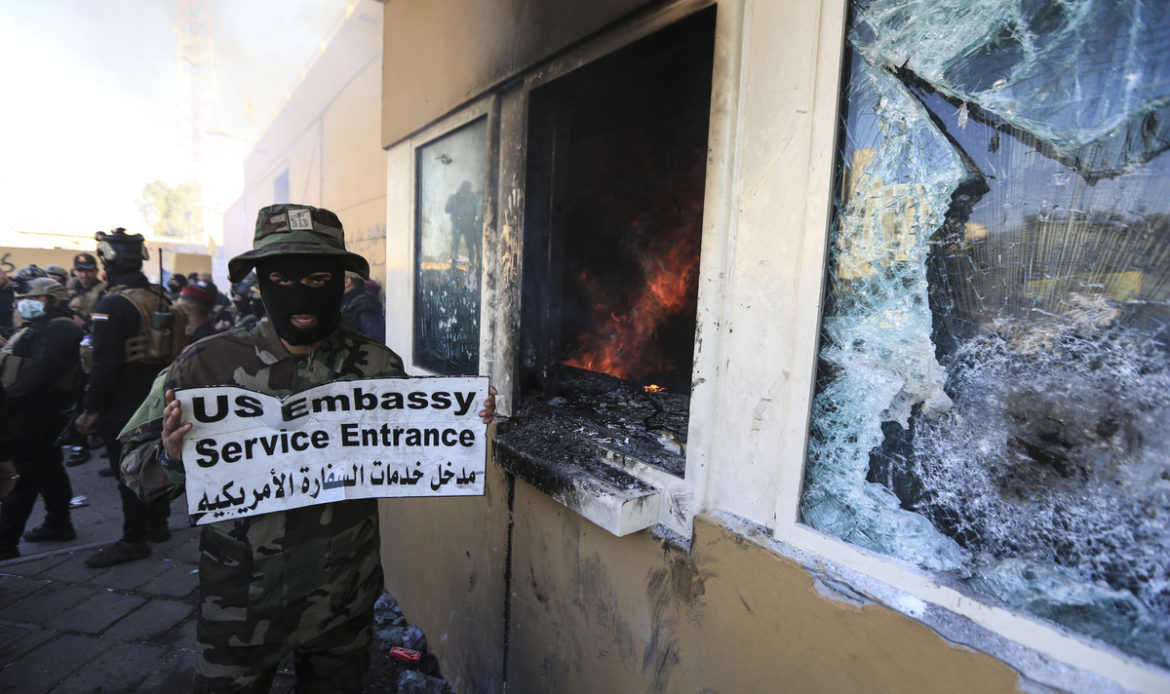 A line in the sand is drawn: the US military must leave Iraq

The chaos that Iraq is experiencing today has roots in the 2003 US invasion, which set-up sectarian divisions that have been used to keep the country in turmoil. The US foreign policy is based on creating chaos in Afghanistan, Iraq, Yemen, Libya, Syria, and Lebanon to further the US agenda.  Iraq today stands on the edge of breaking free of the shackles of US domination.

Iraq has a new Prime Minister

On April 19, the President of Iraq named former spy-chief Mustafa Kadhimi as Prime Minister-designate. Kadhimi announced on April 14 that he had selected a cabinet. He is expected to be approved by Parliament before to April 23, when the Holy month of Ramadan begins.  On April 13, the US stated support for the new government, but not without mentioning Shia and Sunni differences.

In a statement to the media, Kadhimi said, “We have no choice but to work on a comprehensive Iraqi national project, which transcends sub-identities, whether ethnic or sectarian.” He added that a top priority was to negotiate with the US concerning their military presence, stressing that ‘Iraq is not an arena for settling scores’.

Kadhemi faces serious challenges concerning the COVID-19 crisis, and the economic crisis following it, as well as record-low oil prices.  As of April 14, the country has registered 1,400 COVID-19 cases and 78 deaths, according to the health ministry.

The shah of Iran was a close US ally and many would classify him as the definition of an “American Puppet”.  However, the Iranian grass-roots revolution in 1979 saw the US-backed regime toppled.  While the Shah was on his peacock throne, the US had never discussed Sunni-Shia differences. Iraq is a Shia majority, and neighbor of Iran, with shared historical, geographical and religious experiences. The Sunni-Shia divide didn’t exist in Iran, or Iraq, or Syria before the US state department, and their co-workers in the CIA developing the hatred to be used as their tool. The US used Arab media to replace ‘Israel’ with Iran as the ‘enemy’, thus pushing the occupation of Palestine into the oblivion.

Seventeen years ago, on March 19, 2003, the United States of America attacked and invaded Iraq.  The US destroyed most of the Iraqi infrastructure and occupied the country for eight years, withdrawing troops in 2011, after having spent nearly $2 trillion in war-related costs.  The Bush administration had been high-jacked by a group of extremists, including Richard T. Perle, who had worked for Israeli PM Netanyahu in 1996. The group controlling the White House in 2003 had wanted to create a ‘New Middle East’.

The US killed an estimated 600,000 Iraqi civilians during the early stages, which fueled sectarian violence and the rise of religious militants.  The Iraqi people have suffered almost two decades of violence and chaos which was the aftermath of the invasion, and the failures of the US occupation.  Paul Bremer, the American installed dictator of the occupation, caused Iraq to be divided along sectarian lines.

In 2014 the US troops arrived again in Iraq, but this time to fight ISIS, which was defeated in 2017.

On January 3, President Trump ordered the assassination of Qassem Soleimani, the head of Iran’s elite Quds Force. Also killed was Abu Mahdi al-Muhandis, who founded Iraq’s Kataib Hezbollah unit after the 2003 US invasion. The killing was a breach of the 2014 agreement between the Iraqi government and the US, concerning the re-entering Iraq to fight ISIS. The Iraqi government, military and resistance groups all were shocked at the magnitude of the drone strike.  Sayyed Ali Khamenei of Iran said, “The price of the assassination of Qassem Soleimani and Abu Mahdi Al-Muhandis is the US departure from West Asia.”  This marked a line being drawn in the sand: the US must be forced to leave Iraq, regardless of the cost.

Iraqi Parliament orders US troops out

Two days after the Trump ordered assassination; the Iraqi Parliament met and passed a resolution demanding the complete withdrawal of all foreign troops from Iraq.  Driving the US out of Iraq is their goal.

PM Abdul-Mahdi asked parliament to take “urgent measures” to ensure the removal of foreign forces from the country, and he later met with US Ambassador Matthew H. Tueller and stressed the need for the two countries “to work together to execute the withdrawal of foreign troops from Iraq,” and added the situation in Iraq was “critical”.

US Embassy  and bases attacked

Iraqi soldiers attacked the US Embassy in Baghdad on December 31, 2019, in retaliation for US attacks on Iraqi military bases which resulted in the deaths of dozens of soldiers.  These soldiers had been US allies in Iraq during the fight to defeat ISIS. In January more attacks took place on the Embassy, and in February attacks continued, with the latest attacks occurring in late March, resulting in the US State Department ordering some Embassy employees to leave the country.

By early April, David Schenker, assistant secretary of Near Eastern Affairs, stated that Iraqi military groups have been regularly shelling bases in Iraq which house US troops, as well as the US Embassy area, and this poses a significant threat to US forces in Iraq.  Schenker voiced the US disappointment in the Iraqi military for not being able to protect the US military in Iraq.

Recently, three rockets landed near an area housing workers of the US oil service company Halliburton, which was brought into Iraq by VP Dick Cheney in 2003, in the looting of oil resources of Iraq made possible by the unprovoked invasion.

New videos have emerged on the internet from organizations determined to drive the US troops out of Iraq. The videos employ drone footage of the various bases the US troops are stationed at, and the message is clear: the unwelcome foreign Army is not secure as long as they remain in Iraq.

The US withdrawal begins

An Iraqi member of Parliament, Ali al-Ghanimi, told the media that US troops have begun to consolidate their presence in two large Iraqi bases: one in Erbil in the North and the other in Ain- al-Assad airbase.  Al-Ghanimi reported the US troops previously had been scattered among 15 military bases, and he saw the consolidation of troops as a sign of beginning an ultimate total withdrawal.

US Ambassador Matthew Tueller met with caretaker Prime Minister Adil Abdul-Mahdi to discuss the issues surrounding the US military presence in Iraq, and the need for discussions between both countries.  US Secretary of State Mike Pompeo has proposed a large meeting in June to agree upon the mechanism of withdrawal of troops.  Some Iraqi military units have promised to not attack US troops while the US exhibits sincere efforts to leave Iraq.