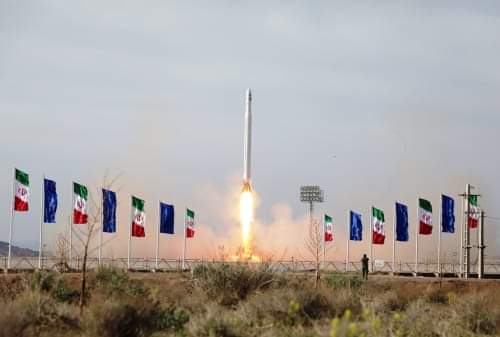 Despite US sanctions, Iran launches military satellite for defense

On April 22, the 41st anniversary of the establishment of Iran’s Islamic Revolution Guards Corps (IRGC), they launched the ‘Nour’ satellite, aboard the ‘Qased’ three-staged satellite launcher, during an operation located in the desert at Dasht-e Kavir.

IRGC commander General Salami said, “Today, we gaze upon the Earth from skies. This honorable moment is the starting point of the establishment of new global power.” He added, “Today, the world’s powerful armies do not have a comprehensive defense plan without being in space, and achieving this superior technology that takes us into space and expands the realm of our abilities is a strategic achievement.” His comments stressed the term ‘defense’ and described the multi-purpose satellite’s use in space in the realm of information technology and intelligence battles, including reconnaissance and safe communication capabilities.

The successful launch of the Nour gave the Iranian people a chance to feel pride and hope, in the face of the COVID-19 pandemic, which has killed more than 5,290 people in Iran, with over 84,800 reported cases.  The satellite orbits 425 kilometers above Earth, while many around the globe are on stay-at-home orders, and dealing with the mental constraints of ‘cabin-fever’.  Iranians may see the satellite as a bit of good news despite the struggling economy and historically low oil prices.

Iran is now one of 15 countries that can put military satellites in space, and even though the US has placed the most severe sanctions in history upon Iran, still their engineers and scientists continue to produce technology “MADE IN IRAN”.  They have an advanced program that has launched satellites in the past, including joint research projects with other countries. ‘Omid’, was their first a domestically made satellite that was sent into orbit in 2009, and Iran launched imaging satellites in 2011 and 2012.

Tensions with the US

In 2018 President Trump pulled the US out of the international deal which the US was a partner to, designed to prevent Iran from making a nuclear weapon. Iran has continued to state they do not seek to create or use nuclear weapons. That action by Trump was the beginning of the tensions which are being felt in the Middle East today.

One of the main sources of tension between the Trump administration and Iran is the influence and pressure of the American Israel Public Affairs Committee (AIPAC) and some of the oil-rich ‘Arab Gulf’ countries, such as Saudi Arabia.  AIPAC and their Arab allies put pressure on Trump to withdraw from the Iran nuclear deal, and they tried to push the US military into aggression against Iran.

Trump’s decision to withdraw set off a series of attacks and Trump ordered the assassination by a drone attack in January of the top Iranian General Qasem Soleimani in Baghdad. Iran answered back with ballistic missiles struck at US troops in Iraq.

The US says the satellite launch by Iran defies a UN Security Council resolution.

There is a political faction in the US, with close ties to Trump, who are pushing for a full-fledged war between the US and Iran. The two nearly went to war earlier this year after Trump ordered the assassination.  Experts have cautioned that a mistake or accident could plunge the region into a military conflict which could turn regional, if not global as allies of the US, and Iran would be forced to take sides.

The US Navy released a video last week which they claim shows Iranian speed-boats making harassing maneuvers close to US Navy warships in the North Arabian Sea, with one boat coming within yards of the US ship.  In the video, the Iranian-flagged boats are manned with a gun; however, the guns were never pointed at the US ship, which sounded its horn several times.

The IRGC acknowledged that events in the video happened; however, they downplayed the seriousness and felt the US was exaggerating.

“I have instructed the United States Navy to shoot down and destroy any and all Iranian gunboats if they harass our ships at sea,” Trump wrote.

Trump is facing a tough election in November, and his supporters demand he maintains his hard-line stance against Iran.  His supporters have been mentally molded into an opinion pattern that AIPAC has invested in for years. The option of negotiation and peaceful resolution of the tensions between the US and Iran is never discussed.  Sanctions, threats, and attacks are in the Trump diplomatic tool-box.

Iraq’s Parliament responded to the Trump ordered assassination by passing an order for all US troops to leave the country. Secretary of State Pompeo has a meeting in June slated to discuss the withdrawal from Iraq.  Earlier this month, Trump claimed that Iran was planning an unprovoked attack on US troops in Iraq, and he threatened Iran would pay a heavy price if they did so.

While Iran was ruled by the US ‘puppet’, the Shah of Iran, there was no Sunni-Shia divide; however, once the 1979 Islamic revolution occurred in Iran, the US State Department, and the CIA, began fueling sectarian hatred between the Sunni and Shia in the Middle East.  Before 1979, Iran had been under the US sphere of influence, but once they lost Iran the US targeted them with a sophisticated propaganda program, which aimed at replacing Iran as the enemy of the Arabs, and not Israel. This propaganda campaign was so successful, that today we see the ‘Arab Gulf’ monarchies cooperating with ‘Israel’ on the economy, security, and political issues.