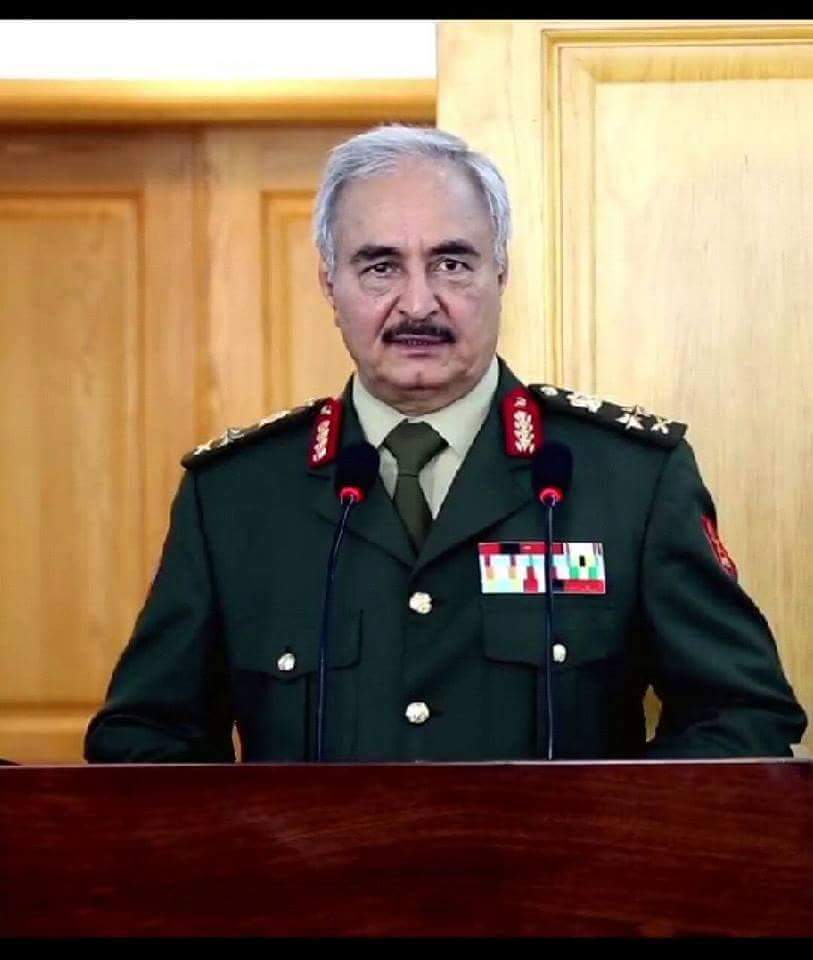 In his speech, he held the Presidential Council fully responsible for losing the sovereignty of the country to Turkish invaders and terrorists and called for the complete rejection of the Libyan Political Agreement.

Below is the English translation of his entire statement:

“To all the Libyan people,

“Operation Dignity” was launched in 2014, and today it has become a revolution due to the pivotal changes that have led to a better future. Your Armed Forces have sacrificed everything to free your country from terrorism. This has come at a cost of hundreds martyred and thousands injured.

Terrorism spread throughout the country, they targeted what had remained of the Army and security forces in an attempt to control the country. The terrorists committed the vilest of crimes, assassinating activists, journalists, lawyers and key social figures.

Our country lived in fear, horror and despair, its institutions failed, and the country became a huge catastrophe affecting all areas of life. We have faced a lot of traitors, plots were planned against our officers and soldiers, many of them were assassinated, our weapons and vehicles were stolen as the extremists worked on diminishing our role as an army. But we did not surrender, we decided to retreat, and as the heroes answered their country’s call we decided to confront the extremists under extremely difficult circumstances.

The Army, with the support of the Libyan people and the young men who gathered from all parts the country, announced it would fight the terrorists. We defeated the terrorists in Benghazi, in the Oil Crescent, in Derna, and in Central and Southern Libya. Stability was brought to these areas and residents are now able to live their normal lives.

Your Army today continues its war in Tripoli, the liberation of Tripoli will be the culmination of this long-fought struggle. Your armed forces continue their battles today, but it has not turned away from rebuilding the Army.

We are proud of where we are today. Our Army is professionally organised, well-equipped, and our officers and soldiers are as determined as ever. We have managed to defeat terrorism, built an army capable of protecting the Libyan people in their cities and towns, whilst securing governmental institutions, oil fields and ports.

The political and economic situation of the country is dire. This is due to the failure of the  Presidential Council which has committed many crimes, they have committed treason. Their legitimacy is fake, they lost Libya’s sovereignty, destroyed its economy and stole the Libyan people’s wealth, They decided to support extremist groups and financed them using Libya’s oil revenues. Our brave soldiers liberated the oil fields with their blood.

The Presidential Council flooded Libya with mercenaries in an attempt to fight our Army. Their most serious act of treason was when they asked Turkey to invade and occupy Libya, along with the extremist militias in Tripoli.

Today, the Presidential Council welcomed the actions of the extremist militias in Surman and Sabratha who have committed violent crimes against its residents. And it continues to support them, proving their direct relationship to terrorism and conspiracy against Libya. We would like to let them know that this will end very soon.

To all the Libyan people,

The tragic situation in Libya and the suffering of the people have reached their climax which leaves no choice for the Libyans except to clearly announce the rejection of the Political Agreement and all the institutions that originated from it. We call on you to authorise the institution that you think is right one to lead the country during this time.

We need to work towards building a civil country that all Libyans can look forward to. We call on you to make this historical decision, through your local councils, civil society organisations and various associations in your cities, to get Libya back on track. We promise to you that your Army will be ready to protect and support your decision and that we will continue to liberate the whole of Libya.

Glory to all our martyrs. The traitors of our nation will continue to live in shame and disgrace.”