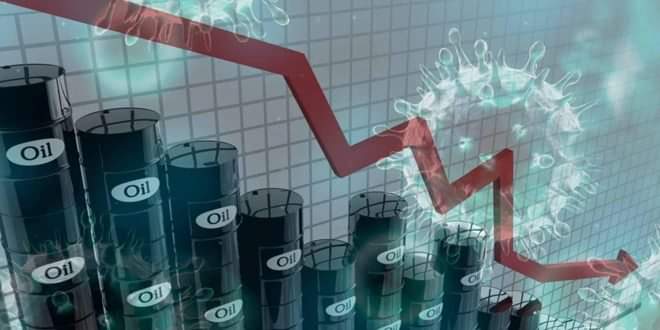 ‘Moving into End-Game’: Production Shut-Downs Cited as Next Chapter of COVID-19-Driven Oil Crisis

The ongoing coronavirus pandemic, which has halted economic activities and travel, has crippled demand for crude, resulting in an oil glut and sending prices plunging, heralding more shocks to the industry.

Amid the destructive economic fallout from the COVID-19 pandemic, production shut-downs in the petroleum industry are imminent, writes Bloomberg.

Nosediving crude prices, oil stored offshore in tankers after refineries closed down over the coronavirus lockdown with experts concerned the world could run out of storage by May – these are just a few of the chapters in the currently unfolding oil crisis, which is about to enter a new phase.

Shut-downs in the industry are an unavoidable, albeit worst-case scenario for producers and refiners.

“We are moving into the end-game… Early-to-mid May could be the peak. We are weeks, not months, away from it,” the outlet cites Torbjorn Tornqvist, head of commodity trading giant Gunvor Group Ltd., as saying.

The coronavirus pandemic triggered a succession of dramatic phases.

As countries scrambled to slow the spread of the disease and avoid a collapse of their national health facilities, they installed protocols such as lockdowns that resulted in closed factories and staff sent home.

Overtime, the storages started filling up due to oversupply caused by life as we know it grinding to a halt, with borders shut and travel restricted.

Traders sought recourse in huge ocean-going tankers to store crude as they held out hopes for a resurge of prices ahead.

However, surging shipping fees and lack of available free tankers is a sign of what the future holds, claim experts.

A collapse in global demand for crude, and concerns over looming production shut-downs and the inevitable fallout impacting jobs, companies, banks, and local economies incentivized Saudi Arabia, Russia and other petroleum-exporting nations within OPEC+ to agree to slash their oil production by 9.7 million barrels per day, or over 20 per cent, through June, in a deal penned on 9 April.

However, the efforts failed to stop crude plunging to below zero in trading on 20 April, when the price for May oil contracts broke every low for oil prices since 1946.

After the price plunge on Monday, when West Texas Intermediate tanked to -$40 a barrel, market experts predict that the US shale industry will lead the new shut-down phase.

Prior to the pandemic, oil companies ran about 650 rigs in the US, with over 40 percent ceasing operations by 24 April, leaving only 378.

“Monday really focused people’s minds that production needs to slow down. It’s the smack in the face the market needed to realize this is serious,” said Ben Luckock, co-head of oil trading at commodity merchant Trafigura Group.

The expert believes that output in Texas, New Mexico, North Dakota and other states will nosedive much faster than expected in a reaction to negative prices persisting for several days in the physical market.

Before the oil price collapse, the belief was that output would drop by about 1.5m barrels a day by December.

“The severity of the price pressure is likely to act as a catalyst for the immediate turndown in activity and shut-ins,” said Roger Diwan, oil analyst at consultant IHS Markit Ltd.

Plans to shut in production have been voiced by ConocoPhillips and shale producer Continental Resources Inc.

In North Dakota oil producers have already closed more than 6,000 wells, curtailing about 30 percent of the state’s total.

Beyond the US, say market analysts, producers are either reducing or mulling output cuts.

“I wouldn’t want to get sensational about it but yes, clearly there must be a risk of shut-ins… In certain parts of the world it is a real and present risk,” warns Mitch Flegg, the head of North Sea oil company Serica Energy.

Every week, 50 million barrels of oil are being stowed away, at a rate that might see the world run out of storage by June, writes Bloomberg.

Before the crisis hit, the world was consuming about 100 million barrels a day, with demand now at around 70 million barrels.
This, predict analysts, would suggest a third of global output being shut down to deal with the crisis.

Experts cautiously predict that as storage would serve to “bridge the gap between supply and demand”, and forecasts suggest oil consumption has already hit a bottom, a “gentle recovery” might lie ahead.

The shutdown will affect oil refining as well, predict experts, as last week one of the largest refineries in the US, Marathon Petroleum Corp., announced it was halting production at a facility outside San Francisco.

A similar decision was taken by Royal Dutch Shell Plc, affecting a number of units in three US refineries in Alabama and Louisiana, and refineries in Europe and Asia operating at half rate.

“No one is going to be able to dodge this bullet,” Steve Sawyer, director of refining at Facts Global Energy, was cited as saying, predicting global refineries could halt up to 25 percent of total capacity in May.