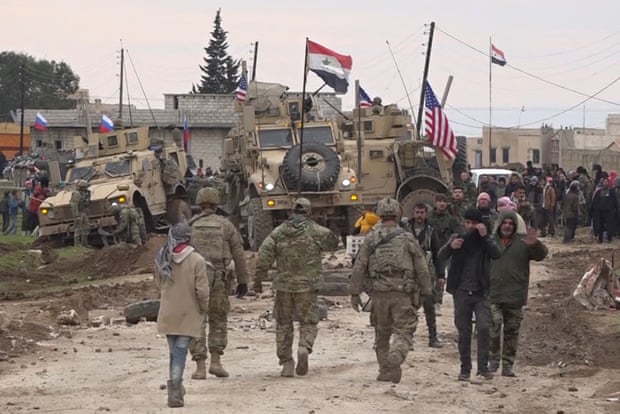 Syrian resistance to the US occupation escalates

US President Trump ordered a surprise withdrawal of US troops from Syria in October 2019; however, he bent to pressure from aides and Pentagon officials and soon reversed his decision. He then ordered about 500 US soldiers to occupy the Syrian oil fields to steal the oil, regardless of the violation of international law, or the reflection of state-sanctioned crime on the image of America.

As the US armored vehicles left Qamishli in October, the locals threw rocks and rotten vegetables at them. The US had ditched its local allies, in favor of oil revenues. ISIS was no longer an enemy, and the Kurdish militia was no longer a partner. Now, six months after the US pullout of the northeast of Syria, the US forces are confronted by angry locals, deadly attacks, and the COVID-19 virus.  It appears the days of the US illegal occupation of Syria are numbered.

Ryan Goodman, the co-editor of ‘Just Security’ and a former Pentagon legal adviser filed a request under the Freedom of Information Act for the number of military and civilian defense personnel assigned to Afghanistan, Iraq, and Syria because the Trump administration has stopped reporting them publically since December 2017.  He said, “Providing this information would be a show of respect for the American public, who ultimately must decide what sacrifices our country should make in sending troops into war.”

“The United States Government and all its institutions represent and are accountable to the American people,” wrote Chuck Hagel, former Secretary of Defense, in support of the requests.  Trump had made a campaign promise in 2016 to bring US troops home from Afghanistan and the Middle East but has failed to keep his promise to his supporters.   With the 2020 election fast approaching, those troop numbers are being guarded like ‘top-secret’ files.

According to the Pentagon, 3,500 active duty US military personnel have tested positive for COVID-19, with 85 hospitalized, and 2 deaths. The numbers jump to more than 5,700, with 25 deaths when you include civilian employees, contractors, and military dependents.

Health experts fear that COVID-19 could spread like wildfire across Syria, and US troop movements or rotations could help to spread the virus, as Iraq has a very large number of cases and there are US troops there as well.  Movement of US troops between Iraq and Syria could be lethal for Syrians as well as American soldiers.

The first reported death from COVID-19 in Syria occurred in Qamishli which is the same region some of the US troops are present. The Syrian Ministry of Health works closely with the WHO and has a central lab for testing in Damascus.  However, the northeast of Syria, and Qamishli in particular, are not under the direct control of the central Syrian government.  The northeast of Syria is in chaos, as Russian, Syrian, Turkish, Kurdish, and US forces are all present, but not all working together.  The rest of Syria is calm, stable, and prepared to face COVID-19.

“This epidemic is a way for Damascus to show that the Syrian state is efficient and all territories should be returned under its governance,” analyst Fabrice Balanche said.

The pandemic may contribute to the departure of US troops from Syria and Iraq, where the Iraqi Parliament called for US troop withdrawal.

The Russian Foreign Ministry spokeswoman, Maria Zakharova, said on April 23 there are reports of COVID-19 cases among the US troops in Syria, who are there illegally under international law.  “This means that Washington bears full responsibility for the civilian population and provision for their humanitarian needs on territories under its control east of the Euphrates and in the south near Al-Tanf, where the notorious Rukban camp for the internally displaced people is located,” she said.

Khirbet Ammu is an Arab village just east of Qamishli.  The Kurds, a minority in Syria, were the US partners on the fight against ISIS, but the local Arabs were not partners, and they are the majority in Syria. This village remained loyal to the Syrian government throughout the war years.  On February 12 a US military patrol got stuck in the mud, and another of their trucks had a flat tire. The US soldiers may have taken the wrong turn, down the wrong road, because they found themselves stuck and under fierce attack by armed residents shouting: “What do you want from our country? What is your business here?” One resident was killed, and another wounded when the US forces fired at the villagers.

Brett H. McGurk has served in senior national security positions under Bush, Obama, and Trump as the Special Presidential Envoy for the Global Coalition to Counter ISIL.  He commented on the Khirbet Ammu attack as an example of a deepening quagmire for US troops.

On March 23 a US military convoy was stopped at Hamo, a village near Qamishli, where the 11 vehicles were forced to turn around and find a different route.  The Syrian Arab Army, which is the only national army in Syria, was assisted by the locals in an act of resistance.

An officer in the US Army was reportedly killed on April 6 in the town of Al-Sur, near the village of al-Wasi’a, in the countryside of Deir Ez Zor, where the US troops were ordered by Trump to steal the oil.  Also reportedly killed in the ambush were two Kurdish militiamen, formerly partnered with the US. The deaths occurred during an ambush by locals on the foreign military convoy.

Joshua M. Landis is an expert on Syria, and was aware of the reported incident; however, his Twitter account had a post from the US military denying the death, and accusing the Saudi Arabian media ‘Al Hadath’ with spreading false information.

A former senior officer in the US-backed mercenary unit Maghaweir al-Thowra (MAT) deserted his unit in Syria on April 14.  Samir Ghannam al-Khidr deserted the Eastern Syrian desert along with his whole family and 26 armed men.  The convoy was subject to a video on social media, which showed 8 pickups, 1 truck, 11 small arms, including 5 M-16 rifles, 4 large-caliber machine guns, 5 grenade launchers, and 6-7 thousand rounds of ammunition.  All of the vehicles and weaponry were US military property. Al-Khidr left the illegal US base at Tanf, which is home to about 200 US soldiers, and about 100 mercenaries of MAT. Previous desertions occurred in early April.

Locals in the village of Abu Qasaib forced the US troops to turn their convoy around on April 16 and go back to their illegal base. It appears the local resistance to the military occupation of Syria is gaining momentum.

The US military was seen crossing illegally from Iraq into Syria at al-Walid, on their way to Hasakah on April 18.  The US convoy consisted of about 35 trucks, carrying military and logistical equipment to steal the oil reserves and loot other natural resources in Syria.

The US military convoy was attacked with stones on April 22, by locals in the village of Farafrah, near Qamishli, who had set up a road-block.  Men and boys chased the Americans on foot while shouting, “Go back to where you came from.”

On April 27, a US Hummer vehicle that carried American troops was attacked by locals in Deir Ez Zor.  The vehicle was later found completely burned, but it is not known what became of the troops who were being transported to the important oil fields of al-Omar and al-Tank, which are being occupied by the US military, on orders by Trump to steal the oil.  ‘Al Mayadeen’ media reported the names of one sailor and one soldier, with eye-witness information that the two Americans were kidnapped.